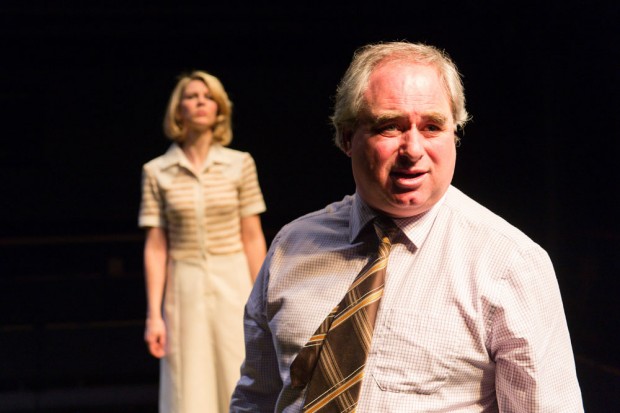 Birdwatching is not the most thrilling subject for a drama. In fact, next to watching paint dry, it is probably the poorer option. So there is something wonderfully clever, amazingly unexpected and theatrically brilliant about Robert Holman’s 1977 play, which takes place at a popular birdwatching spot overlooking the mouth of the Tees, a location around which several lives meet and connect. You can see why this 90-minute play won Holman the prestigious George Devine Award, and it’s great that it has finally been revived in an absorbing touring production by Alice Hamilton for Up in Arms theatre company.

The birdwatching spot is an area of rough grassland, beautifully rendered by designer James Perkins, called South Gare, a promontory that juts out into the North Sea. Down below are the German Skerries, a group of partially submerged rocks that got their name during the second world war when a Luftwaffe plane crashed into them. The play revolves around two regular birdwatchers, 59-year-old schoolteacher Martin and 23-year-old Jack, a factory shift-worker, who meet here one summer afternoon. They make a neat contrast, the older man at the end of his career and the younger man at the start of his. The older man educated and an educator; the younger man with no qualifications. And the older man disillusioned with marriage; the younger man just starting married life. Yet they also have something in common: the sense that something is not right with their lives.

As German Skerries seemlessly unfolds, and I mean seamlessly (there is not an awkward or unbelievable moment in the whole play) they are joined by two other characters. The first is 34-year-old Michael, who once worked as a pilot for the ships on the River Tees, but now is employed by British Steel to help sort out some pipes that take boiling water from the nearby plant and pump it into the sea. This pollution of nature threatens to disturb the ecological balance, and thus the birdlife of the area, but the construction of these pipes has other, even more dramatic consequences which affect Jack and especially his young wife Carol, who works in the Middlesbrough tax office.

Holman’s writing is very delicate and subtle, and even the emotional highs of the play barely ripple the surface of the dialogue or muddy the inner lives of the characters. And this story is mainly a study in character, concerned with quiet intensity and deep but undemonstrative passions. The two main male characters both lack confidence and are both full of unrealised potential: the older one knows this, the younger one doesn’t. But if all the people in the play struggle to understand the elusive nature of happiness, this is not a pessimistic or bleak play. Towards the end, Holman is careful to give Jack a helping hand, and to give the audience’s hearts a tiny little squeeze. It feels like the most affectionate gesture in the world.

Like the German Skerries themselves, the play has hidden depths, with both a quiet solidity and a concealed sense of threat. What is immaculate is how well and completely naturally Holman weaves in the larger themes that affect his characters’ lives: the importance of education and qualifications; the struggle for workers’ rights; the emancipation of women. A picture of the North of England emerges that includes class antagonism, industrial accidents and memories of the second world war, as well as the role of the area as a global trading zone. Although sad in parts, the play also radiates a sense of optimism that is genuine and never shrill, that never feels forced.

Hamilton brings out the piece’s humour, which is as gentle as a mild breeze on a sunny day, and her cast do the play proud. Howard Ward’s Martin conveys the mild bewilderment of a man who feels that he has made a “wrong choice” in his life and who can make a statement such as “Most of us are lazy and afraid” sound like a guru’s aphorism. By contrast, George Evans’s Jack is all boyish charm and playground jokiness, yet already on the verge of grown-up responsibility, while Katie Moore’s Carol is a mixture of youthful openness and perceptive maturity. With Michael, Henry Everett has a smaller part, which he nevertheless delivers convincingly. This is a loving revival of a lovely play.