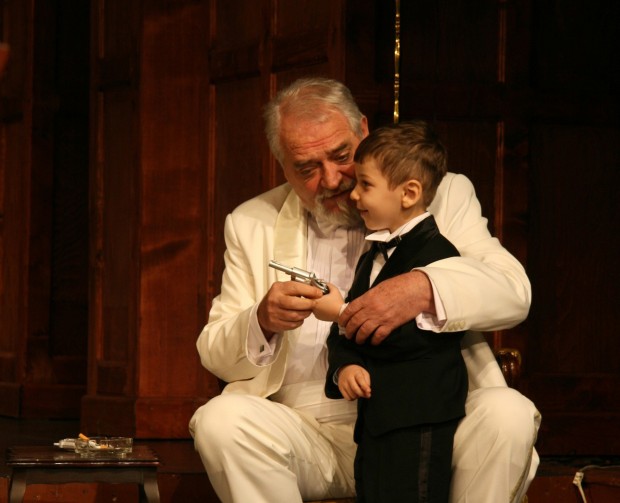 Family occasions can be fraught affairs, as playwrights from Harold Pinter to Alan Ayckbourn have convincingly proved, but the mother of all family meltdown dramas must be Thomas Vinterberg’s Danish Festen, a Dogme 95 film made in 1998. Soon after, this was turned into a stage play by Vinterberg and Mogens Rukov, which had an outstanding success in David Eldridge’s version here in 2004. Now a Romanian theatre company, Nottara, from Bucharest, bring their production of this contemporary classic to London.

At the start of the evening, we are welcomed chez Klingenfeld-Hansen (the Danish names remain unchanged). The family has come together to celebrate the father Helge’s 60th birthday — festen means a celebration. Guests include their oldest son, Christian, and their daughter Helene. Plus Michael, the wilder younger son, who gatecrashes the event: he’s in disgrace for not coming to the funeral of Linda, another daughter who has killed herself. As the eating and drinking begins, everything seems normal. And it is, until the time comes for the birthday speeches. When Christian gets up, he offers two choices of speech: the unwelcome truth and a convenient lie.

When the family choose the truth, Christian accuses Helge of child sexual abuse. Then all hell breaks loose. His mother Else begs him to apologise; Michael, his wife Mette and their child are in shock; the toast master doesn’t know what to do, and the servants suddenly become involved. Soon after, Helene’s lover — a rastaman — makes a surprise appearance and tests the family’s tolerance. A little later, Helene produces one of those staples of traditional European drama, the hidden letter, and a second circle of hell is revealed.

This large family is — like so many stage families — a microcosm of society. With its four generations, numerous servants, and complex sexual cross-currents, it is like a human pyramid, topped by the winners of this world — criminals who are able to get away with it — and built on the bent backs of the losers. In a wonderfully subversive moment, it is the servants that make sure that none of their betters can leave. But if Vinterberg and Rukov perform an autopsy on all that is rotten in the state of Denmark, this is also a story about personal courage. Christian comes across as an unwilling hero, yet he still manages to persist in his confrontation with his father, which is both psychologically painful and has shades of mythical and Oedipal significance.

Vlad Massaci’s production, which is Nottara’s UK debut, is performed in Romanian with English surtitles. It is a fine example of ensemble acting, where each actor gets their moment to shine. Alexandru Repan’s Helge is a mountain of a man, a powerful and sinister stage presence, while Ion Grosu’s Christian makes the journey from depression to confrontation seemingly at enormous personal cost. When these men break, the earth seems to tremble. There’s good work also from Dan Bordeianu as the young and passionate Michael and Ada Navrot as the nervy and worried Helene.

As the skeletons come tumbling out of several cupboards, there are one or two funny moments, each laced with an acerbic twist of excruciating emotion. But if the naturalism of the acting makes the show instantly accessible, the main disappointment is that the piece is not presented with more visual imagination. Apart from the ghostly presence of Linda, some spectral animal trophies and a distracting video, the show remains earthbound. It hurts, as it should, but it never really soars.