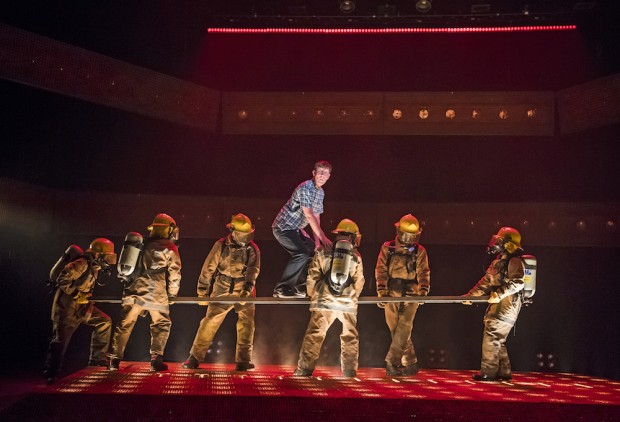 Masculinity, whether toxic or in crisis (but never ever problem-free), is a hardy perennial subject for British new writing, and this new piece from playwright Simon Stephens, Frantic Assembly choreographer Scott Graham and Underworld musician Karl Hyde is a verbatim drama made up of interviews with men, which the trio conducted in their home towns of Stockport, Corby and Kidderminster. The overall theme is fatherhood, men’s relationships with their Dads. Given that this is such well-trodden ground, does Fatherland, which was first seen as part of the Manchester International Festival in 2017, have anything new to say?

Beginning with a preshow dirge-like song which monotonously repeats the questions asked during the interviews — from “What’s the earliest memory you have of your father?” to “Did he ever talk about sex with you?” — the show starts off as theatre about, well, theatre. Actors playing Stephens, Graham and Hyde discuss the project with young volunteer Luke, who asks them about the how and why of the whole thing. Then the testosterone threesome revisit their old industrial roots, where they meet all sorts of men: an opinionated racist, a single father, a young man who never knew his Dad, a man who has experienced mental illness, some rugged workers.

As these men talk, music and movement gradually become part of the show. Repeated phrases have an incantatory effect, with rough choruses growing into collective chants (and the theatre space flooded with a mass of extra singers at the climax). It is visceral, raucous and occasionally very loud. If the words are often unclear, drowned out by the music, it’s easy to get the gist. Over 90 minutes, Fatherland attempts to dig into the soil of masculine identity, although you sometimes feel it could have excavated deeper, and spared us some of the repetitive banalities. Men comes across as solitary and brute. They lack emotional intelligence; they fail to communicate. Sons see their fathers in terms of their work: steel workers, construction workers, firefighters and salesmen. Lonely and insecure, these men are often in pain. And they pass on their pain to their kids.

Stephens, Graham and Hyde are played by actors Nyasha Hatendi, Declan Bennett and Mark Arends, with Luke, played by Craig Stein, acting as their interlocutor. He asks them about how they came to create the play, who they spoke to, and why have they given it the form that it has. Provoked by questions about their authenticity — all three now work in London so what do they really know about the north where they came from? — and about their superficiality — have they really thought through the implications of using a loaded term such as “fatherland” — the three creatives defend themselves. But, significantly, their reasoning is not as convincing as Luke’s scepticism.

In the end, the trio are forced to talk about their own fathers: Stephens remembers his father’s alcoholism, which led to his death at 58; Graham went to football with his Dad, but otherwise the man was a distant figure; Hyde describes various incidents, including a car crash and his father’s pride in his son’s achievements. But, having heard Luke’s repeated questions about the truth of the material, you can’t help but wonder how literally true or profound these stories are. And, given that all of the material reveals so little, wouldn’t a more fictional approach have been smarter? More imaginative? More emotional?

Of course, as you’d expect from Frantic Assembly’s Graham, the show is a mix of physical theatre, punchy writing and throbbing music. Highpoints include a firefighter’s gross story about a decomposing body, which in the context of the Grenfell tragedy takes on a deeper resonance, and the huge chorus of “A lot I’d like to know”. One scene is a bonfire chat, another has a deep heartbeat. The singing is often deliberately hoarse and casual, evoking the loveless families, lonely individuals and sad deaths of the men. A feeling of anger, of potential violence, circles around the show.

Fatherland is full of familiar male bravado, of boasting and preening, and posing and exposing. It has moments of typical male autism. But also some rather cute stories, mainly by the fathers of today. Yet most of the content is almost aggressively banal, sometimes fraught, sometimes frightening, but generally unenlightening. It’s hard to doubt the integrity of the process that produced the show, but it must be admitted that its conclusions are generally already well known. So although the staging has vivid visual episodes, and is entertaining and stylish enough, by the end you might be forgiven for wanting much more substance.