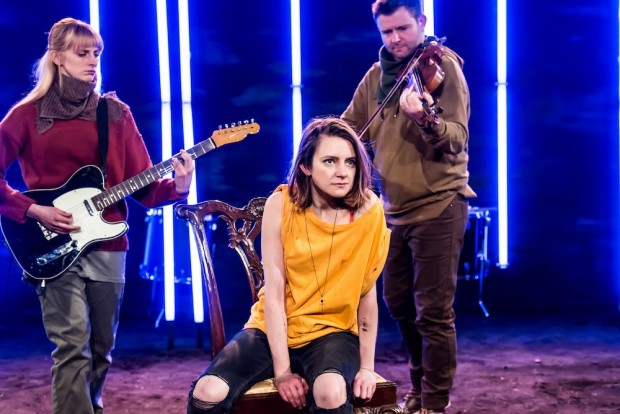 Electra is the protagonist in two Ancient Greek tragedies, one by Sophocles and the other by Euripides. The story is typically bloody: as the daughter of King Agamemnon and his wife Clytemnestra, she wants to revenge the murder of her father by her mother. In her sights are both Clytemnestra and her mother’s new lover, Aegisthus. But unable to do the deed herself, Electra awaits the return of her long-lost brother Orestes, who everyone else says is dead. He isn’t, of course, and when he returns there is much spillage of blood. It is, after all, a revenge tragedy. And the House of Atreus is indeed cursed.

This version, which reimagines the story in a contemporary context, is by DumbWise, a young actor-musician theatre company. Its artistic director, John Ward, says: “Electra is the original, anti-establishment, punk-rock legend, and a story rampant for reimagining in a modern age. Setting the play within a seething revolution electrifies the plot, finding new meanings for a modern audience, as the contradictions of today’s politics collide with the shocking violence and energy of this classic revenge tragedy.”

Set during a revolution which resembles the Arab Spring, with elements of student protest and popular revolt thrown in, Ward’s occasionally rhyming text is an uncomfortable mix of the ancient and the modern. The words combine the Ancient Greek baggage of the original — kings, oracles, gods and fate — with some material about contemporary concerns: Generation X, fake news, spin-doctors and television interviews. There’s some explosive swearing, “spineless bitch”, next to some tragic emoting, next to a touch of the bard: both Electra and Orestes seem to suffer the Hamlet syndrome — they are unable to act without talking, talking, talking. The result: a show that lasts almost three hours. And that’s way too long.

Despite being hyped up as a reimagined version of a Greek classic, this is merely a blend of two plays by Sophocles and Euripides, plus extra contemporary references bolted on. I really do wish that Ward had not taken this middle road of weak adaptation, which feels self-contradictory and all wrong in tone, and had instead gone for a completely contemporary version. You really don’t need all the junk about gods and oracles: the story would work without them. I would have loved to see a version that was completely reinvented in a modern idiom, in the language of today, with no archaisms and no overblown pomposity. As it is the heroic cadences of the main speeches sit awkwardly with the visceral immediacy of the music.

Although the play offers flashes of insight — a depressed population pushed beyond endurance by corrupt rulers and determined to fight back — it does not paint a credible picture of today’s Greece, nor of today’s Britain. Still, there are some enjoyable moments: a great speech about the uprising, with a remix of the 1960s slogan “The revolution will not be televised”, and an angry “We are Generation X” speech. But the politics of the piece are fatally bogged down in the dependence of the story on the actions of the gods and the reliance of the revolution on one hero: Orestes. Bertolt Brecht once said: “Unhappy is the land that needs a hero.” And this hero-led revolt completely overturns the story’s potential politics, making it a fantasy about a heroic toff individual rather than one about the people.

Even worse is the playwriting, being verbose and over-written, self-indulgent and ramblingly repetitive. As each scene drags on, all I could feel was the desire to shout: “Cut, cut, cut — get on with it!” On the other hand, I liked a lot of the punk-rock music, the doom-laden drumming and the lyrical violin. At one moment, there was a brilliant burst of wild gypsy Roman marching music, which was a real thrill. Ward’s directing is too self-regarding, but Samuel Wilde’s simple neon-lit sandy design is evocative enough and David Hewson’s music adds the necessary burst of rapid heartbeats.

I also enjoyed Lydia Larson’s Electra, a spoilt brat who is emotionally overwrought from the start, and Dario Coates’s Orestes, who gradually grows into a vengeful fury. Both energetic youngsters are well matched by Sian Martin’s brooding Clytemnestra, a powerful portrait of female rulership and its spider-like manipulations, while Matt Brewer’s Aegisthus is perfectly slimy and deluded. Megan Leigh Mason and Samuel Martin play some slick licks. But I really do wish there had been less words, more music and sharper storytelling.