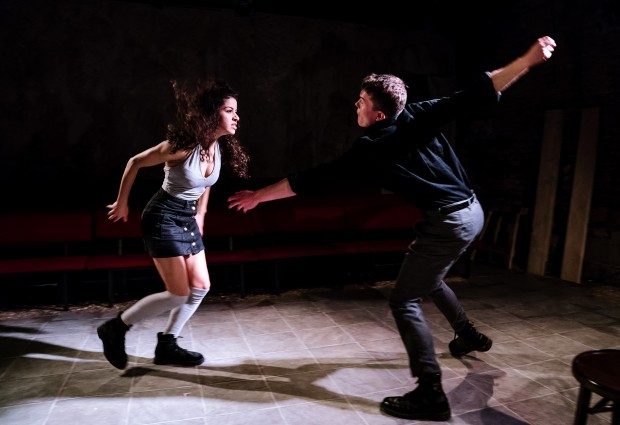 Steven Berkoff is one of British theatre’s savage gods, the creator of a distinctive linguistic style and a thrilling physicality of performance. In the 1970s, his work galvanized fringe theatre before helping to change the mainstream. It gave staid naturalism and flabby social realism a much-needed shot in the arm, and a kick in the balls. His sinewy and beautifully exaggerated entertainments punch you in the face and then tickle you between the toes. His 1975 play, East, is a classic account of life in the East End of London before the great exodus of working class families in the 1970s.

Stomping down Commercial Road come Mike and Les, two working-class bully boys and best mates obsessed with girls and fighting. If they’re not chasing skirt, they’re getting into a scrap. Although the drama is ostensibly the story of Mike, Les and Sylv — a love triangle that explodes in violence — the play is actually a series of vignettes: Mike and Les’s battle over Sylv; Mum and Dad having tea at home; Mike’s meeting with Sylv; Les’s job in a menswear shop; Les’s infatuation with a stunner he sees on the bus; Mike’s motorbike ride; Mum’s complaints about her husband; Mike’s cunt speech and Sylv’s speech of resolution.

In the scene changes, Berkoff specifies some quick bits of mime, a silent film sequence for example, or a scene set in an office. Throughout there are snatches of traditional Cockney tunes, from “My Old Man Says Follow the Van” to “If You Were the Only Girl in the World”. Written with great dollops of cod-Shakespearean wit, East is a garish trip through urban poverty where life is lived in a series of burps, farts and fucks. A lot of the humour comes from the clash between the mock-heroic text and the ghastly realities of sexism and deprivation, vicious violence and right-wing fantasies. Whenever the piece sways in the direction of nostalgia, Berkoff throws in a bucketful of ugliness.

Dad is a racist bigot who remembers Oswald Mosley with fondness and whose account of the Battle of Cable Street links its violence with that of his kids. Mum is a sad and wasted figure whose story about groping a young man in the local fleapit turns into a horrific realization. Rushing through vivid and lurid episodes like a cartoon, the play lulls you with Dad’s conviction that “Years ago things were good”, before battering you with hilarious and gross accounts of what we are meant to recognize as traditional working-class life.

Today, the most moving moments are not the tales of male bravado or moments of masculine loneliness, but Sylv’s longing speech and Mum’s lament. The women have a perceptiveness and realism that has not aged, and their speeches are fresh and to-the-point. If there is a shred of hope in the play, it is articulated by its angry women. As for the men, they are yet another reminder that the white working class has always included an appalling number of rough racists and thugs. In Brexit Britain, their despair and fury have acquired a new significance.

Originally opening at the 1975 Edinburgh Festival, before coming to this pub theatre in London, East is a visceral, experiential and in-yer-face classic. This revival by Jessica Lazar for Atticist is designed by Anna Lewis and proves it has lost none of its rage and rollocking power. The cast is led by James Craze and Jack Condon’s fearsome Mike and Les, with Boadicea Ricketts as a slinky Sylv, with Debra Penny as Mum and Russell Barnett as Dad. Both Condon and Ricketts are making their debut. Carol Arnopp tickles the tinkling ivories. Lazar follows Berkoff’s text closely and her production is highly impactful, if sometimes a bit too exaggerated and messy. Berkoff’s world is wild and ludicrous, his sense of theatre superb, but in the end East is more comic book than political tract.

In Brexit Britain both this play, as well as Andrea Dunbar’s Rita, Sue and Bob Too (currently at the Royal Court), seem strangely prophetic: each seems to announce the fact that an ignored and deprived white working class would one day give Westminster a punch in the eye. And, during the 2016 referendum, that is exactly what happened.