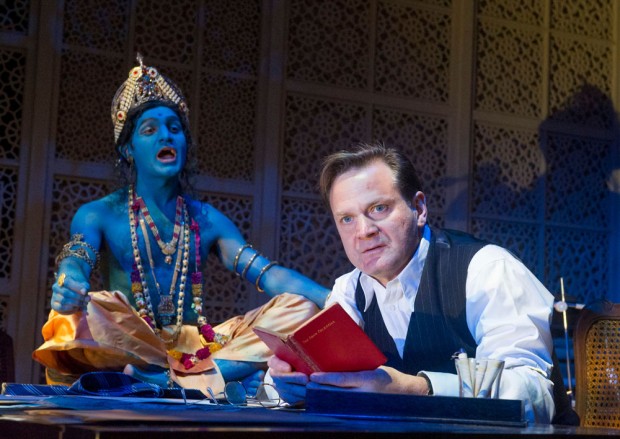 The Partition of India and Pakistan in 1947 is one of those epoch-making events that are so huge as to be almost beyond our comprehension. It affected the lives of literally millions of people. And has a resonance today. To understand this cataclysmic event, you feel, will require six hours of documentary, a two-month mini-series or a novel of at least 600 pages. Yet here is Howard Brenton’s new play, Drawing the Line, which opened tonight, and it tells the story in one quick evening.

Brenton achieves this compression by focusing on a small tale at the heart of the larger epic. While the big names – Gandhi, Nehru, Jinnah, Atlee, the Mountbattens – do take the stage, the main focus of the story is on Cyril Radcliffe. Who? Well, exactly. Radcliffe was the man to whom British prime minister Clement Attlee delegated the task of drawing the boundary line between the newly independent countries of India and Pakistan. Of course, you think, someone had to do it. But was he the right man for the job?

In 1947, when the story begins, Radcliffe is a judge in London. He’s a bit of a pen-pusher and has never been to India. He has no cartographic experience. And he has only five weeks in which to do this politically sensitive job. For while the saintly Gandhi objects to any partition, Nehru and Jinnah are manipulative politicians, each trying to get the best deal for their Hindu and Muslim constituencies. So Radcliffe stumbles into the lion’s den, and gets a bit of a mauling.

With great good humour and a fine eye for the historically telling detail, Brenton shows how Radcliffe starts off as the quintessentially confident Englishman — he has gone to the right schools, had the right jobs and belongs to the right clubs – and ends up suffering a crisis of confidence. And who can blame him? The task of cutting a country in half when the many different faiths live cheek by jowl in the same villages would defeat anyone.

As the deadline approaches, Radcliffe falls ill, getting more and more feverish and desperate. He is plagued by doubt, by squabbling assistants and has very little time for, and less understanding of, the bigger picture. Or even of the local gossip. While Edwina, Lady Mountbatten is having a love affair with Nehru, Radcliffe remains ignorant of her influence, and knows practically nothing of all the other players. Yet on his decisions the fate of millions hangs.

This is a very English play about a very English story. The idealism of the first scenes, with the protagonists convinced of the value of fair play and tolerance, while comparing a massive subcontinent such as India to a cricket field, is typical. As is the fact that all the main players have had a good English education. And although Brenton stresses the fact that fanaticism and spilt blood is stronger than reason and level heads, with the play ending on an amazing coup de théâtre, much of the proceedings are on the level of, as one of the characters puts it, a “Gilbert and Sullivan opera” – or should that read “farce”?

Certainly, director Howard Davies and designer Tom Hatley’s compelling production moves at a cracking pace – and revels in the theatricality of the material. Brenton’s play sketches out history in very broad brushstrokes. Tom Beard’s Radcliffe, at first clearly out of his depth, grows into a typically British unsung hero. Silas Carson, Lucy Black and Andrew Havill lend the Nehru-Mountbatten triangle an old world charm, while Paul Bazely makes Jinnah a thoughtful figure. Other members of a huge cast give the play its epic sweep. But the pleasure of the evening lies less in the performances than in the sheer eccentric craziness of the story.