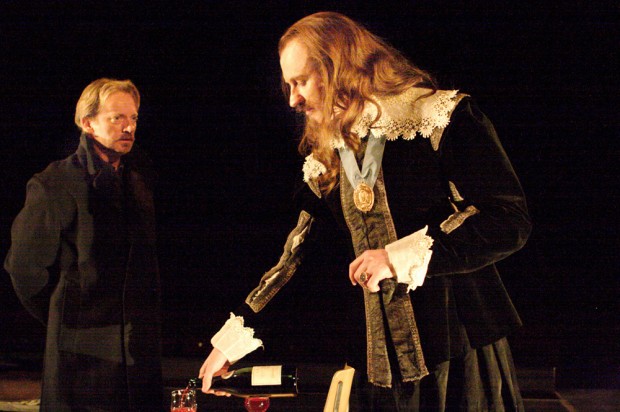 In the past few years, without any fanfare, the veteran playwright and Spooks script-writer Howard Brenton has not only made a comeback, but has also become the chief chronicler of the nation’s past. One year he is telling the story of Harold Macmillan in Never So Good, then he’s doing a version of The Ragged Trousered Philanthropists. He might make a detour to pray with St Paul or to converse with Abelard and Heloise, but then he comes back to English history with the award-winning Anne Boleyn. His latest, which opened tonight, is about the trial of Charles I. And it’s got Douglas Henshall and Mark Gatiss in the cast.

It’s set in December 1648 and January 1649 so you need to do some history revision. Here goes: after Oliver Cromwell (Henshall) and Parliament had defeated King Charles I (Gatiss) in battle, the monarch did a deal with the conservatives in Parliament and they voted not to put him on trial for starting the Civil War. Frustrated by this betrayal, the Army leaders stage what Brenton calls “the first and only military coup in English history” — Pride’s Purge. During the next 55 days, Cromwell — “God’s Englishman” — gradually takes control and Charles is tried and executed.

Brenton’s retelling of this fascinating time is written in the key of complexity. He accurately reflects the complications of the Parliamentary side, from staid General Fairfax and his conservative wife, to the more politically radical but socially traditional Ireton, to the religious fanatic Prynne, the republican Harrison and on to the agitator-in-chief Lilburne, aka Freeborn John. Plus a host of other characters. If these names make you snooze then this is not the play for you. Likewise, Brenton’s idea of both Cromwell and Charles is compellingly complex, teasing out the contradictions in the characters of the two men. When they arrive on stage, the language of the play shines like burnished gold. The playwright even dares to imagine a fictional meeting between them, as they represent two different political types (conviction versus cheating), two views of the world, and the difference between the past (absolute monarch Charles) and the future (Cromwell’s republic leading to a constitutional monarchy).

Like other epic history plays, 55 Days shines with bright ideas, but there are also a few passages of plodding explication. With its echoes of Shakespeare, Schiller and Brecht, this is an exciting and affecting story that explores the often ignored origins of modern Britain. There are many deliberate echoes which are amplified by our current concerns: the obsession with the royal family, the reputation of Parliament, the horror of war. But Brenton also reproduces that quintessentially 17th-century mindset that saw the hand of God in every political act. And the great unspoken point is that yesterday’s Bible bashers are today’s Islamist fanatics.

Through its two main characters, this is also a play about national identity. As Charles, Gatiss is the very image of traditional Englishness, representing Deep England and heritage: supercilious, arrogant, yet sharp as a rapier. He’s the toff of toffs. And the actor is even the spitting image of the king. By contrast, Henshall’s intensely focused Cromwell looks less like the historical character (no visible moles), but he does effectively represent a new Britain being born, a democratic future (however compromised). His God-fearing hesitations — and mix of belief in Divine Providence and political calculation — is very familiar, and both men’s different takes on religion are fascinating to watch.

Howard Davies’s production, designed by Ashley Martin-Davis, underlines the resonance of the English Revolution by dressing Charles in 17th-century clothes and all the rest of the cast in gear from the second world war, another era bursting with revolutionary effects. As well as excellent work from Gatiss and Henshall, especially in the amazing trial scenes, Daniel Flynn stands out as Ireton, Simon Kunz as Fairfax and Gerald Kyd as Lilburne. With music based on Purcell, and a traverse staging, this is a play not only about the historical past but also about who we have become since.

This review first appeared on The Arts Desk, 24 October 2012