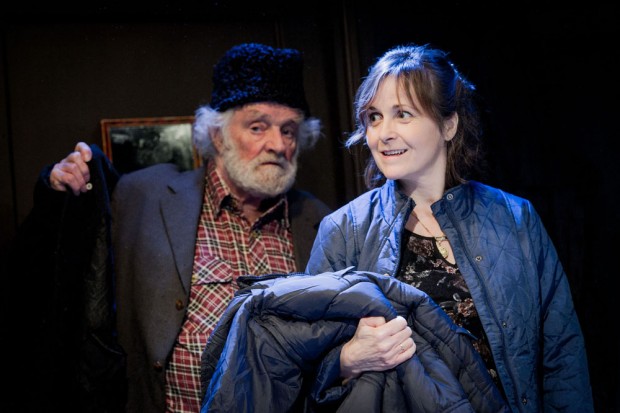 Can a country like Russia escape its history? In Moses Raine’s new play — transferring to the West End from the tiny Old Red Lion pub theatre where it was first seen in May 2014 — the answer seems to be no. Like Tena Stivicic’s 3 Winters at the National, the drama tells the story of a nation through the close study of three generations under one roof, in this case a small flat in contemporary Moscow. As you’d expect, each age cohort is shaped by its political, social and cultural experiences.

So here goes: the grandad Alexander is a survivor of Stalinist communism. He starved and ate a leather belt during the siege of Leningrad in the second world war, and survived the oppressive postwar regime. But at what cost: one of his sons, Kolya, was arrested by the Soviet state and disappeared; the other, Ivan, now works as a bureaucrat and enjoys some of the freedoms of the post-communist era. His wife, Zhenya, is less happy. She has a nervous habit of sniffing all the time.

But perhaps it is their children — 24-year-old daughter Sasha, who bemoans her own intractable “donkey heart”, 18-year-old son Petya and even the 10-year-old boy Kolya — who are the most frustrated. In a society that promises to be a capitalist paradise, how can they accept the fact that not everything is rosy? Adding to the family tensions are three outsiders: Clara, Petya’s petulant girlfriend; Tom, the twentysomething English visitor, who is in love with Sasha; and Ivan’s employee Natalia, who comes to stay because her rent has shot up and she can’t afford to live where she was.

What Raine captures so well is the distinct otherness of a faraway culture: different ways of feeling; different ways of talking about emotions; different views of how to behave. There are lots of serious faces, and a general air of melancholy. Yet, despite their foreign feel, the dialogues are brilliantly colloquial, acutely observed and often very funny. All the details of ordinary everyday life — from drying washed trousers with a tiny hair dryer to the lack of digital devices — are carefully introduced. Petya is about to be called up for military service, which might involve him being sent to the Ukraine front, but can bribe a doctor to get an exemption.

What gives the play a distinctive character is its intelligent blend of quotidian detail and political metaphor. When the family find out that Ivan is having an affair, they spy on him — which echoes the surveillance of the Soviet era. In the cramped, overcrowded flat, the atmosphere remains similar to that of the bad old days. Absolutist attitudes prevail; mutual distrust poisons the air; there is a cloud of oppression.

Nina Raine directs her brother’s play with a fine mix of tenderness and emotional truth: whenever any of the characters hide their feelings behind sentimentality she undercuts this with a sharp slap of reality. She is well served by an excellent cast led by Amanda Root as Zhenya and Paul Wyett as Ivan, and there is much to savour in the performances of Patrick Godfrey (Alexander), Emily Bruni (Natalia), Lisa Diveney (Sasha), Alex Large (Tom) and James Musgrave (Petya). Both naturalistic and symbolic, Donkey Heart — with its memorable depiction of how the dead hand of history weighs on the young generation — is a great start to the new writing year.