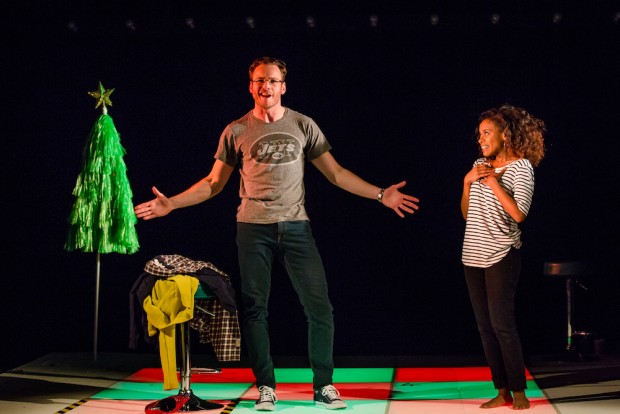 As the only inhabitant of Planet Earth who wasn’t knocked completely senseless by La La Land, it does occur to me that I might not be the most sympathetic reviewer of a rom-com. Still, I’m willing to give it a try. So here goes: written and originally performed by Richard Marsh and Katie Bonna, Dirty Great Love Story is a 95-minute romp that tells a story about how boy-meets-girl, boy-shags-girl, girl-leaves-boy, boy-keeps-bumping-into-girl and — after two years — girl-realizes-she-loves-boy. It sounds charmless, but actually its chief virtue is its bright LOL and drink-fuelled charm.

The thirtysomething characters are called Richard and Katie (named after their creators), and they meet at a dance club while he is on stag do and she is on a hen night. After an awkward, drunken one-night stand, they keep meeting because they have friends in common: Richard’s best mate, the Northern Westy, falls for CC, the posh friend of Katie’s. Cue a barbeque, a wedding and a christening. Meanwhile, Katie meets Matt Priest, an Eton-educated prick, and it looks like Richard is fated to remain single for the rest of his little life. But, surprise, surprise, Cupid is busy flexing his bow and when he looses his arrow, the sky lights up with fireworks. It really is a sweet tale.

The characters are instantly familiar: Richard is a bit gauche, a bit geeky, a bit immature; Katie is sassy, strong-minded, but still obsessed with You Know Who, an ex who treated her badly. There’s something a bit stereotypical about the idea of a man who can’t really express himself and a woman who doesn’t really know what she wants, but there are enough moments of raw truth — at one point he tells her frankly to get over her ex — to impress as well as amuse. It’s a typical two-handed rom-com in which performers Felix Scott and Ayesha Antoine play all the characters, making knowing winks to the audience and generally being totally lovable.

The writing shines, with Richard talking in rhyme and both characters displaying a hectic love for poetic imagery, sometimes jokey (he is the “knight in shining glasses”), sometimes a touch clunky (“Katie’s put new glasses on my heart”). It’s all very heightened and artificial so if you like that kind of thing you’ll be in heaven. At times, the writing is as tangy as a whiff of sick on morning breath, and often as insubstantial as a paper brolly floating in a cocktail. The dirty details often involve drinking, screwing and vomiting, not necessarily in that order. It’s high octane and high maintenance, and frankly, after a while, a bit wearying.

For a show that started as a 10-minute poetry duet by Marsh and Bonna, its arrival in the West End after conquering Edinburgh, the Vault Fest and dates around the country is a real achievement. Smartly directed by Pia Furtado, Antoine and Scott are quick on their feet and nimble with the words. They switch smoothly between the characters and from dialogue to monologue to direct address. The design, by Camilla Clarke, works well as the action bounces from scene to scene. It all makes for a lively and funny evening, but don’t expect to be emotionally engaged or amazed by the show’s content. Its heart is warm, its wit amusing, but that’s about it. It’s fun, but — for me at least — the earth didn’t move.