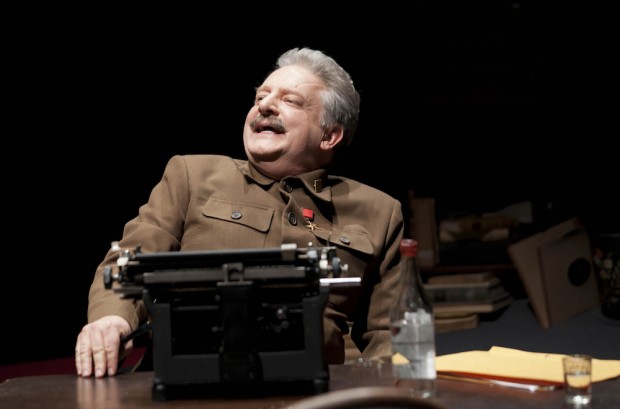 Stalinism is no laughing matter, but — as John Hodge’s new comedy, Collaborators, abundantly proves — a light touch reveals the horror of tyranny more effectively than a heavy hand. In this entertainment, film-maker Danny Boyle’s favourite scriptwriter (Hodge worked on Shallow Grave, Trainspotting and A Life Less Ordinary) gets a welcome helping hand from a great cast, led by Simon Russell Beale and Alex Jennings.

Set in Moscow in 1938, this surreal story begins with writer Mikhail Bulgakov (The Master and Margarita) waking from a nightmare: in his dream he is pursued by a demonic Stalin. You can see why. Bulgakov has been blacklisted by cultural commissars, and his plays are unperformed, yet paradoxically his 1926 drama The White Guard is one of the despotic General Secretary’s favourite plays.

In order to get back into favour, Bulgakov agrees to write a play about the young revolutionary Stalin, part of the celebrations of his beloved leader’s 60th birthday. Hodge’s wonderful masterstroke is to show the two men collaborating, but swapping roles, with Stalin writing the play while Bulgakov makes a series of political decisions that result in the Great Terror. This stage metaphor clearly reveals the symbiosis between culture and politics in the Soviet Union.

Hodge also seems to be saying that, when the system is mad, everything you do merely adds to the madness: there is no right way to behave. The dictator emerges as a plodding playwright while the brilliant penman is an administrator unable to control the consequences of his actions. Then Hodge fills out the picture by showing that under state socialism every aspect of life was ruled by arbitrary fantasy. So, depending on whether you are in or out, your doctor will pronounce you sick or well. Writers who are in get all their work praised; those who are not are persecuted no matter what they do. Industrial production obeys the rules of fictional targets and even more fictional achievements. And this politicisation of all aspects of life leads inevitably to more uncontrollable terror.

As in our own very different times, personal integrity is always at stake when the rewards of success glitter like diamonds in a pile of ordure. Hodge not only shows the mutual dependence of power and dissidence, but also how this awkward embrace effects the artist’s wife and his friends. They are also in the firing line. And those who cannot secure patronage are doomed. These are big questions, and heavy political themes, but here they are lightly and humorously sketched out, as Hodge echoes the style of Bulgakov’s surreal stories.

Some passages are a bit clunky, but Collaborators — from its punning title to its tilted Constructivist set designed by Bob Crowley — is a joy from nightmarish start to tragic finish. Nicholas Hytner’s fast-moving and fluid production adds a tinge of farce and he is very well served by his star cast: Simon Russell Beale as Stalin (able to switch from joviality to menace in a nano second) and Alex Jennings as Bulgakov (able to turn from silky careerist to horrified liberal in an instant). With Jacqueline Defferary as Bulgakov’s wife and Mark Addy as the NKVD cultural officer, this is a very entertaining and surreal evening which reminds us that, not so very long ago, dictatorship in the name of socialism was able not only to brutalise its population, but also to distort the very nature of reality.