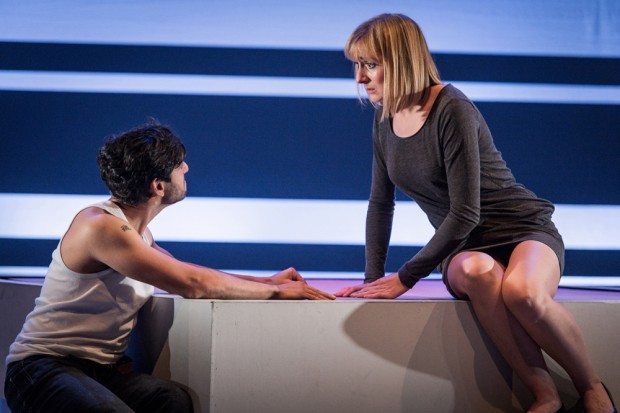 Unlike television, with its series of Spooks and Homeland, theatre has more or less ignored the secret services. For reasons of snobbery (thrillers are somehow beneath the interest of young playwrights) or maybe because of playwriting clichés (write what you know is difficult in the secret world, where no one really knows what’s going on), this is a relatively unexplored area. But in the era of Wiki-leaks and Edward Snowden, surely few subjects could be more timely?

The story of Ciphers begins with a dead body. Justine, employed by the secret services, is found lifeless, having apparently committed suicide. Her sister, Kerry, sets out to find out who killed her, but she soon realises that she’s stepped into a hall of mirrors. Her quest takes her to meet Sunita, Justine’s boss, and she also finds herself getting close to Kai, the artist she works for, and his high-powered wife Anoushka. At the same time, in a series of flashbacks, we see Justine doing her job: listening to intercepted phone calls, running a young Muslim agent called Kareem, meeting a Russian diplomat called Koplov. Through her sister, she also bumps into Kai and Anoushka. What makes all this intriguingly theatrical is that, in the talented Blanche McIntyre’s engrossing production, the same actors plays both Justine and Kerry, Kai and Kareem, Sunita and Anoushka. In every scene, we have to rapidly work out which time zone we’re in, and who these people really are — it’s a bit like being a secret agent.

Ciphers also glows with a powerful metaphoric resonance. If the secret services are staffed by people who must lie for a living, then how can we know who they really are — as people? Are they ciphers themselves? In this way, playwright Dawn King explores the idea of the secret services as a kind of metaphor for personal secrets, the unknowability of human beings, and individual identity. Having a secret life means you have to be plain, but somehow that also makes you attractive.

Likewise, King scratches away at some ideas about how much we really know about those who are close to us. Are some people more attracted to mysterious strangers? How does this affect your capacity to enjoy intimacy? And how far can some people go in their quest for information? However, King’s text is televisually plain. Like James Perkins’s sliding screen set, it remains functional throughout and, although always effective, it never feels very personal. There is no grit in this oyster.

McIntyre’s production — a collaboration with Out of Joint and Exeter Northcott Theatre, where the production premiered last autumn — of King’s pleasurably tricksy text is well organised, and makes good use of projected translations of dialogue in foreign languages. The cast — Gráinne Keenan (Justine/Kerry), Ronny Jhutti (Kai/Kareem), Shereen Martin (Sunita/Anoushka) and Bruce Alexander (Koplov) — works hard and serves the story well. If the final revelation is a bit disappointing, perhaps because a sense of mystery is more beguiling than brute explicitness, this is still an enjoyable evening.