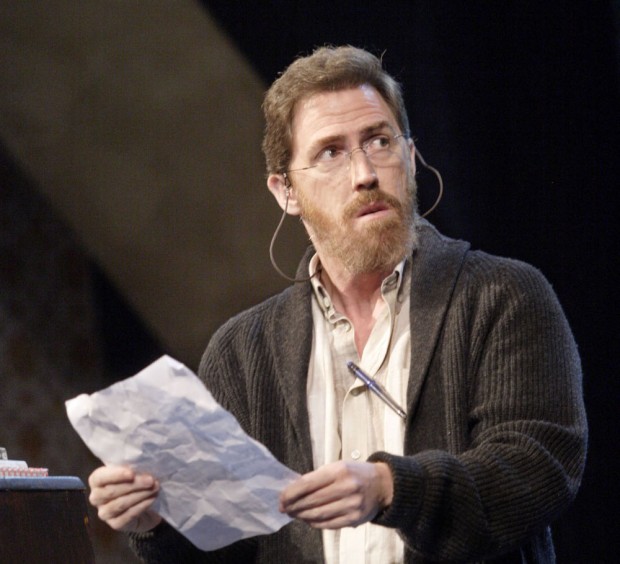 The West End seems to be recession-proof, with rising profits, rising ticket prices and few empty theatres. But is this because commercial theatre is becoming increasingly formulaic? How about this for a recipe: take a tried and tested play by a national treasure, cast it with a celebrity or two and make sure that the evening is no great strain on the audience. Yes, that might work. But is this the case with this current revival of Ayckbourn’s thesp-fest?

At first sight, perhaps. It stars EastEnders’s Nigel Harman plus the super-personable Rob Brydon and has a solid supporting cast, while the humorous tale of an amateur operatic group that stages The Beggar’s Opera as Harman’s character sexes his way through the women in the company seems like a dead cert. But wait a minute, it is directed by Trevor Nunn and 100 tickets are being offered for every show at £10 so it can’t just be a cash-cow, can it?

Okay, Ayckbourn’s 1984 play, his first to win an Olivier award, is based on a good idea. With typical ingenuity, he matches the plot of John Gay’s 1728 Beggar’s Opera with the story of Guy, a lonely widower who joins the Pendon Amateur Light Operatic Society. He is a sad character, an office jobsworth and emotional illiterate. A classic Ayckbourn naif, Guy causes chaos because of his innocence, his awkwardness, his lack of insight. So Guy finds himself having love affairs with Hannah, the wife of Dafydd, the show’s director, and Fay, a married swinger. He is a nice, but witless individual that eventually inspires hatred because no one can believe he is as innocent as he seems. No one could be that naive, could they? Since he works for a multinational company, everyone thinks that he knows about a rumoured land deal, when actually ignorance is his fallback position. Attempts to bribe him come to nought.

And he turns into an unexpected success: although he starts off by being cast in a bit-part role, Guy ends up by playing Macheath, the lead, yet his simple-mindedness results in everyone turning their backs on him. As you’d expect, this is a recognisably Ayckbournean mix of laughter and dark shadows. But in Nunn’s production the emphasis is on entertainment and the am-dram scenes are simple parodies of this world, the theatre in-jokes are neatly delivered and Ayckbourn’s point about the way art both reflects and conceals the emotions of its creators is well made.

But for an Ayckbourn play to really work, you need to feel that, even as you laugh, your heart is breaking. Here, this feeling is missing. It’s an evening that is very low on goosebumps. Nigel Harman’s Guy, the “all-purpose replacement”, is like a blank sheet of paper, and I couldn’t really sympathise with him despite the excruciating situations he is plunged into. Nor did either Ashley Jensen nor Daisy Beaumont, who play Hannah and Fay, touch anything deeper than a passing spasm of interest.

Rob Brydon, the show’s main star, is much better than the rest, and projects a fully rounded character whose mixture of enthusiasm and frustration comes across clearly. His Dafydd has an ego so enormous that it often bursts right out of his already bulky cardigan. You can feel his character’s charisma being dented by the difficulties of working with a bunch of amateurs. Most of the supporting cast, from Georgia Brown’s gutsy stage manager to Barrie Rutter’s Yorkshire big mouth, are vividly drawn. Yet as a whole the production never rises above the level of standard West End fare. It is so unexciting.