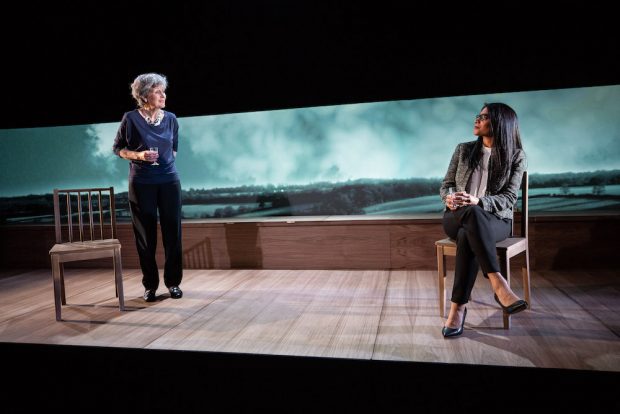 Although the current government has blundered through both Brexit and the pandemic, and is now deliberately making life more difficult for both low-income families and the rest of us, theatre seems to be strangely silent about its response. Where are the angry plays about the Tories? Where are the enraged and engaged playwrights? Nowhere to be seen. Silence. So it is that Tim Walker, theatre critic and excoriating twitter commentator on the stupidness of Boris Johnson’s administration, has stepped up with this documentary, his playwriting debut, about the battles between businesswoman Gina Miller and Prime Minister Theresa May over the issue of Brexit.

Taking his title from veteran Tory MP Kenneth Clarke’s condescendingly sexist description of May while she was Home Secretary and not yet PM, Walker tells the story of how Miller took the government to court over May’s plan to trigger Article 50 of the Treaty on European Union, which states that “Any Member State may decide to withdraw from the Union in accordance with its own constitutional requirements”, without parliamentary approval after the country voted for Brexit in 2016. So while Miller reluctantly, and at great personal cost as death threats and hysteria mount, decides to contest May’s attempt to circumvent parliament, her motives come under scrutiny — is she the hero of the Remainers, or just out to get personal glory? Is she courageous, or just plain stubborn?

On the personal side, Miller talks to her husband Alan — who tries to use jokes to lighten the mood of his ever-so-serious spouse — while May confides in two fictional civil servants, Sir Hugh Rosen — a senior Brexit adviser — and his bright young aide Max Guilden. At the same time, the tabloid press is represented by foul-mouthed Paul Dacre of the Daily Mail, who sees himself as a cheer leader for the Leave camp, as well as Minion, a cockney journalist who has a penchant for rhyming slang. As the mechanics of power — who knows who and who listens to whom — are shown in action, the smaller fry are ridiculed as well as the major players, especially the Tories.

Covering some five years in 90 minutes, Walker’s narrative has clarity and a fast pace. Although there is no much space for complexity, there are plenty of moments that resonate today. Jokes about May’s new curtains — “They’re John Lewis” — and Miller’s remark that “if those who govern us don’t stick to the rules, no one will”, evoke the corruption of the Johnson era and the current scandal of partygate. Although Johnson’s name is never spoken, he is simply referred to as the Foreign Secretary — he who must not be named in May’s earshot. At the same time, as suggested by the title, Walker is adept at showing how women in public life face misogynistic barriers and everyday sexism.

Walker implies that both Miller, who is a personal friend of his and gets the political and moral high ground here, and May have have quite a lot in common despite their opposing views. They are both workaholics, both daddy’s girls (Miller’s father was attorney-general of British Guyana, and May’s a C of E vicar) and a well cultivated sense of morality. These two have principles and a firm ethical footing. They are both equally determined. By contrast, Johnson is fittingly described as “an utter charlatan”. In fact, the most direct moments are when May and Miller have individual monologues which comment on the sheer effort required to be a successful woman: May mentions David Cameron, a “conceited shallow man”, saying, “If a man messes up, he can shrug his shoulders, hum a little tune and walk away”. And Miller dryly comments: “If a woman takes a stand, she’s hysterical.”

Walker is at his best when portraying British public life as a group of boys’ clubs, in which women tend to be accessories, and all of whom are caught in a political torrent that carries everyone along. Everything is done in the glare of publicity, and every opinion is heightened by social media. If these are the pluses, there are also some minuses: Walker is great at writing commentary, but his dialogues feel stilted and awkward. It’s neither as funny as Yes, Minister, nor as dazzling as The West Wing. Much of the plotting is clumsy and the opinions are articulated in an obvious and unsubtle way. Having missed the first staging of this play, I watched its streamed version, which tends to bring out the piece’s static quality (there is little actual drama).

Stephen Unwin’s well-controlled and simple staging, designed by Nicky Shaw, features some good performances by Jessica Turner and Amara Karan as May and Miller, and Andrew Woodall as the revolting Dacre is an enjoyable vision of pure reptilian gusto. Turner brings out May’s awkwardness and the strain of delivering a Brexit she didn’t really believe in, while Karan is by contrast full of warmth and conviction. These two have monologues which help to deepen their characters. They are ably supported by Edmund Kingsley (Alan) and Graham Seed (Rosen). Calum Finlay plays both Minion and Guilden. This is an informative docudrama which reminds us that the only way to protect democracy is to call politicians to account. As May concludes: “If standing up for what you believe to be right is being ‘bloody difficult’, then so be it.” Amen to that.