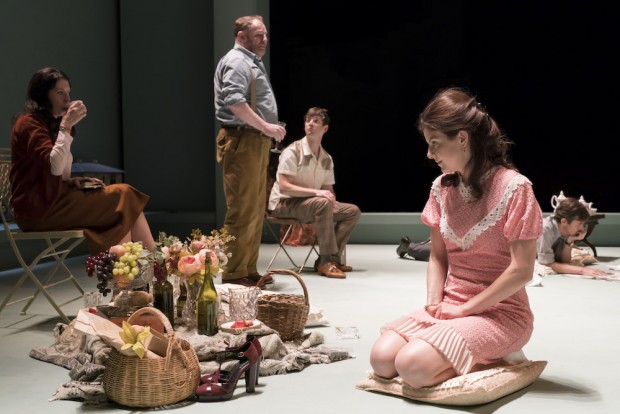 Chekhovian is a rather over-used word when it comes to describing some of the late Brian Friel’s best work, but you can see why it might apply to Aristocrats, his 1979 play which premiered at the Abbey Theatre in Dublin before becoming a contemporary classic. It’s easy to count off the elements that remind you of the Russia master: decaying estates, feckless toffs, wistful longings, unrequited love and missed opportunities. Aristocrats is now revived by Lyndsey Turner, whose previous Friel re-stagings at the Donmar — Faith Healer and Philadelphia, Here I Come! — have all been very successful. And she has already shown her empathy for both the Irish playwright and for Russian culture with her version of his reworking of Turgenev’s Fathers and Sons.

In Aristocrats Friel offers a portrait of the O’Donnells, a decayed family who were once important Irish Catholic nobles in Donegal. Yet they could never be part of the country’s ruling elite because they weren’t Protestants, and never really part of the local community because of their class. This double alienation is written into their family history, which is one of isolation. Now, in the mid-1970s, with the imminent death of their Lear-like patriarch, this long line of well-born local judges and lawyers is coming to an end. Set in Ballybeg Hall, which overlooks the village of Ballybeg (the Friel-land of the playwright’s other work), the story concerns the dying man’s grown-up children.

The unmarried Judith, who has remained at home while her siblings Anna, Alice and Casimir have left, attends her father’s deathbed while making preparations for the marriage of the younger stay-at-home Claire, who is a manic depressive, to a much older man. Brother Casimir, now returned for the first time in 11 years from Hamburg, is full of memories of the family’s history, while his tape recordings include a comically unseasonal message from Anna, who works as a nun in Zambia. Other present family members include old Uncle George and Eamon (married to Alice, who has a drink problem). Observing and recording their awkward interactions is Tom, an American academic, and local handyman Willie.

Friel creates a powerful image of a brutally patriarchal father, who despite his strokes and dementia still manages to dominate his children by means of a baby monitor. Casimir, his only son, has been very damaged, and has turned into a “peculiar” eccentric, a failure and a fantasist. With an absent mother, who may have been driven to suicide by her autocratic husband, the daughters try, with various degrees of desperation, to keep things together. As various fantasies of home clash with historical reality, perceived and expressed by Tom, the idea of home as a safe place in one’s memory, especially after one has left it, is strongly articulated. And, of course, this family is a metaphor for the Irish nation.

Just as 1970s Ireland was affected by the Troubles so the play contains pointed mentions of what is happening in Northern Ireland, with brief snippets, such as the fact that Judith once participated in the Battle of Bogside, offering a contrast between past activism and current stasis. Given that the Big House in this play belongs to an ancient Catholic family in a country where 95% of these properties were inhabited by Anglo-Irish Protestants, you can see that the piece is pretty much an elegy for a forgotten class. At the same time, the inability of all of the family members to cast off the past, which haunts them rather like a childhood psychological trauma, says something about the way that, before the 1990s Celtic Tiger years, many perceived Ireland as a country that was stuck in the gloom of history, its inhabitants migrating for dear life.

Director Lyndsey Turner is clearly impatient with the tradition of playing this melancholy drama as a tribute to Chekhov, and her production is thoroughly anti-naturalistic, as is Es Devlin’s bare, sunken and pastel-coloured set. So Friel’s printed stage directions are read out at the start of each of the three acts, a model doll’s house stands in for realistic staging (honey, I shrunk the set) and the blank wallpaper of the background is gently ripped away to reveal a fresco which symbolically depicts the split family, while simultaneously being a pastiche of European art (with the figure of Caspar Friedrich’s Wanderer Above a Sea of Fog alluding both to Casimir’s travels and to the family’s current situation). However, when this fresco is finally revealed after the interval, its imagery sadly adds little to what we already understand about the play.

Although Turner integrates Chopin’s music neatly into the action, the use of the doll’s house furniture to illustrate Casimir’s false memories of the various celebrities that the family have known — Gerard Manley Hopkins, GK Chesterton, Daniel O’Connell and even WB Yeats — tends to make the episode comic rather than tragic, which rather skews the sense of the play. Likewise, the pristine bare staging suggests a modern Scandinavian feel to the family home, when in fact its key atmosphere should be one of decay. And, despite the freshness of her approach, a kind of pensive minimalism, Turner’s cast never really master the delicate music of Friel’s text, and the performances are uneven.

Perhaps the most energetic and entertaining presence is that of David Dawson’s eccentric Casimir, whose gawky and rather fey delivery is frequently both amusing and just a touch tragic in his expression of his character’s illusions. Although she has relatively few speeches, Eileen Walsh impresses with her well-grounded sincerity and fragility as Judith, while Aisling Loftus (Claire) and Elaine Cassidy (Alice) are different enough to suggest a dysfunctional family. Emmet Kirwan’s Eamon is less gripping than David Ganly’s Willie, while Paul Higgins’s American accent seems to fade in and out as if in imitation of the baby monitor. In the end, Turner’s anti-naturalistic approach results in an oddly unemotional, disjointed and not entirely satisfying production.