Another World: Losing Our Children to Islamic State, National Theatre 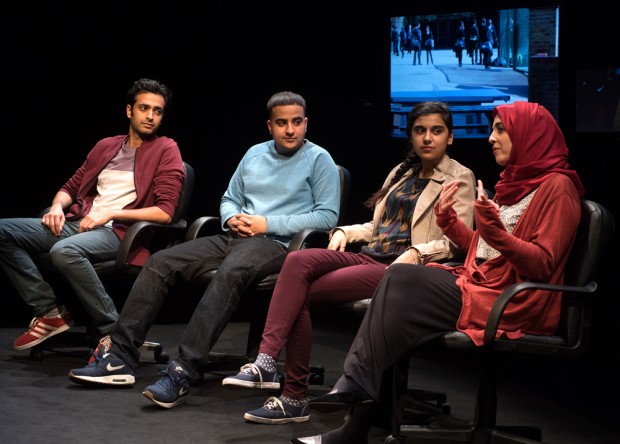 Why do young British Muslims go to join the so-called Islamic State? Since the entire media has been grappling with this question for ages now, it is a bit puzzling to see our flagship National Theatre giving the subject an airing, especially as this is a verbatim drama, which uses the actual words of interviewees, and is thus not so very different from ordinary journalism. But if Gillian Slovo’s Another World: Losing Our Children to Islamic State aspires to be a stage piece, how well does it work?

The 95-minute show begins with examples of IS propaganda, a few glimpses of the kind of stuff that, as one of the schoolboy interviewees later remarks, could get you arrested if you searched for it online. Yes, we are living in an age of anxiety. Then the chanting increases on the soundtrack, while Abu Bakr al-Baghdadi of IS explains the idea of the Caliphate, while Zarlasht Halaimzai, an education advisor, explores the origins of the notion of armed jihad deep in the Cold War battle of Afghanis against their Soviet invaders. So far, so okay.

Then the scene switches to a social centre in Molenbeek, Brussels, where three mothers — Geraldine, Yasmin and Samira — describe how from their families two young sons and one daughter left their homes and travelled to Syria. These are sad little tales. They are typical of our times, and will be a revelation to no one who has followed the news, but what the play succeeds in doing is portraying the raw emotion of the mothers. At one point, when one of mothers falters, a cast member hands her a glass of water — it’s a gesture that feels real, not stagey. At the same time, the interviews with the mothers are deeply frustrating: their kids are blameless; they are victims; no one takes responsibility for what has happened — it’s always someone else’s fault.

And that in miniature is the problem with the whole show. All we get is testimony, from Muslims, including famous names such as Moazzam Begg; figures of authority such as military men, security experts and top cops; even some sixth-form students from Tower Hamlets in East London. But their accounts are never questioned. No one interrogates anyone, and no one asks why some Islamists become violent killers. There’s a real failure of the liberal imagination in this play: so while the usual reasons for young people going to Syria get an adequate airing (identity crisis, unemployment and racism), there is no sense of intellectual struggle, no questioning of clichés, no conflict. In fact, this is not a drama at all; it’s a piece of rather lame journalism.

And the gaps are so obvious. Wouldn’t it be fascinating to see two religious-minded Muslims arguing over IS, and about armed jihad? Or to see the family conflicts that led to young men and women going to Syria dramatised in front of our eyes? Wouldn’t this help us learn so much more about the sitution? As it is, the show fails to come up with any new metaphor, or symbolic moment, that might help in our understanding. Surely art is meant to wake up our inner irrational being? Instead, and this might be typical of both verbatim theatre and of our Reality TV culture, all we get is raw emotion. People tell us what they feel. But deep feeling is not enough. Shiraz Mahar, now a research fellow in radicalisation, describes his feelings of joy when he saw the results of the 9/11 attacks. I would have liked to think that his testimony was contested, but in this play it isn’t.

Nicolas Kent, who has an amazing track record as former artistic director of the Tricycle Theatre and is credited with the original idea, directs the show, and has clearly worked closely with Slovo. But this kind of verbatim theatre looks really boring on stage, and the only props are some office chairs. And there is a real limit to how interesting a handful of seats and a handful of people, many of whom are dressed in suits, can be. However much you shuffle them around. Still, the large hardworking cast perform their parts with integrity, and I particularly liked Nathalie Armin (Yasmin), Penny Layden (Geraldine) and Sirine Saba (Samira); Phaldut Sharma (Begg); Gary Pillai (Shiraz Mahir) and Tim Woodward (Reverend Paul Fitzpatrick). While it’s good to counterpose interviews with real people to some of the nonsensical hysteria in the mainstream press, the lack of drama and argument means that Another World remains theatrically inert. And a missed opportunity.