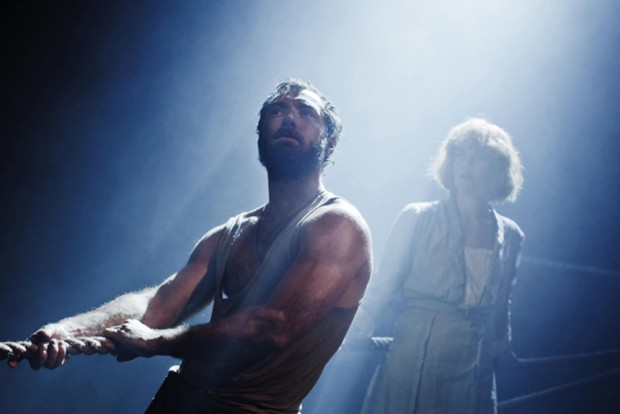 The talented Mr Jude Law is back on stage in what must be the hottest ticket in the West End. Although not everyone warmed to his 2009 Hamlet, the mere presence in central London of one of Hollywood’s most bankable stars is enough to bring a touch of sunshine to a wintry summer. My main anxiety was that, as a reaction to the riots sweeping the capital, the Government would call a curfew and close the show, which was due to open tonight. I needn’t have worried. It opened on schedule.

And Law doesn’t disappoint. He has a real talent to surprise: here, he inhabits the bearded, brawny body of Mat Burke, an Irish seagoing stoker whose gift of the gab goes hand in fist with his brawling masculinity. Hauling himself on stage, half-drowned from a shipwreck, you can almost smell the brine steaming off his muscular physique. Soon, he is bewitched by Anna Christie (Ruth Wilson), who he sees as a blonde bombshell. Law’s acting has a mesmerising bravura; he grabs the audience by the lapels with his tales of the sea, all flashing eyes and sheer sexual energy.

Typically, Eugene O’Neill’s 1921 play — which won a Pulitzer Prize in 1922 — makes you wait for Mat’s entrance. Before he arrives, the playwright sketches out the story. Anna is the 20-year-old daughter of Chris Christopherson, a Swedish captain of a barge who, 15 years before, abandoned his daughter to sail the high seas. Their embarrassed reunion in a squalid drinking hole opens the story. When they move to Old Chris’s barge, neatly designed by Paul Wills, Mat and Anna’s love begins to smoulder, and it becomes clear that all three characters are badly damaged individuals. So before Anna can accept Mat fully, she must tell him about her past.

Brought up by cousins on a Minnesota farm, Anna was abused as a teenager, left her home and spent a couple of years working as a prostitute. When she tells both the men in her life about this, their reactions are predictably primitive. Likewise, Old Chris and Mat struggle for possession of Anna’s affections. In this sharply outlined psychological triangle, the sea is ever present as a heaving metaphor for elemental nature, heroic adventurousness and tumultuous desire. One of the triumphs of Rob Ashford’s deeply felt production is the way he suggests the proximity of the sea — at times, you hear its terrible roar, feel its spray and taste its salt.

This is a moody production, with sudden shifts of light and shafts of colour. It is also brilliantly acted. Unforgettably, Law is utterly convincing. When he bellows for God, the only surprise is that the deity doesn’t immediately answer. When he curses Anna, you fully expect her to drop. And Wilson is a perfect foil for Law. Sometimes sultry, sometimes sassy, always sympathetic, her characteristic crooked smile can denote wonder as much as emotional vulnerability. She perfectly captures Anna’s sense of independence as well as her agony. As Old Chris, David Hayman comes across as a nimble old soak who lights up when he talks about the sea.

Normally, I’m sceptical about hot tickets, hyped-up shows and forgotten classics. But these high-definition performances, blended so vividly within a beautifully atmospheric experience, left me weak in my seat. Usually, at the end of a show, I like to rush home and write my review. This time, I left the theatre grudgingly, unwilling to quit the place where I’d seen such vivid and powerful images: Law’s water-drenched entrance, his picking up Old Chris and carrying him across the room, his defiance as Wilson pokes a gun at his chest.

Like most of O’Neill’s work, the language of the play has a reiterative insistence, a tub-thumping energy that captivates both cast and audience. As an excavator of deep emotion and explorer of the workings of the human heart, he is peerless. This time, there is also a gentle shower of redemption that sweeps across the stage in the final scene: what is uniquely searing is the playwright’s characteristic understanding of psychological damage and what is so touching is the idea of forgiveness — even if the person being forgiven is blameless. This Anna Christie is a really superb revival.