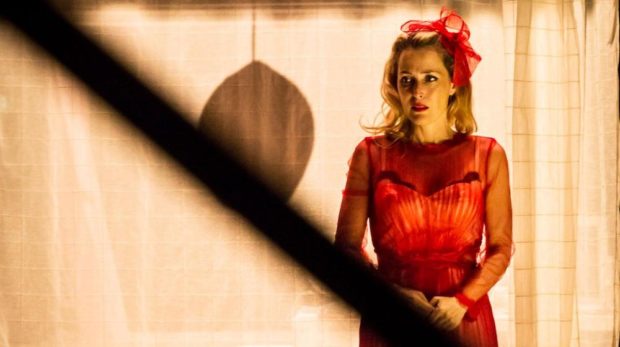 The National Theatre’s triumphant march through its archive of NT Live recordings continues this week with a glorious blaze of a show. Starring Gillian Anderson, Ben Foster and Vanessa Kirby, this 2014 revival of Tennessee Williams’s 1947 modern classic A Streetcar Named Desire was a Young Vic production, and its film version is currently presented by National Theatre at Home. Anderson had wanted to play the central role of Blanche DuBois for decades, she says, ever since at the age of 16 she learned one of the character’s monologues for a competition. So the character has been in her DNA for years — and it shows. Especially when she turns up the heat. Her performance is a scorcher.

Set in the French Quarter of New Orleans, the story shows what happens when the apparently respectable former English teacher Blanche visits her sister, Stella, who is married to Stanley Kowalski, a working-class mechanic. Blanche’s fragile psychological state, which she blames on the strains of teaching and the loss of the family’s Mississippi plantation home, deteriorates in an environment which she finds degradingly poverty-stricken. In her loneliness she begins to get involved with Mitch, one of Stanley’s friends. At the same time, her relationship with Stella comes under strain because of her contempt for, and fear of, her sister’s rather brutal husband. As the lies that she has told about her past life are gradually exposed, Blanche suffers a violent confrontation with Stanley.

Anderson’s performance as Blanche is a career high. She begins dressed in glowing beige, carrying her Louis Vuitton bag, exuding superiority and yet, as her incessant drinking makes clear, barely holding things together. By the time the “Wicked Game” lyric “The world was on fire and no one could save me but you” plays, it’s clear that things are falling apart. No one in this apartment will save her. Her pretentions to grandeur contrast beautifully with her fragility, the sense that she teetering on the brink between self-delusion and mental collapse. She flaunts her half-dressed body with a childish coquetry; she reaches out to the similarly lonesome Mitch (Corey Johnson), suggesting the way that damage attracts damage. Anderson not only captures her character’s vanity, but also her essential solitude, which is reflected in a similar feeling which steams off the other characters.

Benedict Andrews’s production is slightly incoherent. On the one hand, it boldly shakes off any sense of period detail, dispensing with the eldritch Southern American setting which usually characterises the play, preferring to set it on a clinically abstract set, which revolves constantly, shifting our perspective. On the other hand, Andrews has not been bold enough to trim the text and take out references to the past that sit uncomfortably in this updated and modern-dress setting. In fact, this timid approach to the text is what makes such revivals awkward: it’s great to update the world of the play, but why not go the full way and edit the text?

Like so many examples of filmed theatre, Nick Wickham’s film is not always as mesmerising as the play might have been on stage. Magda Willi’s revolving minimalist set, with its Ikea furnishings, means that pillars and furniture pass too often in front of the camera, and some shots are frankly eccentric. But there are compensations. Graced with music by Chris Isaak and Cat Power among others, the abstract space of the setting emphasises the story’s mythical side, with its sense that humanity is always fragile, always concealing its wounds under a glaze of drink and deceit, always ready for violence. Underneath, there’s a similarly epic contrast between the old world of the idealized American South and the new world of blue-collar reality.

Nevertheless, the high-octane, passionate acting — especially that of the central trio of Anderson, Foster and Kirby — does succeed not only in holding your attention, but also conveying the ideas and feelings of Williams’s great drama. As clearly as ever, and more so than in some other productions, we are confronted by the fact that neither idealistic lyricism nor brute materialism is a good enough guide to living, yet the playwright’s compassion allows us to sympathise completely with both the perpetrator of sexual violence and his victim. The cruel streak running through the story, in which Kirby’s sensual Stella looks as if she might be turned on by her husband’s violence, comes across decisively. As ever, Williams gives voice to masculinity’s tenderness as well as its toxicity; to female strength as well as vulnerability.

Thanks to costume designer Victoria Behr, the images that remain with you after the final credits roll are of Anderson’s Blanche celebrating her birthday in a gaudy red dress, which shouts scarlet woman even when she’s most child-like, and of her final confrontation with Stanley, dressed this time in a pink mardi gras outfit, face smeared with lipstick, while the dress’s layers of taffeta offer no protection against his predation. In another scene her black polka dot on light yellow dress gives her a deceptively summery air. For his part, Foster’s Stanley sports his floral shirts and crimson silk pajamas with a bruising confidence, while Kirby’s miniskirted Stella is his perfect mate. In the end, the compelling three-hour emotional journey of this American masterpiece leaves you both exhausted and exhilarated. Thanks to this streaming we are once again in the presence of giants, both literary and thespian. It’s that rare creature: a genuinely unmissable show.