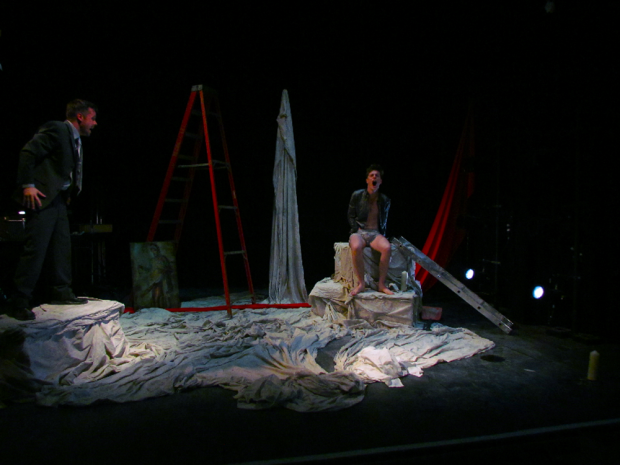 With feminism in the news every day, maybe it’s a good moment to again ask questions about the gender politics of new works of art. When I saw the superb debut of Viagron, a new chamber opera composed by Arne Gieshoff with words by Frank Allison, last Thursday at the Riverside Studios, I was struck by the complex sexual politics of the piece. Based on Petronius’s Satyricon, the story shows the impotent old narrator Encolpius both looking back at the sexual fiascos of his youth and trying recover his ability to achieve an erection. In his various dealings with Circe, Chryton and Oenothea, the question is posed: is he impotent because of the bad magic of the women, or because of his own inability to relax into intimacy? Is he being unsexed by powerful women, or is his sterility a symbol of his civilisation’s decline? The answers are clearly both, and Size Zero Opera’s excellent production — with its brave cast of Richard Latham, John Lattimore, Fleur de Bray, Kathryn Walker, Nika Von Arning, and especially Catarina Sereno, all in fine voice — brings out the piece’s humour as well as its edgy drama. As directed by Matthew Monaghan, who avoids any facile naturalism, Viagron is a viscerally intense and thought-provoking pleasure. Gieshoff’s score scratches, pants and swirls its way through the emotions of the text — great stuff. See it, in a double bill with Darren Bloom’s Kettlehead, at the Arcola.