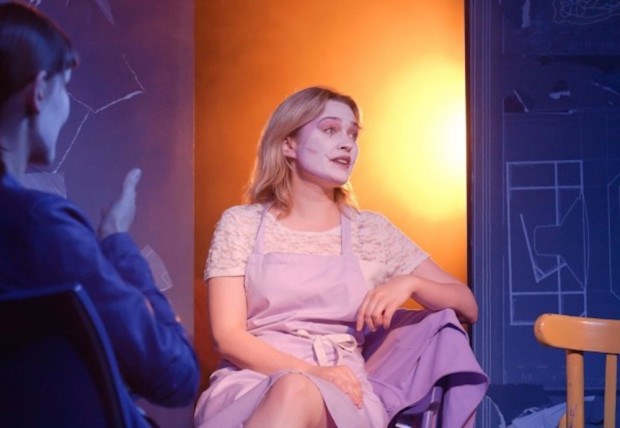 Yesterday, I saw Utopia at the Soho Theatre. This is a multi-authored event which stages visions of a perfect world by a group of writers: Michael Chaplin, Zoe Cooper, Thomas Eccleshare, Alistair McDowall, Dylan Moran (making his playwriting debut), Janice Okoh, Simon Stephens and also Chi Onwurah, Labour MP for Newcastle Central. Other material comes from the life of Ellen Wilkinson and Beethoven, and chillingly from Aldous Huxley and Adolf Hitler. Yeah, it’s pretty eclectic. The evening has a light cabaret feel, and is billed as an antidote to the pervasive dystopic gloom of bad news in hard times. So we have satirical account of a reality show from the edge of the universe, called Humanity, a stand up comedian doing a show in heaven, an awkward dinner party featuring a guy called Ray, and some assorted monologues. There are song parodies, a blizzard of quotations, direct address to the audience and plenty of time to watch the cast — Tobi Bakare, Laura Elphinstone, Rufus Hound, Pamela Miles, Sophia Myles and David Witaker — as they impersonate the six wise fools. It’s one of those shows whose vision and aim you can thoroughly approve of, but without really enjoying all of it. At its worst, many of the sketches feel falsely jolly and awkwardly contrived. But at its best — as in Simon Stephens’s gently amusing vision of Utopia — the evening is touched by beauty and possibility. This collaboration between Steve Marmion of Soho Theatre and Max Roberts of Live Theatre in Newcastle is well staged but never quite leaves behind its origins in the larky atmosphere of alternative cabaret. Not my cup of tea.