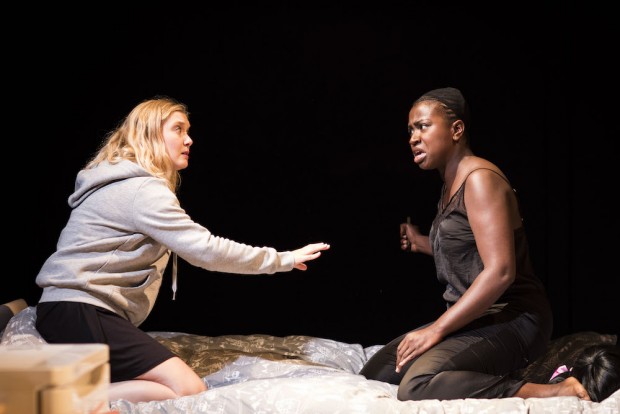 Fleabag was such a massive hit, both on stage and on the box, that it is inevitable that anyone associated with that phenomenon would want to mine a similar seam. Now Vicky Jones, who directed Fleabag and is joint artistic director, with writer and actor Phoebe Waller-Bridge, of new writing theatre company DryWrite, directs her own comedy, Touch, which covers similar ground. Similar, but not the same. While Fleabag was a great cry of agony, grief-fuelled and desperate, Touch is more analytical, less extreme, more nuanced.

Dee, the central character, is 33 years old, and has recently moved up to London from Swansea. She’s got a temporary job, providing maternity cover, and lives in an untidy shoebox flat with a blocked toilet. It’s the perfect metaphoric setting: Dee’s life is similarly messy and she is blocked from understanding exactly who she is and what she wants. In scene after scene, we watch her interact with a string of sexual partners. First her boyfriend Eddie, who she meets through Tinder, then Vera, a woman she bumps into in the gym, then the older Miles, who aspires to teach her about domination, then Paddy, a posh teenager who is interning at Dee’s workplace, and finally Sam, a former Welsh boyfriend.

As these characters come and go, return and return again, we get a good picture of the life of a young woman, who likes wine and likes sex, who has got used to her messy, mouse-infested flat, but who is struggling to fully understand herself. Which means that she spends a lot of energy avoiding the kind of questions that can jump up and bite your behind: how can she be really independent if she can’t cope with her finances? How can she call herself a feminist if she’s attracted to men who boss her around? How can she avoid loneliness if she doesn’t know what she really wants?

Jones’s text underlines all these contradictions in a highly empathetic and enjoyable way, with psychological insights bumping into good jokes, and social comment nuzzling up to spiky putdowns. Dee’s exploration of sex is at its most touching with Vera (although the most explicit scene, which is there in the play text, has been cut), but this relationship also shows how self-centered she is. There’s a moment of burning embarrassment when she realizes that she hasn’t really understood the other woman at all. At the same time, Dee is also drawn back to imagining a life in Wales, with marriage to Sam, kids and all the rest. Although, in some ways, she is a questing spirit, she also has a conservative streak.

The most interesting aspects of Dee’s experimental sex-life are her encounters with Vera and with Miles. Although the scenes with Vera are not completely compelling, there is a strong sense of her tentative self-exploration, of pushing at boundaries and investigating desire. With Miles, the contradictory feelings and attraction of sado-masochism, especially masochism, are calmly articulated. Perhaps the most attractive thing about the play is that Dee is not pathologised, her behaviour is never explained as the result of childhood trauma or abuse. She is simply exploring herself. And Jones’s implicit insistence that desire cannot be controlled and that sex is a mystery — messy, messed up and often ridiculous (but also fun) — to all of us is refreshing in its frankness and honesty and truth.

From the hilariously awkward opening scene, in which Dee performs a comic striptease, to the rather downbeat ending, this 90-minute show is full of humour (men and women will laugh at different moments) and sexual ambiguity (for example, the episode of Paddy dressing up in Dee’s clothes). If towards the end it begins to feel a touch (eek!) formulaic — woman in flat visited by a series of men — the cast’s performances, and Jones’s own discrete directing on Ultz’s deliciously messy set, mean that interest never slackens. Mr Selfridge’s Amy Morgan is effortlessly excellent as Dee, bringing an attractively warm and breezy spirit to the part, and mixing touches of vulnerability with her acidic reposts. When she hears something she doesn’t like, her stare can freeze any man.

The men in Dee’s life are similarly well characterized: Eddie, the priggish boyfriend (James Marlowe), Miles, the slightly sinister and provocative male dominatrix (James Clyde), Paddy, the spoilt and privileged posh boy (Edward Bluemel) and Sam, the competent but confused ex (Matthew Aubrey). Oddly enough, the scenes with Naana Agyei-Ampadu’s moody Vera are less convincing. Never mind, Touch is really enjoyable. If it lacks a very strong storyline, it more than makes up for this in the vividness of its picture of contemporary metropolitan womanhood. Edgy, funny and critical, it is one of the sharpest pieces of new writing currently on the London stage.