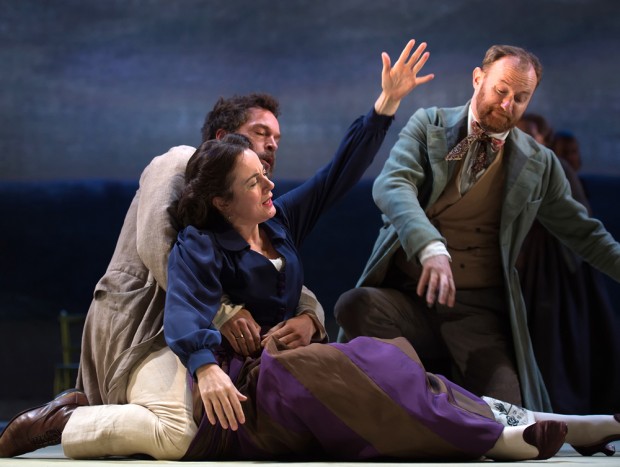 The trouble with the classics is that they are long, complex and difficult. But today’s sensibility favours the quick, simple and easy. So it is no surprise that the National Theatre has flung open its doors to Patrick Marber, who has taken Ivan Turgenev’s 1850s play, A Month in the Country, and given it a brisk makeover. After all, in its uncut original version it runs for four hours. The result is what the Amazon website calls an “unfaithful version”, which is shorter and simpler than the original. Turgenev’s month of rural love, lust and despair has been distilled down to some 72 hours. But does this version, which stars Mark Gatiss and John Simm, work?

Often called a Chekhovian drama, but written a generation before Chekhov, Turgenev’s play is set in a country estate — designed in vivid colours by Mark Thompson — and features a collection of irresolute gentry spending the languorous summer months together. The plot is an interlocking series of stories of love, with its beating heart the figure of Natalya, a middle-aged woman whose passions get the better of her: the household is headed by Arkady, who is an improving landlord, and the husband of Natalya. Their marriage is arid so Natalya is having a long but unconsummated relationship with Rakitin, Arkady’s best friend. When a young tutor, Belyaev, arrives, Natalya falls head-over-heels in love with him. But then so does Vera, her 17-year-old ward. For his part, Belyaev seems to be more attracted to Katya, a maid.

Add to this a host of other characters: Arkady and Natalya’s 10-year-old son, Kolya, who adores Belyaev; Anna, Arkady’s mother; Lizaveta, Anna’s companion; Schaaf the German tutor; Bolshintsove, an elderly rich neighbour and the suitor of young Vera; Matvey, a servant who loves Katya; and, last but not least, Shpigelsky, the local doctor (Gatiss), who is incompetent but charming. You can easily see why the original version of the play is a baggy masterpiece. Marber’s version, by contrast, is fast on its feet – lasting about 135 minutes – and its action unfolds with a kind of joyous rapidity.

The keynote of the writing is a stress on the comic absurdity of human endeavour, and an ironically cool detachment from the characters. There is an enjoyable brightness in the dialogues, but also a sense that there is a pell-mell rush from one scene to the next. Unlike Chekhov, who is the master of the subtext, Marber here spells out most of the conflicts, dotting i-s and crossing t-s, giving the characters a fair bit of self-awareness and a handful of revealingly self-reflexive speeches. This has the advantage of clarity, if not subtlety. The jokes are good, and they come thick and quick. Typically, the doctor complains: “How am I to survive if people simply get better?”

The chaos caused by amorous desire, even in an age of restraint, is well presented. Love is a fever. Natalya, who understands how her relationship with her father has damaged her psyche, falls passionately in love with an entirely unsuitable man who is half her age. Meanwhile, her long-standing love, Rakitin (Simm), is stuck in an unending and unsatisfying relationship with her, to the frustration of both. By contrast, the young love expressed in different ways by Vera, Matvey and Belyaev is like a flame that flares up quickly, only to be snuffed out almost immediately. Most comically, the scene in which the doctor proposes marriage to Lizaveta is a comic masterclass, played brilliantly by Gatiss and Debra Gillett.

Other themes include the pre-Chekhovian feeling that the gentry is wasting their time in boredom, along with intimations of violent social and political change. Somewhere on the horizon a revolution is gathering strength. At the same time, what Karl Marx called the “idiocy of rural life” is pictured in a comic register, symbolised by Natalya’s statement that “It is wrong to jump on a cow”. Various shades of despair and disappointment afflict many of the characters, and leave a rather sad aftertaste. But although there is plenty to enjoy here, I did feel that a complete rewrite that reimagined the story for our contemporary world would have been more interesting. As it is, this is Turgenev lite.

Marber directs in a competent, but rather uninspiring way (just think what Katie Mitchell could have done with this material). So Amanda Drew is better at conveying the self-loathing Natalya’s fragility than her charisma, but maybe her ordinariness is precisely the point in this version. As ever, Gatiss is a joy to watch, especially when playing drunk or when he’s struck down with lower-back pain, and both Simm and John Light (Arkady) are suitably restrained and, when neeeded, passionate. Newcomer Lily Sacofsky’s Vera and Gawn Grainger’s Schaaf work well in support. A cluster of visual jokes — about raspberries, kites and bad backs — help the fun along, but this is an evening that is never more than the sum of its parts. But maybe that is the fate of all such middle-of-the-road adaptations.