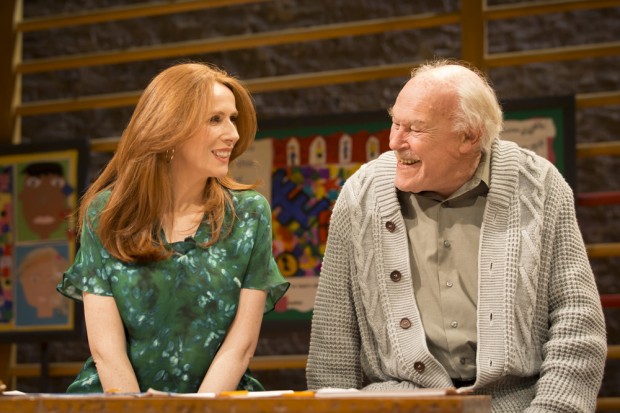 Thank fuck, it’s over. I mean the General Election. No more campaigning, no more leader debates, no more anti-Miliband hysteria. But there’s still no end to theatre gimmicks that exploit public interest in what is one of the tightest elections in living memory. First prize for the biggest stunt must go to this venue: artistic director Josie Rourke and playwright James Graham (who is man of the day, of the month, of the year) have created a fictional polling station, located in a Lambeth school gym and designed by Robert Jones, where people er, vote, and the experience is broadcast live on More4.

The Vote looks at what typically happens on election night through the eyes of polling station officials — although the blissfully starry cast of Catherine Tate, Mark Gatiss and Nina Sosanya make this evening a rather untypical one. Not really like my local primary school at all! Likewise, it can’t be every polling station that features such recognisable actors as Judi Dench, her daughter Finty Williams, Bill Paterson, Timothy West, and Jackie Clune among the 50 or so voters who arrive here to cast their ballots.

As the chief polling officer Steven (Gatiss) and his two clerks Kirsty (Tate) and Laura (Sosanya) help smooth the wheels of democracy, the show’s conceit is to perform its 90 minutes of action — which starts with a mature black woman stumbling and spilling the contents of her carrier bag and ends with a newborn Scottish baby called Nicola — in real time from 8.30pm until 10pm, when the polls close on 7 May, election day. And to broadcast the events simultaneously on More4. Billed as an “unprecedented experiment and a major innovation in theatre and television from Channel 4, the Donmar and the team behind Educating Yorkshire”, the play’s short run ends on election night so the only way you can see it now is by going to Channel 4 On Demand.

The main story is an enjoyable farce which kicks off when the absent-minded pensioner Fred Norris (Timothy West) manages to vote twice. Although at first Steven isn’t aware of this, Kirsty and Laura are. It is their worst nightmare. To fix the mess, Kirsty decides to take electoral law into her own hands — and her increasingly desperate attempts to balance Norris’s extra vote with another one fuel the action. As the twitchy Steven finds out, the tension rises… Meanwhile, a host of other characters arrive at the polling station, often with a point, or two, to make.

Graham’s writing is effective and there are several timely jokes about recent electoral subjects, from Miliband’s Edstone to the importance of marginal seats in an election that is too close to call. Some of the humour is right on the nose — and the Donmar Warehouse comes alive with the sound of joyous laughter. But other moments are occasionally marred by didactic and patronising little speeches about democracy and about how the rather arcane rules of polling work.

The picture of the nation that emerges from the polling officials interacting with some 50 members of the great British public is instantly recognisable. The country is multicultural and inclusive, a rainbow nation; it is occasionally drunk and racist; it is a meeting place of many nations and many migrants; it is sexually adventurous; it is rule-bending and keen on muddling through; it is tolerant and outspoken; it is eccentric, and proud. There are lovely portraits of an independent candidate and a polling agent (Paul Chahidi and Gerald Horan) who embody the best of British. This is the kind of people we like to think we are.

In the end, this is a one-off multimedia event rather than a play of lasting significance. Although it is a complete joy to watch some of our finest actors — Gatiss, Tate, West, Dench, Paterson and Sosanya — surely this buzz can’t blind us to the thinness of The Vote’s plotting and the similar thinness of its ideas? Yes, this is an enjoyable stunt, but hardly the most experimental piece of theatre currently on our stages. Personally, I’d prefer to see a really satisfying play.