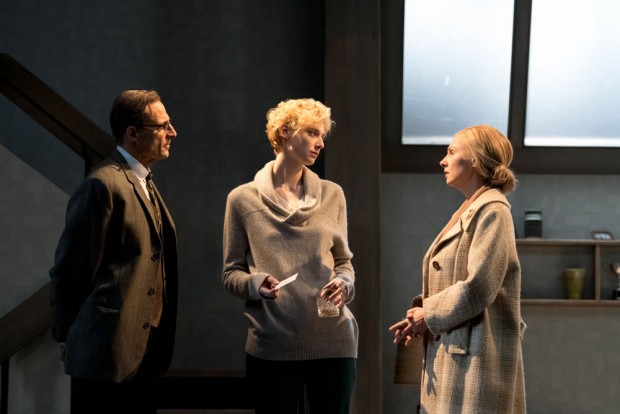 At first, I was a bit confused by this play’s title. After all, David Hare gave his 1998 adaptation of Arthur Schnitzler’s La Ronde the moniker of The Blue Room, which coincidentally is the same title as Mathieu Amalric’s very recent adaptation of a thriller by Georges Simenon. Now Hare has taken another Simenon thriller, La Main, and called it The Red Barn, which immediately suggests the murder of Maria Marten in 1827. But Hare and Simenon’s barn is not in Suffolk; it’s in Connecticut and the year is 1969. Hope that’s clear. Even if not, a brilliant cast headed by Mark Strong and Elizabeth Debicki, seen in The Night Manager, means that this 110-minute thriller has, at every turn, the power to surprise as well as inform.

Initially, everything seems simple: two professional couples — glamorous Ray and Mona Sanders and the more prosaic Donald and Ingrid Dodd — attend a nice upper-middle-class party. As the January weather turns stormy they decide to go home, but their car gets bogged down in a violent snow storm. They battle against the whiteout on foot, but only Donald, Ingrid and Mona reach safety. Ray has been lost. So the first question is: where is he? Is he dead or alive? Has he been murdered, accidentally killed or committed suicide? And can the local police lieutenant, Olsen, solve the mystery?

Then it becomes apparent, in typical Simenon fashion, that we are lost in a story as dense as any snow storm, and that what will most surprise us is that the victim is quite other than we originally thought. On the way, we will have enough time to examine the blackness of the human heart, and ponder how near each of us might come to committing murder. There’s a chilly amoral atmosphere that hangs around this story, which is as much about the way we seem to be actors on the stage of life as it is about jealousy and dissatisfaction.

As the situation develops, The Red Barn becomes a study of the triangular relationship between lawyer Donald, his wife Ingrid and Ray’s wife Mona. Fortysomething Donald and Ray have been best friends since college so this is an account of male friendship which considers how men compete through their possession (there is no other word) of the women around them. At the same time, this is a play about self-knowledge and how we form our ideas about our lives, and about our spouses. Yes, it is a bit uncomfortable. It also contrasts the sense of community in rural Lakeville, Connecticut, with the alienation of urban East River, New York, but never uncritically, and it plays delicious games with the metaphor of sight: how much do we see? Of ourselves? Of others? And, of course, looking is never the same as observing.

Hare’s style in this adaptation respects the transposition of Simenon’s French style, in which couples discuss the state of their relationships in a more philosophical manner than is common in the Anglo-Saxon world, onto the slightly alien terrain of late 1960s America. I liked the slightly distancing coolness and the intellectuality of the dialogues. There are no references to local politics or culture; everything happens inside the heads of the protagonists. So instead of social commentary, there is psychology and powerful metaphors: Ingrid’s eyes see everything; the snow storm is so dense that no one can see anything and everyone is blinded…

Aptly enough, Robert Icke’s superbly compelling production begins with a giant eye and has a cinematic, almost Hitchcockian, sense of constant movement, with fade ins and fade outs, which suits Hare’s script. On Bunny Christie’s lovely, elegant sets, and helped by Paule Constable’s lighting and Tom Gibbons’s soundscape, the three main actors perform an elaborate game of chess: Strong’s Donald at first timid behind his glasses then almost hoarse with emotion, while Debicki’s light and flighty Mona contrasts well with Hope Davis’s calm and protective Ingrid. With each scene telling us something new, there’s a real sense of revelation as the evening progresses, so it seems ungenerous to carp that most of the dialogue is too clear, and too lacking in subtext. Better to sit back and enjoy the ride — right into Simenon’s dark nights of desire.