Home » Reviews » The Mirror and the Light, Gielgud Theatre

The Mirror and the Light, Gielgud Theatre 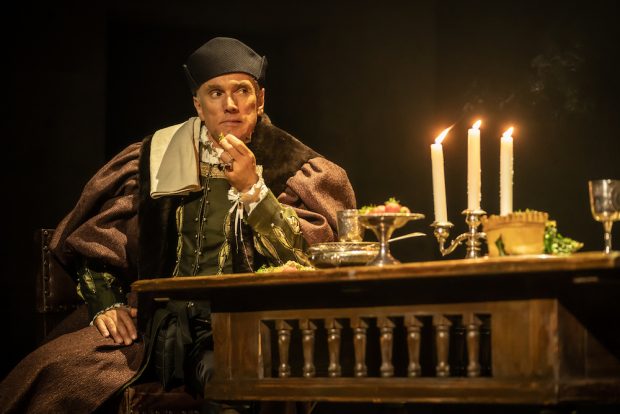 This is a labour of love. Hilary Mantel has adapted The Mirror and the Light, the third novel of her Tudor trilogy, in collaboration with actor Ben Miles, who is the Royal Shakespeare Company’s regular Thomas Cromwell, having played the role of Henry VIII’s chief fixer in stage versions of Wolf Hall and Bring Up the Bodies (2013–14), the first two novels of this epic. On paper this is a dream team. But is this final chapter of Mantel’s double-Booker Prize-winning trilogy as good as the previous episodes, which were adapted by Mike Poulton?

In Mantel’s case, creating a stage version of her 900-page novel is like turning a rich red wine into something like tap water: it keeps us alive, but it doesn’t really hit the button. Still, the familiar story will interest any fan of Tudor history. In this part, an aging and limping Henry VIII has wed Jane Seymour, and although she gives birth to a much-longed for son, the future king Edward VI, she dies in child bed. Devastated by her death, Henry is desperate for another wife, and more children. After much discussion, Cromwell, his long-serving minister, comes up with Anne of Cleves, a German princess, whose family will be useful as a political ally in a Europe dominated by France, Spain and the Holy Roman Empire. There is only one problem: when the couple meet, Henry hates the sight of her.

The story is told with great clarity, although the choice of making this a straight adaptation — an external view rather than, as in a novel, an internal monologue — results in a costume drama which is heavy on ruffs, puffs and doublets, while having very few moments of imaginative writing. Occasionally, there is a scene — such as when Cromwell is visited by a variety of hideous demons — which lifts the show theatrically, but for the most part the aesthetic is RSC standard. You can almost tick the boxes: early Tudor music — tick; dance sequence with animal heads — tick; dance sequence without animal heads — tick; faux-folk singing — tick; ponderous attempts at humour — tick. Yet, despite this unexceptional writing, there is much material that is engaging and even a touch contemporary.

The conflicts over class, as the aristocrats such as the Duke of Norfolk jostle for influence over the sovereign, furious that Cromwell, the working-class lad from Putney, is chief minister, come across powerfully, while equally resonant are the brief moments of female assertiveness (from Lady Mary and Anne of Cleves). The conflicts over England’s relationship to Europe, with ideas of this island’s exceptionalism, and its future sunny destiny, are richly ironic, and the Pilgrimage of Grace, when Yorkshire rises up against the religious reformists of the south, is naturally reminiscent of current discourse about the north. Discussions with foreign envoys about power politics and dynastic marriage are sharp and to the point. At the same time, there is a genuine sadness about seeing Cromwell finally reach the scaffold.

But the general tone is that of history lite. For although Henry is a fierce despot, we never get the feeling here that he is a real threat, nor any true sense of his close relationship with Cromwell. Instead, he is more Boris the clown than Ivan the Terrible. In compensation, we get the appearance of three ghosts from the past — Cardinal Wolsey, Thomas More and Cromwell’s deceased father — whose spirits argue with the protagonist and lend a Shakespearean flavour to the whole proceedings. It has to be said that director Jeremy Herrin does a great job in keeping the pace of the story hurtling forward and creating a thoroughly accomplished evening. He certainly knows how to get a lot from his cast.

But don’t expect fireworks. Miles as Cromwell delivers a low-key, but marvelously sincere performance, which however is often overshadowed by the fury of Nicholas Woodeson’s angry Duke of Norfolk, Nicholas Boulton’s compulsively jokey Charles Brandon and Leo Wan’s fawning Richard Rich. But Nathaniel Parker’s Henry lacks depth and danger, and most of the other actors have parts too small to shine in. Still, there’s much to enjoy in designer Christopher Oram’s beautifully hued costumes and simple set, crossed with an imposing giant blue crucifix or the cell bars which evoke the Tower of London. If this is a lightweight rendering of a heavyweight novel, it simply proves that a labour of love is not necessarily a good night out. If you want that, then maybe try Toby Marlow and Lucy Moss’s Six, the terrific musical version of the experiences of the women in Henry’s life.