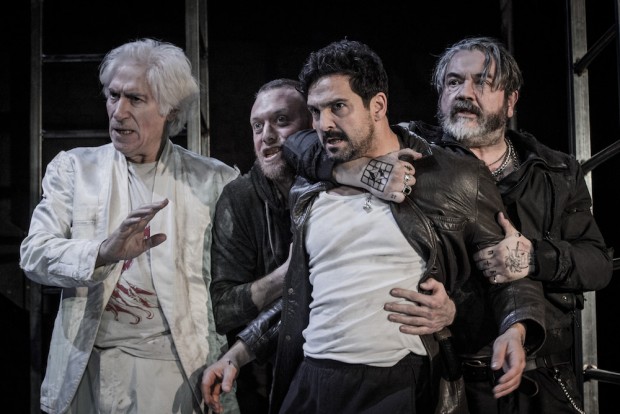 Anniversaries are slippery things. This year is the centenary of the Russian Revolution of 1917, but which of the two upheavals of that year do you celebrate, or commemorate? The enterprising Arcola Theatre in East London has chosen to start its Revolution Season with a revival of Maxim Gorky’s The Lower Depths (1902), which has opened a couple of months short of the 100th anniversary of the February Revolution that toppled the Tsar and began the process that led to the triumph of the Bolsheviks in October. In fact, the February Revolution happened in March, except that Russia used the older Julian calendar, which was almost two weeks behind the rest of Europe, a metaphor for the country’s backwardness.

The Lower Depths is a rarely performed large-cast play that offers a panorama of poverty in the last years of Tsarist Russia. Its portrait of human degradation in a doss-house somewhere on the Volga, far from the great urban centers, was originally staged by Konstantin Stanislavsky at the Moscow Arts Theatre, and was much more political in its edgy depiction of reality than most plays seen in Moscow at the time, and its details about drink, thieving, drink, prostitution, drink, cheating at cards, drink, borrowing money, drink, wife beating and, of course, more drink, remain defiantly realistic.

The main trouble with the play is that it has no central plot, and so its incidents form a kind of impressionistic sketch of social life, while at the same time implying that these social conditions cry out for reform. Yet there is no explicit call for revolt! The down-and-outs, drifters and derelicts that inhabit this doss house are not radicals: they include a selfish locksmith and his consumptive wife, a mouthy prostitute and a market stall-holder, a card cheat and a decayed aristocrat, an alcoholic actor, a wise old man and a Muslim. Living in the dank basement of a house run by Kostyliov and his wife Vassilissa, who are supported also by the policeman Medvediev, they talk endlessly, but uselessly, about their dreams.

The main incidents arise when Luka, a rather ragged pilgrim, arrives and begins to dispense his wisdom to all and sundry. He tends the dying Anna even when her husband has given up on her. He hands out humanist precepts and good advice. At the same time, it is soon obvious that Vassily, the thief, who has been having an affair with Vassilissa, is now more interested in her younger sister, Natasha. While Gorky is democratic in seeing that most of the 18-strong cast get a chance to voice their aspirations, he also allows himself to ramble — especially in the play’s long and inconclusive third act.

The high points remain the Christian Luka’s vision of a utopia of virtue, Satin the card sharp’s paean in praise of humankind and the climactic outburst of domestic violence. But moments of uplift are pretty rare in this rather depressing picture of desolate poverty. It reminds me forcefully of Marx’s idea of the lumpenproletariat, people so downtrodden that they had no pride and no political consciousness — people recruited by regimes as thugs and bully boys. The violence of Gorky’s underworld denizens suggest that this might be right. His characters are selfish and have no sense of solidarity — except the garrulous sentimentality of drunks together. The only time they are kind is when a ray of Christianity lights up their souls.

Helena Kaut-Howson’s modern-dress production is a bit of disappointment, and I would argue that a historical setting might have served the aims of the Revolution Season better. She uses a punchy translation of the play by Jeremy Brooks and Kitty Hunter-Blair, and the set, by Iona McLeish, involves metal ladders and frames that feel suitably cold and unfriendly. Running at two hours and 40 minutes, the experience feels like a long haul and I’m not convinced that the actors are performing as well as they could. For an ensemble, there were too many moments when they spoke to the audience rather than to each other, and they didn’t really seem to own the space. Still, certain passages — by Jude Akuwudike (Medvediev), Jim Bywater (Luka), Abhin Galeya (Anna’s husband), Ruth Everett (Vassilissa), Jack Klaff (Satin) and Doug Rao (Vasska) — rang true, even if they couldn’t quite save the show.

The rest of the Revolution Season comprises Anton Chekhov’s The Cherry Orchard (1904), which ran in repertory with The Lower Depths at Stanislavsky’s Moscow Arts Theatre at the start of the 20th century, plus one new play, Oladipo Agboluaje’s New Nigerians. Even while having some doubts about the opening production, it’s worth saluting the ambition of the enterprise, as well as its timeliness and relevance: we still need reminding that there are plenty of lower depths in our country as well.