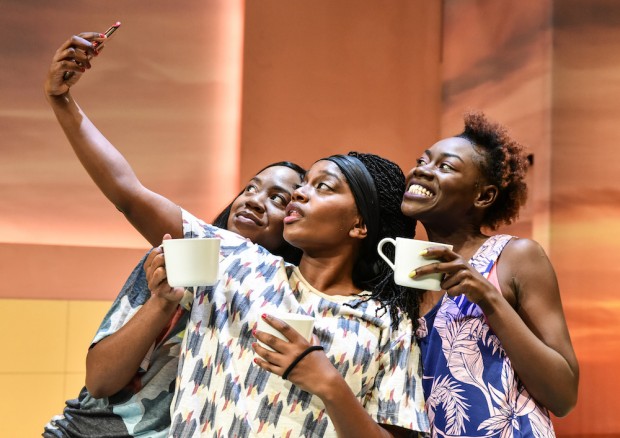 Because of the #MeToo movement, and the revival of feminist protest, the theme of sisterhood now has a much stronger cultural presence than at the start of the decade. It seems to be a great time to be a female playwright, and Ifeyinwa Frederick’s irreverently noisy, and often hilarious, debut play is proof that there is a lot of upcoming new talent waiting to make its mark. So it’s great that the Hampstead Theatre, which under Edward Hall has had a very good record in staging work by first-time playwrights, is using its downstairs studio space to host her provocatively titled three-hander, with its black female cast and gallons of millennial sensibility.

Set in an Ibiza hotel room, the story features three 25-year-old women, who have been best friends since secondary school: Alex, Bim and J (Jasmine). The action begins on the third night of an alcohol-fuelled holiday with a frank chat about sex between Bim, a British-Nigerian who is “a self-proclaimed hoe”, and Alex, while J is occupying the bathroom. Evidently, Bim is having a wild time, enjoying a different man every night; by contrast, Alex is less frantic. Bim is guzzling rosé, and there is plenty of Sambuca and vodka also on offer, but Alex is taking things slowly. Of the three, she is the only one with a regular boyfriend, Stephen, who is definitely not part of this girls only trip, and she is thinking of sharing a flat with him back home. But will distance make her heart grow fonder, or will the freedom of being single in the sun tempt her to betray him?

Likewise, J’s character offers a contrast to that of her friends. Outwardly, she is a very successful young businesswoman, but in fact she’s given up sex for three months and is effectively celibate. Of the three, she is stricken by what the programme identifies as a “quarter-life crisis”, a form of pre-midlife blues. She is anxious about just enjoying her sexual freedom because she is unsure if there is any future in just having fun. Maybe she should just settle down? Find someone to love? It doesn’t help that her Aunt Mavis is texting her every day, suggesting a Singles Mingle and sharing pictures of possible longterm partners. J is definitely under pressure.

But before this sunny holiday takes an even darker turn, Frederick treats us to a couple of scenes which blast us with a blaze of detail, some excruciating, some hilarious, about the sex lives of this trio. Calling themselves “the three hoes of Essex”, they happily proclaim their sexual freedom — and in huge flesh-coloured letters a mile high. They are proud of who they are. Although they are also super-conscious of how society might judge them. As Bim says, “Once you’re a woman doing as she pleases with her body, in someone’s eyes you qualify for hoe status.” And the best way to confront this kind of prejudice is to tackle it head on. Which they do. And how.

Frederick, however, is also clear that although you can get away from your normal home life and work routine by going on holiday — and businesswoman J has to pay a pound into the kitty every time she checks her work email on her phone — you can never escape from who you are. So while Bim luxuriates in her full embrace of all aspects of carnality, it soon becomes clear that she is not quite the happy-go-lucky joker that she appears to be. Likewise, we soon begin to suspect that her two best friends are also acting a part: Alex is trying too hard to be the faithful girlfriend and J is trying too hard to be the celibate, serious one.

From the start, The Hoes is so amply alive: it gives a thrillingly vivid and highly charged account of what it feels like to be part of a mid-twenties sisterhood. The explicit banter, the sudden switches of feeling, the deep understanding of each other’s characters, all come across with the unmistakable buzz of a super-charged vibrator. Written with enormous pace and energy, the first minutes offer a revelatory picture of contemporary female youth. And, because of the circumstances, the chat is all about sex, and then some more about sex, and, after a few drinks, they finish the night with more about sex, sex, and SEX. And when not talking about it, they share their intimate photos, and show their clit piercings. Yet despite all the intimacy and the breathless passions, the show’s sprinting 90 minutes allow plenty of time to wonder about just how good this kind of writing is.

To begin with, it doesn’t quite pass the Bechdel Test. If a realistic representation of women requires scenes in which they talk to each other about something other than a man, then it has to be admitted that, even allowing for all the chat about self-pleasuring and explicit selfies, most of the exchanges here involve the subject of men. Despite the occasional line about music, these three are focused on only one thing: not only sex, but also men, men, men. Even when J is deep in her “quarter-life crisis”, the best way out seems to be to have a hetero man as her exit strategy. So amid the belly laughs and the vigorous twerking, the joy of the show conceals some serious misgivings.

Also, I was a bit confused about the exact backgrounds of these young women. Two at least mention having studied at Oxford, and — given that they well-spoken — they are all from highly respectable backgrounds. So why aren’t they more focused on work and networking? Given that they talk obsessively about sex, their language is also oddly chaste: the words they use are masturbation, vagina and penis, rather than the synonyms you might expect young people to use. Although, to be fair, there is one humorous discussion about the use of “lady garden” and “pussy”. So while it’s great to meet some onstage black youngsters that aren’t involved with gangs or crime, I’m not sure if their social background is outlined well enough here.

Still, for long stretches Frederick provides a feast of explicit hilarity which vividly illustrates the life stories of these young women. Serious issues about careers, settling down, mental distress and consensual sex do occasionally creep into the jokey rapport and highly energetic music and dance sequences, directed with flair by Lakesha Arie-Angelo on designer Anna Reid’s colourful Ibiza set. The cast is strong, mutually supportive, and constantly alive to the play’s switches in tone, with Aretha Ayeh (Alex) and Nicola Maisie Taylor (J) providing a good grounded contrast to Marième Diouf as the more volatile, more fragile Bim. Still, although this may be rather slender and a bit imperfect as a play, it’s a very impressive debut.