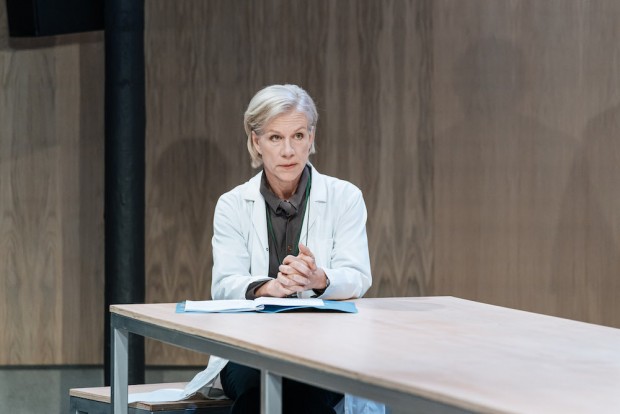 After six years, associate director Robert Icke bids farewell to the Almeida Theatre. In this time he has pioneered contemporary versions of classic stories, such as 1984, Oresteia, Uncle Vanya, Mary Stuart and Hamlet with Andrew Scott. Against the trend for short and snappy shows, some of Icke’s plays are examples of marathon theatre, where the sheer length of the performance wears down audience resistance and creates an experience of deep immersion. Now, directing his own very free adaptation of Arthur Schnitzler’s Professor Bernhardi, which stars the brilliant Juliet Stevenson, Icke challenges us once again to stay the three-hour course.

Schnitzler’s original, which was first staged in 1912, concerns an ethical conundrum, and Icke at first faithfully reproduces it: Ruth Wolff (Stevenson) is an eminent Jewish doctor treating a teenager who is dying from sepsis following a botched abortion. When a priest (Paul Higgins) arrives to give her the last rites, pointing out that her Roman Catholic parents have asked him to intervene, Ruth refuses on the basis that she doesn’t want to distress her semi-delirious patient. Is the doctor right to protect the patient? Is the priest right to insist on a religious ritual? Is there no way of resolving this clash between science and religion?

At work, Ruth leads the Elizabeth Institute, a private foundation whose main aim is to treat, and research the causes of, dementia. Her colleagues are a collection of high-powered doctors (Oliver Alvin-Wilson, Pamela Nomvete, Daniel Rabin, Naomi Wirthner), as well as the press officer (Mariah Louca) and young new colleague (Kirsty Rider). As the repercusions of her decision to bar the priest escalate, fueled by social media and a kind of mass hysteria, a Health Minister (Nathalie Armin) becomes involved. At home, meanwhile, Ruth lives with her partner Charlie (Joy Richardson) and opens her doors to Sami (Ria Zmitrowicz), a schoolgirl who seeks sanctuary from her own home life.

Icke’s version recasts the original in one radical way: he twists the ethical debate into a question of identity politics. So not only is the original antagonism between a Jewish healer and an apparently Roman Catholic patient preserved, but this is presented though the thoroughly contemporary lens of the woke generation. So issues about ethnicity, in several different dimensions, and gender and sexual preference are aired with passion and clarity, especially in the compelling Act Two television debate scene in which Ruth has to defend herself from the attacks of several religious and ideological interlocutors.

Stevenson, who is on stage for the entire show, including the interval, makes Ruth a monumental and mesmerizing character. For all her character’s faults (she is arrogant, pedantic, sharp, sarcastic and a bit of a snob) the actor is totally convincing as an inspiring clinician, dominating the play with an effortless authority, stamping her will on all the opening scenes. Gradually, however, as events crowd in on her, her vulnerability begins to appear: at first it’s just a change in her eyes, then an altered glance and finally a visible weight on her shoulders. By the end, as the crisis deepens, her anger is scalding hot and she radiates raw loss. She becomes haggard, death-like.

Icke not only discusses the arguments for and against Ruth’s actions with her patient, but he also brings in plenty of material about institutional politics, with a committee meeting scene where a new appointment is discussed (are there too many female Jewish doctors at the institute?) and then political considerations of funding and donors. As the tide of opinion swings against Ruth, we get insights into her character: in one lovingly awkward scene, her lover tries to get her to shrug off her middle-class cool and just dance. At every point, Icke underlines the doctor’s discomfort at losing a patient, and questions how free we are to define ourselves and choose our own identities.

Despite several moments of repetition, this all works well, and Icke ups the stakes by playing a daring game with his casting. Every one of his choices of actor, apart perhaps for Stevenson, differs in a significant way from the character they are playing, but this only becomes stealthily apparent. So you can expect women to play men, men to play women, black actors to play white and white to play black. One living actor plays a ghost. And then there’s religion: who is Jewish and who Christian (and what does any of that actually mean?). And then what about sexual preference? The result is theatrically inspiring, often astonishing and always thought-provoking.

On Hildegard Bechtler’s neon-lit set, so reminiscent of hospital corridors, the play runs smoothly through scene after scene on a gently revolving stage while a lone drummer (Hannah Ledwidge) provides a percussive commentary. Although the story is dominated by its portrayal of Ruth, who slowly evolves into a genuinely tragic figure, and Icke provokes the white middle-class members of his audience by forcing them to acknowledge the relevance of identity politics, all of the acting is first rate. And there are even subtle suggestions of Brexit in phrases about compromise and bumps in the raod. Often funny, always engaging and with a compelling central performance, this is one theatre marathon that is moving as well as energizing.