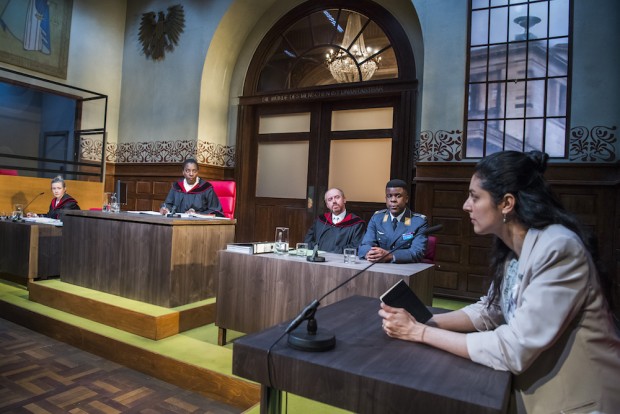 Can the theatre be a courtroom? A good public place to debate morality and to arrive at profound decisions? You could answer this with a history lesson that ranges from the ancient Greeks to more recent tribunal plays in the 1960s and 1990s. But I’ll just concentrate on Ferdinand von Schirach’s Terror, which premiered simultaneously in Berlin and Frankfurt in 2015 and now gets a British outing at the Lyric Hammersmith. It’s a courtroom drama with a gimmick — the audience gets the chance to vote on the result of the trial. But is the gimmick better than the play?

Despite its deliberately inflammatory title, which in the current climate guarantees publicity, this is a play about personal and legal responsibility. A star German military airforce pilot, Lars Koch, is charged with murder because on 26 May 2016 he shot down a Lufthansa airbus, which had been hijacked by terrorists and was being flown towards Allianz Arena in Munich, where an international football match was taking place. Koch has killed 164 innocent people, but saved the lives of 70,000 other innocent individuals. Was he justified in doing this?

The case takes place at a session of the 16th division of the Criminal Court, under German law, which has a less adversarial system than our own. This means that Nelson, the state prosecutor, is more interested in getting at the truth than in scoring points against Biegler, the defence counsel (although they do spar a bit). Von Schirach, who is a lawyer as well as a bestselling author, tells the story by using only three witnesses: Koch’s superior officer, Lieutenant Colonel Lauterbach; Franziska Meiser, who represents the victims’ families; and Koch himself. The judge orchestrates the proceedings, giving a factual introduction, explaining various points of law and finally conducting the vote by the audience which determines the result (in the playtext there are two conclusions, which depend on the outcome).

As a courtroom drama, Von Schirach’s play is not a great success. There are too few witnesses, the facts are uncontested, and there are only a couple of mild surprises that add a touch of complexity to the charge. Basically, Koch has acted illegally and has disobeyed orders. He is guilty. But his defence is that he acted for the common good and that he was justified in killing 164 people in order to save the lives of 70,000. As the arguments go back and forth, questions arise about the German Constitution (lots about the value of life), about aspects of Kantian philosophy, as well as a couple of hypothetical case studies from ethics textbooks.

All this is vaguely interesting in an abstract kind of way, and would be good material for a law school seminar. As a drama, it doesn’t work. The conflicts are too legalistic and the central liberal paradox too weak (the urge to forgive creates monsters: a liberal verdict of not guilty gives license to the military to act as heroic individuals rather than obeying orders, and that really is not a good thing). Like many courtroom dramas, the aesthetics of the piece are dull: office furniture, formal gowns and a static performance style. Okay, so the design by Anna Fleischle is meticulous, but there’s a limit to how interesting a courtroom wall can be.

That said, David Tushingham’s translation is clear and colloquial, and director Sean Holmes has done us all a great favour by vigorously pruning the overblown text. It’s hard to praise the actors in a piece that has so little drama, but the ensemble work hard to deliver the goods: Ashley Zhangazha (Koch), Emma Fielding (Nelson), Forbes Masson (Biegler), John Lightbody (Lauterbach), Shanaya Rafaat (Meiser) and Tanya Moodie (Judge). For many, the best bit of the show is the audience vote, but that seems to me to favour gimmick over substance. Terror stands guilty of being too abstract and too boring.