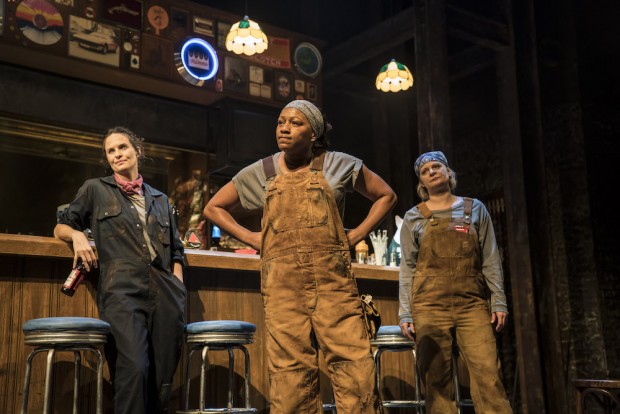 The word “rustbelt” is really eloquent in its evocation of industrial decline. After all, rust is friable, decaying and messy; it stains; it corrodes; it falls apart. So it is a really apt metaphor for post-industrial locations where those who are left behind have to pick up the pieces of work, and of their own lives. In American playwright Lynn Nottage’s brilliant Pulitzer-Prize-winning play, this situation is both documented and dramatized with impressive skill and deep feeling. It also serves as a grim reminder of the economic decline that fueled both the election of Donald Trump — and Brexit.

Set in the rustbelt town of Reading, Pennsylvania, in 2000, the drama takes place in Mike’s bar, where workers from the local steel factory hang out. As Stan, who runs the place along with his Latino assistant Oscar, serves drinks, three women workers are among the regulars: fortysomethings Cynthia, Tracey and Jessie. They have worked at the factory since they left school, and Cynthia’s son Chris and Tracey’s son Jason have followed in their footsteps. A less welcome presence is Brucie, Cynthia’s ex, a man who has sadly gone downhill since he was involved in a long-running strike at another factory.

Tensions arise between the three women when Cynthia, who is African-American, and Tracey, her oldest friend who is white, both apply for the job of supervisor. When Cynthia gets the job, Tracey feels personally betrayed and begins to articulate racist feelings that have previously been suppressed. The divisions between the employees are further intensified when it is Cynthia who has to tell her work mates that the company wants everyone to accept a 60% pay cut to save the plant. This leads to a lock-out, scabs crossing the picket line to keep the firm going and a climactic act of violence.

Based on comprehensive interviews with local residents, undertaken over two years as Nottage visited Reading, Sweat shines with authenticity and gives off a real empathy for her fellow Americans. Although she makes a number of political points, the polemic is never allowed to bury the humanity of the people involved. At heart this is a play about three mature women, and their friendship. When they fall out, the rage comes from the depth of their love for one another, accumulated over decades. It is tragic.

The importance of work, and the vital significance of the factory, lie at the center of the story. Work is identity; work is lifestyle; work is meaning. For Cynthia, her union card is a symbol of racial equality, and her employment is a means of integration into the American Dream. By contrast, Tracey is more militant as a unionist and her outspoken nature may be one reason for her failing to get the job of supervisor. Yet, she is also a complex character: her grandfather was a German craftsman and builder so her family has a heritage of pride in work. For Jessie, factory work takes priority over her other desires in life, and always has done.

Nottage paints a vivid picture of the traditional American steel works, where you needed to know someone on factory floor to have a chance of getting in, and where jobs were handed down from parent to child. She articulates the frustrations of Oscar, who is treated as an immigrant and blocked from working at the company, as well as the aspirations of Chris to better himself, while at the same time his best mate Jason stubbornly refuses to think beyond the factory walls. All of these ingredients lead to the final act of savage violence. At the start and throughout the play, Nottage cleverly includes several short scenes set in 2008, which show the consequences of this crime, while keeping us guessing who its victim was.

This story is an example of how contemporary American drama tackles the idea of the American Dream, and its bleakness and sadness outweighs the fun and jokes. It is, after all, the story of a deep defeat. Psychologically, it portrays the workers of heavy industry as naïve about both their employers’ motives and their union’s power, unaware of the changing nature of capitalism and society. The physical demands of their jobs are stressed and there is no doubt that they are often injured and laid off. At the same time, it is really heart-rending to see the emotional devastation that follows the collapse of heavy industry. When the traditional work leaves, there is nothing left but shit jobs and addiction.

Nottage writes with fulsome generosity, giving all of her characters enough air to have their say, and taking time to explore their different points of view. It’s hard to forget Cynthia’s painful description of Brucie’s shortcomings, Tracey’s funny anecdote about a trip to Atlantic City and Jessie’s heartfelt lament over her lost youth. But the flair of the playwriting is at times its own worst enemy: it’s all a bit too neat, too much like playwriting by numbers, even down to its final message. Despite its emotional punch, you sometimes wish the play was rougher and less controlled. It needs some more sweat stains.

Sweat premiered in New York in 2015, and this revival triumphantly transfers to the West End from the Donmar Warehouse, where it opened in December last year. Lynette Linton directs with deep understanding and immaculate pacing. On designer Frankie Bradshaw’s detailed set, in which the bar is overhung with industrial chains and pulleys, a crack cast deliver superb performances. Clare Perkins (Cynthia) and Martha Plimpton (Tracey) are utterly convincing as best friends turned enemies, while Osy Ikhile (Chris) and Patrick Gibson (Jason) follow a similar arc. Stuart McQuarrie is the friendly barman Stan, Leanne Best the vulnerable Jessie, and Wil Johnson the defeated Brucie. The whole cast make sure that, at its best, Sweat not only makes you perspire, but also cry.