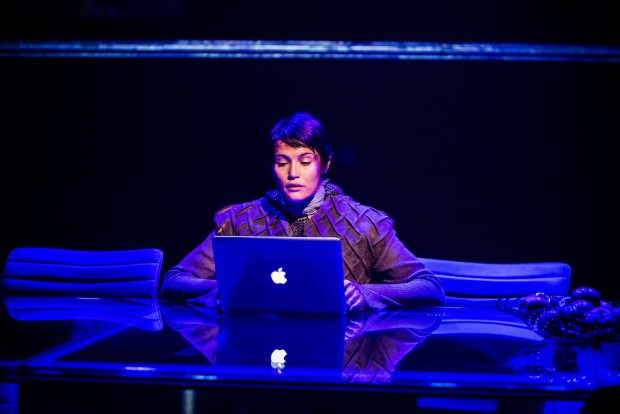 How’s this for a Christmas-week story? Joan, a young peasant girl — played in this version by the charismatically attractive Gemma Arterton — grows up in the bleak French countryside. She hears voices. It’s 1429, and they tell her to lift the siege of Orleans and defeat the English invaders. She inspires troops, she inspires the Dauphin. She helps crown him King of France. She is betrayed, captured by the English, tried as a heretic and burnt at the stake. Some 25 years later, the authorities realise that they have made a terrible mistake.

You can easily see why George Bernard Shaw’s play, which was first put on in 1923, soon after Joan’s canonization as a saint, is regarded as a tragedy, albeit a tragedy without villains, since all of the main protagonists behave more or less in good faith. Its full title is Saint Joan: A Chronicle Play in Six Scenes and an Epilogue, and Shaw’s own typically wordy preface includes his vision of the moral of the story: “It is what men do at their best, with good intentions, and what normal men and women find that they must and will do in spite of their intentions.” Yes, there are no winners in this tale.

This modern-dress version of the play, is directed by Josie Rourke and designed by Robert Jones, and starts with Duncan McLean’s video screens proclaiming the Shawism: “Must Christ perish in every age to save those that have no imagination?” and, in tribute to the anniversary of another war, showing the steady fall of red poppy petals. Then we are in the world of Bloomberg and commodities futures, as the screen reports that egg prices are soaring because of an inexplicable shortage (an in-joke about the play, which indeed starts with Joan’s miraculous ability to make hens lay eggs). The story then unfolds through a series of set piece scenes: Joan (the only one in medieval dress) meets the Dauphin, Joan relieves Orleans, the English plot Joan’s downfall, Joan is tried and condemned as a heretic.

Although the play has its Shavian windbag longuers, this mercifully trimmed production radiates with contemporary resonance. Normally, I don’t like overt updates or modern-dress versions of classic drama, but Rourke’s updating is both witty and illuminating. It brings out the latent sexism of the original while reminding us that today’s corporate world is every bit as violent as the medieval one. And I enjoyed the contemporary echoes: first, this is a story about an outsider who galvanizes a nation, making it proud and patriotic again, while also unleashing ugly emotions (echoes of Brexit), and, second, it is also a story about social justice, and individual responsibility. Joan upsets the hierarchical feudal system by insisting that she doesn’t need the church as an intermediary: God speaks to her directly. In her fanaticism, we can hear echoes of any religious fundamentalist. And her trial for heresy, during which she is also accused of witchcraft, clearly shows how some men hate women who succeed. For Joan is a member of the awkward squad, a danger to complacency and routine: one of the charges against her is her transvestitism.

Inevitably Arterton has to carry the weight of all of this on her well-toned shoulders. Luckily, despite her warrior gear, this is a modern-day production so it doesn’t matter that she never looks or acts like a peasant girl. Instead, her performance has the sweet naivety of the well-brought-up young woman whose beliefs inspire her to be goodness incarnate. She is neither boisterous tomboy, nor rough soldier’s mate. She’s semi-angelic. It’s also a very tactile reading: Joan touches the hands, the arms and the faces of her accusers in a genuinely saintly manner, glowing with forgiveness. A mixture of eloquent simplicity and ardent fanaticism, she attracts and repels in equal measure. It’s probably blasphemous to call her acting miraculous, but at some moments it really feels like that.

The rest of the cast (the men) can’t really compete with this radiance, although I liked Fisayo Akinade’s campy Dauphin, Niall Buggy’s aggressive archbishop, Hadley Fraser’s loyal Dunois and Jo Stone-Fewings’s scheming Warwick. Richard Cant, Syrus Lowe, Rory Keenan and Matt Bardock take on a couple of roles each. Amid constant video reminders of Joan’s place in the iconography of the Catholic church, and on a revolving stage, this is a very long, but intellectually fascinating and emotionally moving evening. Despite its contemporary relevance, there may not be a lot of Christmas cheer to be derived from this story, but some crumbs of cold comfort will almost certainly fall into your lap.