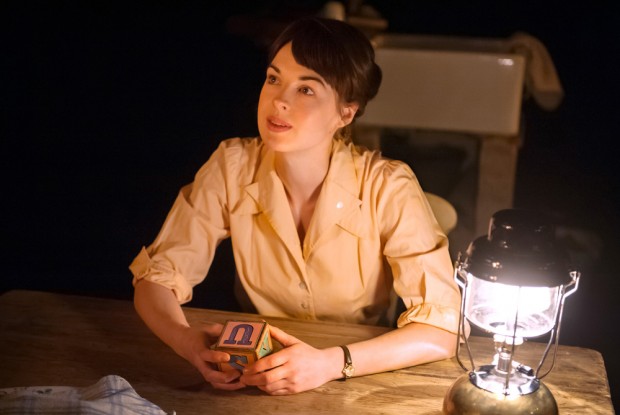 British theatre is obsessed with the new, with novelty. And one of the obvious casualties of this is old plays that are not by Ibsen or Chekhov. And plays that feature in every history of British theatre, such as Arnold Wesker’s 1959 classic, Roots, about the political and sentimental education of Beatie Bryant, with its uplifting final scene of her self-awakening. At last, this revival gives us all the chance to watch a legendary piece of our cultural history.

The second in Wesker’s trilogy about 20th-century society, this version of Roots follows nicely on from the Royal Court’s revival of the first episode, Chicken Soup with Barley, in 2011. In that play, we saw how Ronnie Kahn, the son of a Communist-Jewish East End family, had become disillusioned, and how his mother urged him to discover his capacity to care and to love. Now, in Roots, he is the offstage boyfriend of Beatie, the daughter of a family of Norfolk farm labourers. She has been to London, and has fallen for Ronnie. Now back in rural Norfolk, she tells her family that she has invited him to come to stay. But she is painfully conscious that her newfound metropolitan friend wouldn’t be very impressed by the humble folk who inhabit her home environment. Her father and mother are taciturn hard-working folk, and her sister and brother likewise.

Written in Norfolk dialect, and taking the form of a classic well-made play in the kitchen-sink style, Roots is a family reunion story that stages an exciting range of ideas. It is about labour disputes and trade union representation, about the influence of pop songs and mass culture, about sexual mores (Beatie shocks her sister by telling her about her afternoon, yes afternoon, sex sessions). It is about language and about self-discovery, but also about the sadness of old people dying.

Like Arthur Miller, Wesker writes great parts for women, and he often gives them the last word. He shows how women’s work is never done and how mother and daughter, and the two sisters, are constantly active — it’s the men who sit on their arses. A strong theme is Beatie’s resentment against her parents, and her final conflict with her mother is sharply realised and psychologically convincing.

The evening opens, in James Macdonald’s sterling revival, with the smell of cooked liver, mashed spuds and fresh bread, and domestic routines dominate the action: dishes are cooked, sponges are made, dishes are washed up, the floor is swept and a tin bath is filled. But while showing all this activity was once radical, it now occasionally seems a bit tiresome. What remains highly relevant are the play’s generational struggles and the class conflict.

Although Beatie’s final speech is brilliantly written, it is not a straightforward radical call to arms. Despite her desire to discuss problems with her family, in the end she just browbeats them. Her final speech is one long monologue: it’s socialism in the form of a lecture rather than as cooperation. And, in her self-awakening, Beatie looks forward to the subjective Sixties rather than back at the communist Thirties. Finally, Beatie’s main concern is Beatie.

In general, this production is both humorous and moving. On Hildegard Bechtler’s meticulous set, where you can sniff the shoe polish and blink through the gloom, Macdonald’s cast deliver a splendid mix of character study and cameo. As Beatie, Jessica Raine is at first more persuasive as Ronnie’s ventriloquist dummy than as an abrasive daughter. But she blossoms at the end, and her final scene is brilliant. Linda Basset and Ian Gelder — bitter expressions deluxe — are convincing as her parents. A great play; a great evening.