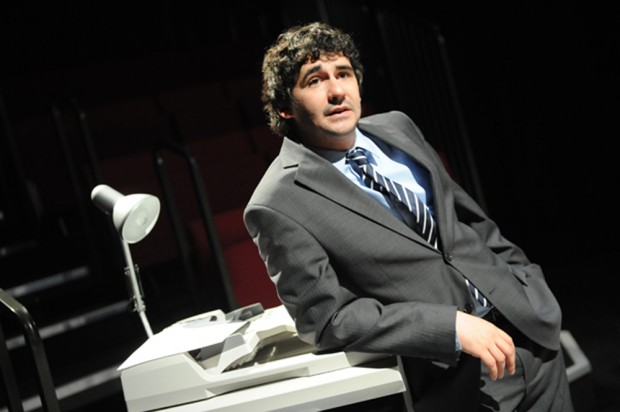 Let’s face it, the rom-com has an image problem. Too often, this genre is tainted by either sugar-sweet sentimentality or crashing cliché, or both. Often, there’s something more than a little oppressive about the whole idea of romance, as if love’s natural idealism is too weak to withstand a cold dose of reality. But there are exceptions. And this show is one of them. It’s great to be able to welcome DC Jackson’s new play, which he calls a “non-rom-com”, and which arrives in London having first enjoyed a successful outing at the Edinburgh Festival in August.

We start off in the land of the office fling. Thirtysomething Tom reaches the end of his first week in a new job in Glasgow, and, at the traditional Friday-night drink, meets Amy, and then goes back to her place. Before either of them knows what’s hit them, this one-night stand has become a relationship. At least, that’s what Tom thinks. Sporting an attitude that will make any man cringe in recognition, Tom believes that Amy is cramping his style.

Yet Tom also oozes confidence that the relationship won’t last. Soon, Amy will get fed up with him and his passive resistance to commitment. Soon, Amy will chuck him. Soon, he will be single again. Is it that he just prefers to be on his own — or is he afraid of the responsibilities of a partnership? Or, is it because he still hasn’t got over Alison Hamilton, with whom he had an ill-fated fling at school? Yes, this young man is still, psychologically speaking, stuck in the playground.

As a mirror image of Tom, Amy sees things differently. She thinks that, soon, Tom will turn into a more mature man. Soon, Tom will shape up. If not, soon, she will be single again. Like Tom, the past weighs heavily on her present. In this case, is it because she still hasn’t got over Calvin Kennedy, with whom she had an ill-fated fling at school? Yes, this young woman is still, psychologically speaking, stuck in adolescence.

DC Jackson’s short play is clever, sparkling with witty dialogue and constant narrative musings; it dashes along, flinging out ideas and one-liners like an alcohol-fuelled singleton out on the lash. A quirky meditation on the way that the past moulds the present, this is both cheery and canny. In place of the standard psychological perception that your parents are responsible for your fuck-ups, Jackson argues that, actually, it’s your first love that colours the rest of your life.

If you think about it, this is not altogether convincing but, hey, with a gloriously funny piece such as this, who cares? With its well-prepared shift in viewpoint halfway through the evening, its dazzlingly confident dialogues and its lovable, familiar characters, this is a wonderfully enjoyable evening. As directed by Lyndsey Turner, this production uses a whole variety of theatrical devices, from puppets to projections, and from fridge magnets to flip charts, to tell its story on Chloe Lamford’s spare set.

As Tom, Iain Robertson is a great mix of breezy boastfulness and screeching embarrassment, while, as Amy, Alison O’Donnell is mouthy, sardonic, incisive and snarling. Doubling up as a dozen other characters, of whom the samba-loving Sasha is the most memorable, Rosalind Sydney is both versatile and amusing. High on its own rashness, its awkwardness, its excess and its deep emotional undertow, this is a play that melts any chill with its throbbing, warm heart.

This review first appeared on The Arts Desk, 25 October 2010