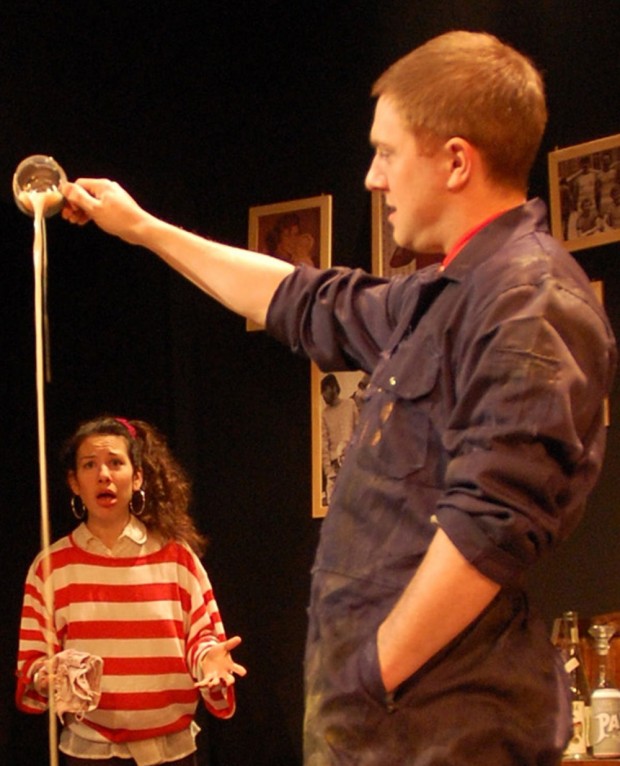 Sexual politics has always been fertile (oops) ground for comedy, and Doug Lucie’s vigorous satire — whose 1984 premiere starred Lindsay Duncan, David Bamber and Kevin Elyot — is here given a revival on the London fringe. We are in Kilburn during the Thatcher era, and the local trendy lefties have turned inward. As thirtysomething Will and his wife Ronee decide to experiment with radical sexual politics, the men’s group that he hosts explores, often hilariously, the subject of sexism and what it might mean to be a New Man.

At the same time, Ronee takes things even further, and finds it more comfortable — and more pleasurable — to spend time in the arms of a lesbian lover than to endure her husband’s ideas of liberation, which inevitably involve kinky threesomes and watching what would nowadays be termed girl-on-girl action. For their friends as well, sexual freedom boils down to selfishness: where sex is concerned, individual lust trumps collective correctness every time.

As so often in his work, Lucie is concerned as much with class as with sex. So when twentysomething Angie, a working-class woman, gets beaten up by her brutish husband Lenny, she takes refuge with Will and Ronee. But Lenny knows where she’s gone and when he turns up, and contemptuously pours tea on Will and Ronee’s shagpile, you just know that things will only get worst. They do, and one of the lessons of the play is that even radical middle-class lefties end up exploiting the workers.

Hypocrisy is often an easy, perhaps too easy target, but there’s an attractive acerbity in Lucie’s tone, and a merciless clear-sightedness in his portrayal of human weaknesses. Written with a fierce wit, Progress is ironic in its title and pretty scathing in its account of how the middle classes simply can’t be trusted with progressive ideas. As the stammering Bruce exclaims, “Politics is a joke.” In retrospect, Lucie’s depiction of this kind of creeping Thatcherisation of bourgeois would-be revolutionaries looks like a prediction of Blairism. New Men pave the way for New Labour.

This revival by Silver Thread Productions is unevenly directed by Stephen Glover. In the first half especially, he struggles to find a good balance between the play’s dark comedy and its serious passions. His young ensemble cast have a variety of strengths, and I was impressed by Richard Crawley’s smooth Will, Victoria Strachan’s bossy Ronee and Lawrence Sheldon’s reptilian Mark. Gordon Ridout’s drunken rant as Oliver is a high point. This is a competent revival of a contemporary classic that whets your appetite for more.