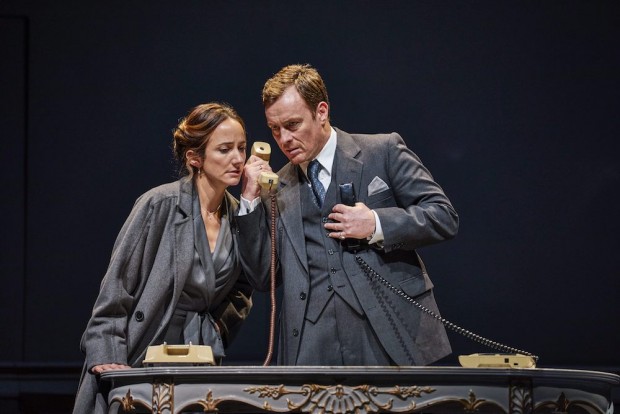 Documentary theatre has a poor reputation. It’s boring in form, boring to look at (all those middle-aged men in suits), and usually only tells you what you already know. It’s journalism without the immediacy of the news. But there are other ways of writing contemporary history. In telling the story of the 1993 Oslo Accords — the first ever agreement between the State of Israel and the Palestine Liberation Organisation — American playwright JT Rogers gets around the disadvantages of documentary theatre by writing what he calls “a scrupulously researched, meticulously written fiction”. And he gets a lot of help from this American production, which visits the National Theatre with a new cast, headed by the charming Toby Stephens.

The story of the Oslo Accords is amazing. In the early 1990s, the official peace talks between Israel and the Palestinians in Washington were bogged down. Because the PLO — at the time broke and in exile in Tunis — was classified as a terrorist organisation, they were excluded and the sheer intractability of the problems of the region meant that no progress could be made. Failure was a no-brainer. Then something totally unexpected happened, a wild card to end all wild cards. A Norwegian academic, Terje Rod-Larsen (Stephens), and his wife Mona Juul, a diplomat, visit the Middle East — and are shocked by the violence of the Intifada; they want to do something to help, to bring peace to the region.

Both idealistic and maverick, Terje and Mona embark on a project to open a secret “back channel” through which top Israeli officials could negotiate with top Palestinian officials to reach a settlement. It’s unofficial, almost illegal and certainly politically suicidal, but they begin to move forward. In a historic manor house located in a forest outside Oslo, they manage to eventually persuade Uri Savir, a top Israeli diplomat, and Ahmed Qurei, the PLO’s finance minister, to meet and hammer out a deal. It’s a complicated process, but the result is the historic handshake between the leaders Yitzhak Rabin and Yasser Arafat on the White House lawn on 13 September 1993.

Rogers tells the story of this exceptional milestone with enormous detail, and a large cast of characters who unsurprisingly spend most of the three-hour running time arguing about the status of the Gaza strip, Jericho and, of course, Jerusalem. Although the prickly question of the settlements gets little mention, and the issue of water supplies even less, this is a reminder that these talks, however fraught, were only designed to chart a roadmap towards peace. Using resonant metaphors — the tragedy of the Intifada is summed by the sight of two teens, an Israeli soldier and a Palestinian rock-thrower, unwillingly facing down each other — Rogers powers through his imaginative and engaging account.

What’s so brilliant is that the playwright stresses that the Norwegian academic Terje was a specialist in analysing conflict who had made an intellectual breakthrough. Seeing how international negotiations frequently got bogged down because the rules were too inflexible (Brexit negotiators take note!), he suggested a different model of talks, in which each single contentious issue is resolved gradually while the participants build up trust. In the top-secret Oslo process, this worked like a dream. For a play, it means that there are numerous moments of drunken levity, sessions of whisky quaffing and waffle snaffling to lighten the mood.

Highlights include the Israeli Savir’s hilarious imitation of PLO leader Yasser Arafat, a crazy description of US diplomat Henry Kissinger’s asshole, and an oblique reference to the EU, which in the context of Brexit feels more than ever relevant. The set-piece joke-telling moments are a hoot. Conflicts with superior civil servants and politicians abound. Rogers cleverly shows how Terje often makes wisecracks which misfire, and how the negotiators have a love-hate relationship with him. He gets mercilessly mocked; at one point even knocked to the ground. His blunders are balanced by Mona’s cool insights and her role argues for the importance of female empathy in international relations.

Oslo is directed by the Lincoln Center’s Bartlett Sher, who staged the play’s Tony-Award-winning premiere in New York in 2016, and brings his team with him: designer Michael Yeargan and projections by 59 Productions. As you’d expect, Stephens plays Terje as a smoothie, a jovial idealist who constantly puts his foot in it, while Lydia Leonard’s Mona patches things up with quiet intelligence. The most memorable performances from a large but pitch-perfect cast are Peter Polycarpou’s thoughtful Qurei and Philip Arditti’s passionate Savir, as well as Yair Jonah Lotan as the sinister Israel lawyer Joel Singer. This is a highly entertaining example of an ambitiously epic play that is informative, compelling and, with its optimistic ending, rather moving. But its success does raise a question: where are the British plays that are equally well written?