The Tragedy of Macbeth, Almeida Theatre 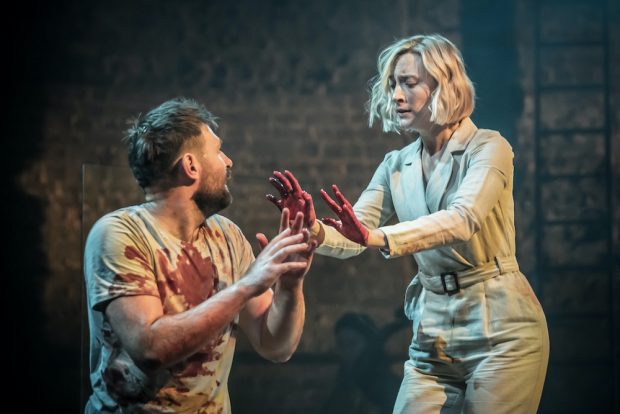 Remembering the months of lockdown, I can’t be the only person to thrill to this play’s opening lines, “When shall we three meet again?”, a phrase evocative enough to be borrowed for the first line of this year’s Wolf Alice album, Blue Weekend. Luckily, I didn’t have to brave thunder, lightning or indeed rain to see Oscar-nominated screen star Saoirse Ronan make her UK stage debut, opposite James McArdle, in this production of my favourite Scottish tragedy, directed by the equally award-laden Yaël Farber. But then the Almeida theatre, led by Rupert Goold, is a magnet for stars.

It has to be said that there’s not much that is Scottish about our first glimpse of Farber’s production. The world of the play is initially more pandemic than highland, with designer Soutra Gilmour’s dark, bare stage occupied by a wheel barrow, a stand pipe, a single light bulb, a wheelchair and an oxygen cylinder. Set in the present day, with vague nods to the Second World War, the opening image is typically vivid: the captain daubs himself with blood, its bright red a savage contrast to the grey setting, while the weird sisters — dressed more like cut-price company executives in matching suits than as witches — hover through the fog of war.

But the minute the characters start to speak we are plunged into Scotland: as a vigorous, but aged Duncan is transported in the wheelchair, taking gulps of oxygen, his thanes come across as big muscular figures, their north-of-the-border accents accentuating a fearsome military presence. Yes, this is a testosterone heavy world, where violence is very close to the surface, and sudden death is life’s constant companion. One thane is executed by a bullet to the head, ISIS or IRA style; brutal murders are terrifyingly vicious. This is Shakespeare for the Netflix generation. Farber also makes a contemporary feminist point: while men act, it is women who have to clean up.

Into this darkness comes an Irish Lady Macbeth. Ronan immediately makes a striking contrast to the surrounding gloom, dressed in light beige, she languidly digests her husband’s news. But although her speeches have the virtue of clarity, her emotional range is narrow, and she lacks a convincing sense of deep dark evil. This Lady M is a power behind her man, but it is a soft power — more Carrie Johnson than Eva Perón. In some passages, such as when she plays a nervous host in a light cocktail dress in the banquet scene, this works well, although here Farber’s use of Vera Lynn feels clichéd — and why must Ronan sleep in her dress when her husband sensibly strips off?

Ah, Macbeth. If it often seems that Ronan couldn’t hurt a fly, McArdle’s tragic hero is a powerhouse, the actor clearly communicating his character’s forcefulness, hesitations, conscience, regrets and finally desperation. In a tremendously nuanced and clear performance, McArdle conveys the complex thoughts of a pell-mell descent into evil. Pity I didn’t feel much of an emotional link between him and her in this story of a couple’s criminality. But ah, McArdle, he stamps his vigorous power on this production: determined in his elimination of his rivals; stricken by the ghost of Banquo; appalled by his growing knowledge of his own vile wickedness, this is a great hard centre to what should be a fast-moving play.

Except that, in Farber’s hands, it really takes its time. Despite her cuts to some scenes, pensioning off the porter at the gate, and making Lady M witness the horrific murder of Lady Macduff and her children, this is a production that manages to add an extra 60 minutes to the story’s usual running time. At three hours, there’s a real sense of directorial indulgence here, despite some powerful visual images: Farber is at her best during the ritual moments, with a prominent ram’s skull and constant melancholy cello playing, by Aoife Burke, while the crepuscular lighting creates a wintery landscape. But it’s often very slow. And it’s when, near the end, the stand pipe fills the playing space with water and the actors start splashing about and shouting too much that I began to seriously weary of the whole experience.

What you remember, however, are the sickening acts of violence, and the air of toxic masculinity that pervades the show. Here male aggression is the embodiment of evil, and that gives Farber’s vision a contemporary resonance. Radiating menace, Ross Anderson’s Banquo — murdered by torchlight — and Emun Elliot’s Macduff, along with the heavy presence of Gareth Kennerley and Adam McNamara (who play several nasties), march their well-booted feet all over the show. To underline the point, there’s a whole wheelbarrow full of big heavy boots, wheeled on early in the evening.

William Gaunt’s fine Duncan, Akiya Henry’s powerful Lady Macduff and Michael Abubakar’s vengeful Malcolm — as well as Emet Yah Khai and K-ets Yah Khai, making their impressive stage debuts as the Macduff kids — all emphasise Farber’s insight that this play is about the importance of family, and that the childlessness of the Macbeths is a vital motivating factor in their crimes. If the best moments include the barbaric splendor of the coronation scene, the patriotic longing for Scotland in the English episode, and the banquet, the final long 30 minutes are hard to forgive. Still, for anyone who wants to see the show, but can’t get a ticket, it is worth noting that it is also streaming live on 27–30 October.