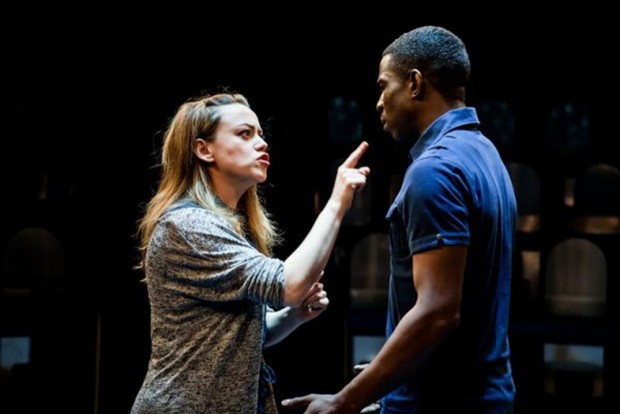 British playwrights have a real knack for writing miniature plays. These are small plays, with small casts, written for small studio spaces. But they often have big themes. Like love. Like death. Like global warming. Duncan Macmillan’s Lungs, produced by Paines Plough and first staged at the Crucible Studio Theatre in 2011, is one of these miniatures, a play that I’d read, but never seen on stage. So finally, I managed to catch up with it — on the night before its latest London run finished.

Part of Paines Plough’s Roundabout Theatre season on the Southbank, there’s a kind of perfect fit between the venue and the show. Roundabout is, in the words of its own publicity, a pop-up-plug-in-and-play theatre, a tent venue that can be transported in a lorry and set up almost anywhere. The playing space is a bare circular surface surrounded by seats like a small circus. It is intimate; if someone whispers on stage everyone in the audience can hear it. So it’s ideal for a miniature play. Also, it’s an eco-friendly venue so it chimes with one of Lungs’s themes, the threat of global warming.

Macmillan’s play begins with an exchange between a thirtysomething couple, M and W, in Ikea. It’s very domestic; it’s instantly recognisable. M suggests that they might try for a baby; W is stunned. Well, she’s more than stunned. She feels as if she’s been punched. The couple discuss the issue. Is this the right time for them to have a child? And, if they do, what are the implications for the future of the planet? In one of those memorable images — which Macmillan manages to make perfectly natural to this couple’s conversation — the carbon footprint of this new inhabitant of planet Earth is assumed to be, says W, “Ten thousand tons of CO2 — that’s the weight of the Eiffel Tower. I’d be giving birth to the Eiffel Tower.”

Of course, these considerations about the environmental impact of having a baby slide neatly into the more general question about whether these two individuals are “good people”. After all, they recycle, they give money to charity, they do fun runs. And, if they are good people, are they immune from the usual problems of couples who decide to have a child: disappointments, tensions, arguments? You can guess the answer, but there’s something so beautifully observed about the dialogues, about the emotional give and take, that the initial effect is gobsmackingly exciting.

But, thinking about this after the show, whose later part is a bit less compelling that its beginning, it feels as if Macmillan’s brilliance of observation is both the show’s best bit, and its worst bit. This acute representation of a couple tends to undercut the politics of the play because realism demands that you acknowledge that nothing an individual can do will change the fate of the planet. So there is not much in the way of activism in this story. Or the hope of change. Likewise, since no couple is perfect, this one comes under strain from despair, exhaustion and infidelity.

Yet Macmillan does a great job in highlighting two powerful emotional truths: one is the sense that, however close, we can never really know what another person is actually thinking. And therefore even the strongest connections between people can be broken. And, secondly, that sexuality is sometimes about aggression, about proving a point. And because the play is not entirely free of cliché, I did worry that some of the emotional exchanges did stride a bit too close to gender stereotype: you know, emotionally expressive woman and tongue-tied man.

Still, these are minor caveats. George Perrin’s direction and Lucy Osborne’s design brilliantly use the playing space of the Roundabout theatre to indicate the emotional distance between M and W, and the show has a strongly felt human dynamic. Sian Reese-Williams and Abdul Salis are both completely convincing, and casting a black actor gave the passages about M’s parents a much more dangerous resonance, adding a touch of racial tension to this love story. Lungs may be a miniature, but it is also edgy, funny, sad and emotionally honest. An almost perfect gem.