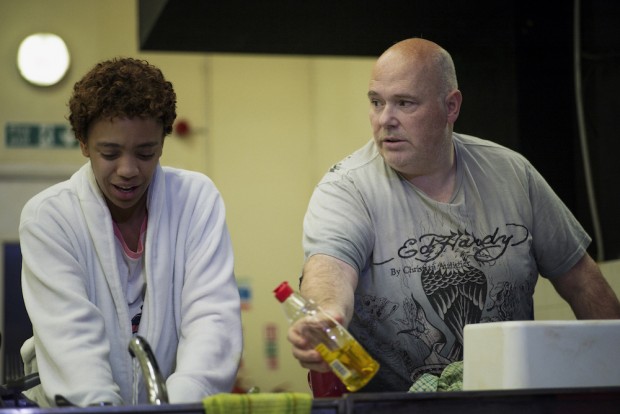 The trouble with political theatre today is that it doesn’t have enough politics. Look at James Graham’s This House (currently at the Garrick Theatre in London’s West End). It’s an account of the parliamentary woes of the Labour government of 1974—79, and it’s all about process: no ideas, no arguments and no politics. But at least it tells a story. The same can’t, alas, be said about Alexander Zeldin’s new play, Love, which has neither story nor politics.

A follow up to his well-reviewed Beyond Caring, this is a devised piece which shows a couple of days in the life of two families in temporary accommodation at Christmas time. The set is the communal area of a hostel used by a local council, so there’s a kitchen, a dining area and a corridor which has the doors of one toilet, and several rooms, allowing glimpses into the cramped single spaces that each family shares. One family, made up of Dean, pregnant Emma and their two kids (Jason and Paige), are squeezed into one tiny room, and in another are the aged Barbara and her carer, her middle-aged unemployed son Colin.

As Dean and Emma struggle to prepare their two kids for school every day, and then do battle with a Kafkaesque welfare bureaucracy (familiar also from Ken Loach’s film I, Daniel Blake), she worries that her new baby, which is due in just a few weeks, will be born in these conditions. And the sight of poverty is pretty awful. Designer Natasha Jenkins’s quietly realistic set has grubby dirt marks on the wall, and you can almost feel the stickiness on the tables in the communal area, and smell the shit from the toilet. And not only is there evidence of physical degradation, but also of psychological strain. The constant frustration of having no money, or very little, and the hassle of banging your head against the walls of the welfare system puts an intolerable strain on these people: they bicker, steal each other’s food, fall out over who owns a cup, snap at each other about who puts their food on which shelf.

Living in close proximity with total strangers, with people you don’t know anything about — Tharwa, a lonely Syrian mother, separated from her kids, and Adnan, a Syrian refugee, drift through the hostel — puts other strains on privacy: you have to wait to use the toilet, which is often left in a horrible state. Dirty tables need to be wiped down. Family meals are rudimentary and involve adults going hungry in order to feed their children. Constant arguments break out; at two points in the 90-minute show there are incidents of acute conflict, both of which are among the most powerful scenes that I have witnessed in London theatre this year. They make you feel terrible. But they do make you feel.

Zeldin’s play is tremendously, even fiercely, atmospheric. It’s experiential, and it makes you feel the frustrations and the agonies of its characters. Yet very little actually happens. At one point, in a moment of great tenderness, Colin washes his mother’s hair, using washing-up liquid. Paige practices for her school’s Nativity play; Jason does a rap; Adnan watches Billy Elliot. Christmas decorations are fixed to the wall. Sporadically amusing, but gradually devastating, the play is a slow burn that draws you in. When, at the end, Barbara moves into the audience, who support her in her frailty, there’s a real sense of communication between spectators and actors.

And maybe this is the main problem with Love. There is so much integrity in this show, and the atmosphere of loneliness, depression, exclusion and desperation is so strong, that we naturally feel for the characters. But, hold on, what about analysis? The play stirs the heart, but what about the head? Where, in fact, are the politics? Most of us don’t need the programme notes to tell us that these people are poor, that they rely on food banks, and that the Conservative-led Coalition government is to blame for austerity measures that have cut welfare payments and imposed draconian sanctions, and which then failed to build enough houses to support the population. We do know that.

So what is the point of this drama, however emotive and powerful? At its best it should inspire people to remember what they know, and maybe do something about it. At its worst, because it has no explicit political ideas, all it does is confirm middle-class audiences in their complacency. At a couple of embarrassing points in the evening, one or two spectators laughed at the sight of poor people eating poor food. How is that funny? Is it just nervous laughter? Or have we all, degraded by poverty porn on reality television, lost any sense of real empathy? I left the show wanting more, wanting more reasons that explain why people end up in this mess, wanting more politics to point towards some way, any way, forward.

Without politics, a play such as Love — which ends on unearned declarations of affection — simply reiterates what we already know. Still, a faultless and utterly committed cast — led by Anna Calder-Marshall (Barbara), Nick Holder (Colin), Luke Clarke (Dean) and Janet Etuk (Emma) — have clearly invested their all, and it shows in their careful and restrained performances, where deep emotions are held in check and terrible pain is buried deep. It’s brilliantly done, but its appeal is to emotion, not to reason. And without reason nothing will ever change.