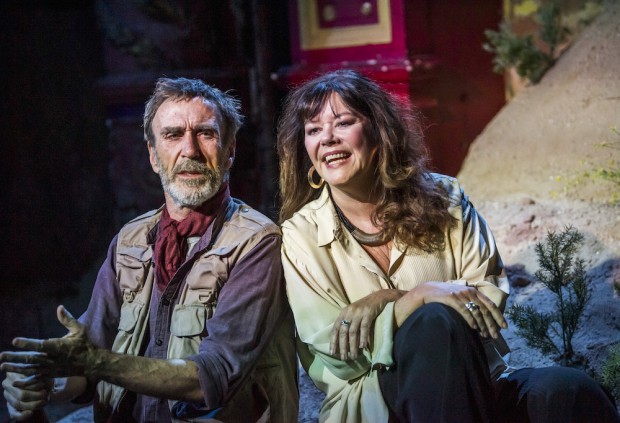 Plays about old age are often also plays about death. This is certainly true of American novelist Don DeLillo’s evocatively titled 2005 play, Love-Lies-Bleeding. What a title: is it love that is prostrate and hemorrhaging? Or is it three plays about a murderous relationship? To find out, read on. But first the writer. Although best known for his novels — especially Libra (1988) and the epic Underworld ten years later — DeLillo has also penned five plays. These are rarely seen in London, and indeed this current show is a British premiere, staged by Jack McNamara, who has directed DeLillo’s other work and has also collaborated before with this fringe venue, whose stage is located in the circle space of a former cinema, giving its productions an atmosphere of battered glory amid the trappings of old, even archaic, architecture.

This sense of faded opulence offers a neat contrast to the spirit of DeLillo’s story, which is set in the great outdoors, the desert lands of the United States’ enormous south-west. On a set, designed by Lily Arnold, which is surrounded by sand drifts and occasionally burns with the bright merciless colours of inescapable heat, Alex is seated in a wheelchair. At the end of his career, he is a land artist who creates massive earthworks in the empty, almost inaccessible spaces of the country, living in isolation after having started out by painting abstract pictures in New York. Following two strokes, he is now in a permanent vegetative state, with a brain which scans show as shrunken, and he is completely dependent on his carer, the much younger Lia, who is his fourth wife.

The drama begins when Toinette (short for Antoinette), his second wife, arrives along with Sean, Alex’s son from his first marriage. They have both decided that it is pointless to wait for the old man to die, and that he needs a helping hand. Lia, however, disagrees. She believes that Alex can hear her when she talks to him, and points out that no one can know what he is thinking and feeling. Toinette and Sean, especially Sean, counter this by arguing that Alex has no quality of life and that a mercy killing would be, well, a mercy to him. After all, he clearly is barely human. And, anyway, Sean has come prepared: he has a medicine bottle full of liquid morphine.

The ethical debate of the play is broken up by speeches in which the characters remember their relationships with Alex, and by brief flashbacks to various incidents before he became immobilized. DeLillo writes, it has to be said, more as a prose stylist than as a master of dramatic dialogue, and the piece has a static quality that makes even its 90 minutes feel quite extended. But it is a rich text, with plenty of philosophical asides and much metaphorical resonance. The title, which at first sight looks like three short scenes from a marriage (with the word “lies” in particular having a double meaning), turns out in fact to be the name of a desert flower, and there are a couple of moments when Alex’s love of reciting the names of such blooms gets an affectionate remembrance.

One flashback, when Toinette, who works as an editor, once visited Alex, leads to a discussion about his art, and of one of his projects: to hollow out a perfectly symmetrical room from the inside of a mountain. This image of a beautiful undecorated rock space, hard and cold, but in the middle of the desert, feels like DeLillo’s suggestive fantasy of the psychology of any artist, alone and impregnable at their core. And, in a vivid moment, Toinette says that, in a mutual game, she once imagined Alex’s death in car crash as a simple smash-up while he elaborated this into a story about a multiple pile-up. It’s a clever comparison between the egoism of the male artist and the practicality of the female lover.

By bringing Sean, Alex’s son, into the story, DeLillo gives us a sense of three of the artist’s four marriages, as well as producing a picture of a spiky, unloved young man whose desire to assist his father’s dying often seems to have a murderous intent. As he begins to administer the morphine, you do wonder how these three expect to get away with an act of euthanasia which is surely both illegal and morally questionable. But DeLillo’s intentions are neither literal nor naturalistic; his key interest here is philosophical. How do we create memories of the past, and when is life really not worth living? Can we ever know how much a person is suffering, and can hi-tech help us master nature?

If DeLillo offers to no answers to the questions he raises, there is an unmistakable elegance to his prose, which is allusive and occasionally haunting: the play begins with Alex’s statement that “I saw a dead man on the subway once”, and his later riff on the phrase “M’illumino d’immenso” is similarly striking. In McNamara’s careful and delicate production, the performances are all very good: Joe McGann and Josie Lawrence as Alex and Tointette are both convincing, suggesting some of the pains of old love, while Jack Wilkinson and Clara Indrani as the younger generation, Sean and Lia, offer a more open embrace of new experiences, she as a caring angel, he as an avenging one. That said, Love-Lies-Bleeding is a hard gem of a play, and one which only occasionally catches the light.