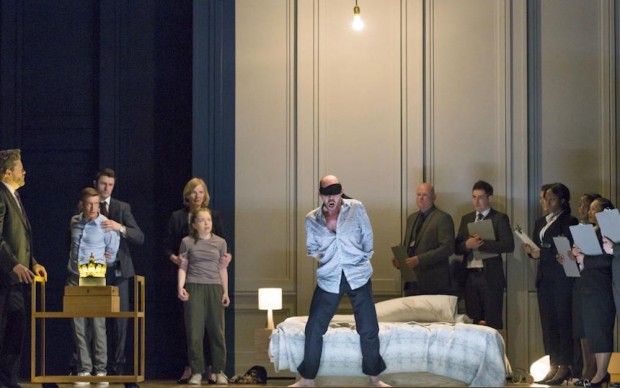 Playwright Martin Crimp began his career by writing surreal short plays that hinted at his love of classical music; he is now experiencing a late-career boost as the creator of texts for George Benjamin’s contemporary operas. Their most recent previous collaboration, Written on Skin in 2012, was a triumphant international success — with Benjamin now being a more frequently staged opera composer than Benjamin Britten. Their new one, a co-production with theatres from five countries, Lessons in Love and Violence has been created by a dream team: music by Benjamin, words by Crimp, staging by Katie Mitchell and design by Vicki Mortimer, plus a starring role for singer Barbara Hannigan.

Written on Skin revisited an old Provençal love story which ends with a woman being forced to eat her dead lover’s heart. Now Benjamin and Crimp have again traveled deep into medieval history, this time — like playwright Christopher Marlowe and filmmaker Derek Jarman before them — telling the story of English king Edward II and the his lover Piers Gaveston. Except that this is not a piece of early 14th-century history, but a powerful contemporary story about leadership, whose central figure is simply called “the King”, and his son “the Boy, later young King”, in a modern-dress production. The atmosphere of this sublimely atmospheric opera is that of a modern fable, a folk tale about the privileges of power, the fluidity of desire and the decisive application of aggression.

At heart, Lessons in Love and Violence is a family drama. The rather ineffectual but aesthetically-minded King is married to Isabel, and the couple have two children, Boy and the younger Girl. But he also has a lover, the royal favourite Gaveston, who is politically active, and feared and hated by the people. As the country experiences economic and social problems, with the twin spectres of famine and revolt stalking the land, another politician, the military-minded Mortimer, accuses the King of acting irresponsibly. Angered by this intervention, the King banishes Mortimer, who then conspires with Isabel to murder, first Gaveston and then the King himself. The crown passes to the Boy, who then deals with Mortimer: he has absorbed his lessons well.

This seven-scene 90-minute retelling of an episode of English history is entirely free of medieval mannerisms or cod olde world language. Instead, the spare but ferociously controlled text explores not only the King’s infatuation with Gaveston, which leads to their lavishly funded private entertainments, expenditures which upset not only the people but the puritanical Mortimer as well, but also the nature of political violence. Typically Crimpian images — a devastated city, fearsome injuries and beautiful moments of poetry — are strung out like jewels along a vigorous story whose intellectual precision feels like a fin de siècle opera from mitteleuropa. As in the text, so in the music there is a Continental feel to the fractured melodic lines, the horn blasts and the modernistic percussion.

The show is studded with memorable moments: at the start, the King insists on his royal authority, but because he is in his underpants he is exposed as weak. At one point, Isabel takes a pearl and, in the face of an incredulous incursion of peasants, dissolves it in a cup of vinegar, telling the poor that she has just destroyed a jewel worth a mansion with 14 rooms. It is a wonderful Marie Antoinette gesture. At another point, the King’s bedchamber becomes an intimate theatre where two women sing David’s lament over the death of Jonathan from the Old Testament. Later, death’s visit is the arrival of a Stranger, who seems oddly familiar. The King’s quarrel and banishment of Mortimer has a Shakespearean edge: it feels as sudden as the scene in Richard II when the King banishes Bolingbroke. Finally, Mortimer teaches the Boy about the application of political violence by executing a madman, who believes himself to be the King.

Mitchell’s remarkably restrained but psychologically acute production conjures clear stage pictures with only occasional passages of slow-motion dream-like movement. Vicki Mortimer’s set — seen from several different angles over the course of the evening — is luxurious and features both twisted artwork by Francis Bacon and a huge domestic aquarium whose fishes are a visual metaphor for the airless lives of the various royals. As you’d expect, Hannigan soars in her virtuoso spirals, while Stéphane Degout (King), Gyula Orendt (Gaveston), Peter Hoare (Mortimer) and Samuel Boden (Boy) are likewise excellent. The result is a deliciously cool, intellectually stimulating and tremendously suggestive reading of a brilliant piece about the politics of power, the confusion of desire and the horror of violence. If love can make us human, so can murder.