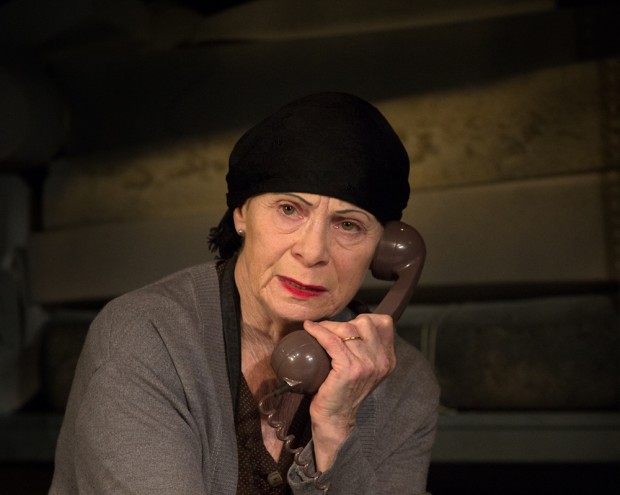 Families are snake pits. Which is just as well because that means that they make ideal subjects for drama. For while happy families resemble the smiley face emoticon, unhappy households are ferocious places in which vicious reptiles hiss, bite, slither, suffocate and swallow one another, each sinking its fangs into the tender parts of the others. Locked together by mutual hate. In Filthy Business, a comic epic, playwright Ryan Craig travels back in time to explore the poisonous and reptilian atmosphere of the Solomon family, the owners of a retail rubber business in North East London. As the title punningly suggests, a family working with rubber is prone to both physical dirtiness and moral corruption.

The chief snake is Yetta Solomon, the Jewish migrant from Eastern Europe who set up the business and is now the aged matriarch of the family. In the teeth of every cliché about Yiddish mothers, she is energetic, entrepreneurial and utterly determined. Having started by pulping rabbit skins, then selling rubber goods on a market stall, she has ducked and dived to create Solomon’s retail rubber, declaring that she swore she would “drag myself up”, “build sumtink of my own”. Now the ruler of an “Empire”, she is a manipulative monster, rude, ruthless and unsentimental, but also enormously funny. Her use of the English language — early on she says that “Latvians don’t buy nuttin from nobody. Browsers every last bastard. May dey all choke on der soup and die.” — is a constant delight, and she could fill a dictionary of quotations all on her own.

Yetta’s two sons live in her huge shadow. Nat, the oldest, has lost one finger, but although he boasts about his capacity to brutalise the company’s opposition, his business decisions are not always sound. His brother, Leo, is his competitor not only in the work of the firm, but also for the attention of their mother. Their rivalry extends to their wives: Carol, Nat’s wife, tries too hard to please, while Eileen, Leo’s Northern Irish spouse, tries too hard to offend. Much of the plot concerns Leo’s bid for independence: can he, as Eileen wants, set up on his own?

This family conflict extends to the younger generation, whose most dynamic member is Mickey, Leo’s son. He makes an alliance with Monty, a machinist, against his cousins Gerard and Berenice, Nat’s children. There are also walk-on parts for Rosa, a black machinist, Vern, a “humper” of materials, as well as the flamboyant Harry Farris, a loss assessor. Starting in the hippie late 1960s, when change is in the air, the plot of this comedy epic spans some 14 years and climaxes in the Thatcherite 1980s. As well as Leo and Mickey’s bids for freedom, there is a till theft and an arson attack on the premises (the “temple to rubber” lovingly created by designer Ashley Martin-Davis), then a love child and constant pressure from Greek competition. At every turn, disaster looms; at every moment, Yetta dominates. And her constant refrain is family values.

If the importance of family is the play’s central theme, Craig shows how this results in untold pain for most of the people involved. This is a story of migrants making sacrifices in order to survive and prosper. As Yetta says, “Everyt’ing I did, I did for dis family. I did outta love.” When Cossacks visited her village during a pogrom, “Dey set dogs on us. I barked back. I barked louder.” To a Nigerian migrant she boasts, “Dis shop is my country — nobuddy fucks mit me in dis shop.” Although this Jewish business is shown as contributing to the British way of life, and with the younger generation actually helping to define it, the costs of assimilation are also clear. Everyone in the play suffers some kind of discrimination.

Filthy Business is by no means perfect. The plot is too intricate for its own good, and there is a constant sense that Craig is cramming too much into every important scene. The play’s epic scope is impressive, but the number of subplots less so. The question of who started the fire that burnt down the business is vital, but the consequences of Leo’s extramarital fling is not. Monty’s attraction to Berenice, Mickey’s sexuality and the scene when Rosa is confronted by her husband could all have been cut. The moments that really sing, in Edward Hall’s sprawling production, all feature Yetta, brilliantly played by Sara Kestelman in an outstanding performance. It is she who makes this play worth watching. The rest of the cast, especially Louis Hilyer (Nat), Dorian Lough (Leo), Callum Woodhouse (Mickey) and Callie Cooke (Bernice), are good, but it is Kestelman’s show: she captures all of Yetta’s spitfire quickness, colossal self-belief and cruel wit. She turns filth into gold.