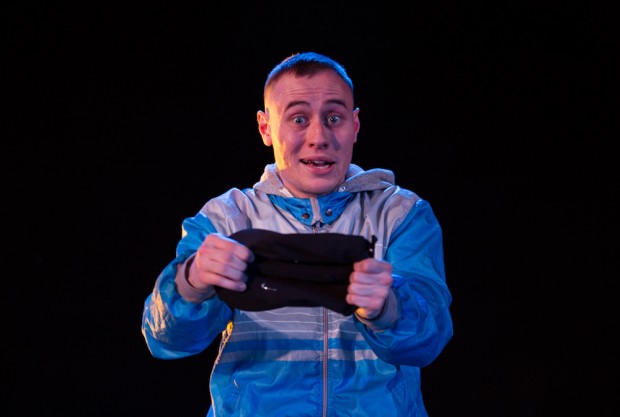 Is Britain’s welfare system unfit for purpose? Well, all the news channels seem to suggest that it’s collapsing, and Niall Ransome’s debut, a short but strong new solo play, with its screaming title FCUK’D, is in complete agreement. When welfare doesn’t care, it’s individual families that suffer, and this monologue shows what happens to a specific Hull family. Their sad story is told by Boy, whose father has abandoned home, and whose mother has drink and depression problems, and is unable to care for him or his younger brother, Matty. Boy, who is an older teen, looks after his much younger brother, collecting him from school and helping to feed him. It is a picture of self-help care.

When social workers, driving in a big swanky car, visit and threaten to take Matty away, Boy decides to grab matters into his own hands. He comes to the conclusion that the only way that they can stay together is to leave home. So he and Matty do a runner. But with no money, and few resources, the brothers suffer not only the freezing rain of late December, but also the contrast between their condition and that of the happy Christmas festivities taking place all around them. Then they come across a car, with its doors unlocked and the keys in the ignition. You can guess what happens next.

Ransome (a member of the super-successful Mischief Theatre, the company behind West End hits like The Play That Goes Wrong) has written this hour-long drama in occasionally rhyming verse and also directs the show. It’s a very impressionistic piece, evoking a northern England that is impoverished and desolate. As Boy and Matty cross this decayed urban landscape, it seems as if we are experiencing their world through rain-spattered specs, and seeing — through a misty veil — the rusting supermarket trolleys, dumped fridges and, with pungent irony, “flags that remind us of why Britain is so great”. Yes, this is Brexit Britain alright.

In his blue rainproof top, grey hoody and cap, Boy is a bundle of nervous energy, constantly itching to go, to move, to make things happen. Although he can be tender towards Matty, affectionately calling him “you little shit”, and quite caring, he is also on the edge, with a streak of violence never far from the surface. Inside, he is boiling with anger, and occasionally he blows. Appalled not only by the collapse of his family, but also by the injustice of the world, the failures of social care and of parental responsibility, he is a danger to himself and to all around him. He is also in despair, and desperate, a combination that leads inexorably, and depressingly, towards self-destruction. As he tells his kid brother, it is a case of “The world versus me and you.”

Before the play’s chilling ending, which is delivered like a series of hammer blows to the senses, there are moments of cracked poetry, as when Boy embraces the pouring rain, recalling his mother’s description of it as “angel’s tears”, and hoping it will symbolically, almost religiously, cleanse them both of the shit of the world. Likewise, his memory of his nasty reaction to a little girl singing beautifully, angelically, at school is an excruciating incident that reveals just how troubled he is. The tragedy is that Boy is well aware of what angels are, and what they can do, but instinctively rebels against them, preferring to be hated — and not to care. That way, he avoids pain.

Ransome’s powerful production is designed by Grace Venning, who uses one stunted lamppost and a segment of an astroturf pitch to suggest urban degradation, and provides two piles of rather sad leaves for one of few passages of fun. Haunting music comes from Peter Wilson, but the main impact of the show is carried by actor Will Mytum, who is simply riveting. When talking about his younger brother, he almost beams with pleasure, but his hatred of anyone who he feels is better than him is always on tap. Agitated and edgy, he storms around the set, setting it on fire with his resentment and his rage. Visibly alienated from the world of mainstream work, he is a social problem in human form. It’s a performance you’d run a mile from if you met it under a dark bridge on a rainy night.

However striking, FCUK’D can be a bit overwrought at times, and although it’s great to hear Hull accents on a London stage, I’m not sure if the writing is totally consistent as a realistic picture of a Yorkshire youth. Middle-class audiences always want their working-class characters to have a good heart and to need help. That said, the observational details of Hull life — women in pink dressing gowns having a fag, kids kicking a dead pigeon down the road — feel authentic, and Mytum’s fierce and frantic performance is strong enough to stamp on any doubts. You leave the theatre both moved and troubled. Very troubled.