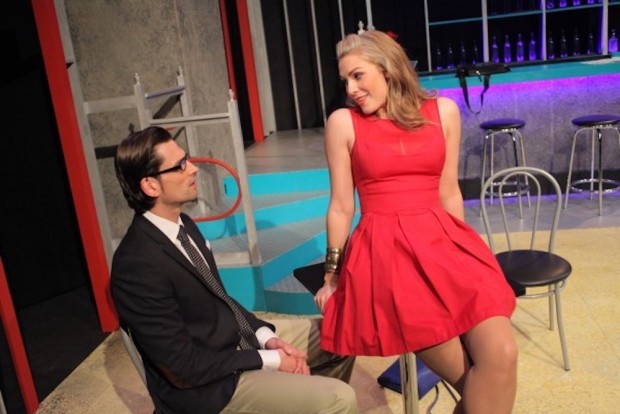 Love, and falling in love, discourages thought. When you’re experiencing such powerful emotions, rational ideas not only fly out of the window, they also take a trip around the block, buying a newspaper and a pint of milk along the way. In this case, as Rob Young’s Ex, a play with songs, suggests, all you can do is sing your heart out.

Ruby and her ex-boyfriend Jack meet in a bar three years after they split up. Their feelings are still raw and, despite having new partners, they find that they are still attracted to each other, despite all the usual recriminations. But when Ruby reveals that she is about to emigrate to the USA with Keith, her fabulously attractive American new man, it looks like decision time.

Bad boy Jack, who is now dating the drop-dead gorgeous Claire, can either persuade Ruby to stay and to start again, or let her go. Ruby can either decide to follow her heart and stay with Jack, who is basically a loser, or fly into a thousand sunsets with Keith, who is handsome, successful and perfect. To complicate matters further, when Keith and Claire meet, they are attracted to each other.

With its nod to Noël Coward’s Private Lives, Ex could be a lively, dirty, smart and touching portrait of modern love. But it isn’t. The main problem is twofold: the show is as bad about making up its mind as its main characters, and its songs are unmemorable and uninspiring, with some really cringe-making lyrics.

The first half, which is mainly about Jack, a slob and unfaithful lover, and Ruby, a northern lass burdened with low self-esteem, stumbles along like a mildly drunken sketch show. Its main point is that relationships are never really over, and that meeting your ex can be fraught and emotionally disturbing. This truism is dressed up with a handful of awful songs which would be risable if they weren’t so painful to listen to.

Things heat up a bit in the second half, with the appearance of Claire and Keith, whose glamour ups the stakes in Jack and Ruby’s relationship. Now the main point is the question of why are nice women attracted to bad boys? As one of the songs puts it: “Women don’t want perfect, they want a project.” Both Ruby and Claire are challenged on their ability, or not, to be able to change Jack. As if he was worth it. If this kind of sexual politics is a bit old-fashioned, there are some good moments when Claire asserts a woman’s right to tell the truth about men, while Jack responds with his much cruder view of life.

Likewise, there are some insights in the way that the cross-cultural attitudes of the Brits and the Americans are represented: the sunny optimism of America clashing with good old British miserabilism. I did manage a few laughs amid the dire dialogues and even more dire songs. Yet despite its insights, this show can never really make up its mind, and seems as indecisive as its protagonists. The result is neither charming, nor perceptive. In fact, it’s annoying and soul-sapping. Even the bitter-sweet ending, with its stoical assertion of “no regrets” and its belated discovery of self-worth, can’t eradicate the suspicion that the evening has no vision of change and no real idea of contemporary sexual politics.

Neither Young’s writing, nor Ross Lorraine’s music, nor Alex Marker’s design, nor Tricia Thorns’s direction, can offer more than palliative care for broken hearts, despite some good work from the cast: Amy Booth-Steel (Ruby) and Gerard Carey (Jack) contrasting nicely with Siobhan Dillon (Claire) and Simon Thomas (Keith). So unless you really want to follow your heart, right off the edge of a cliff, you would do well to stay away from this Soho bar.