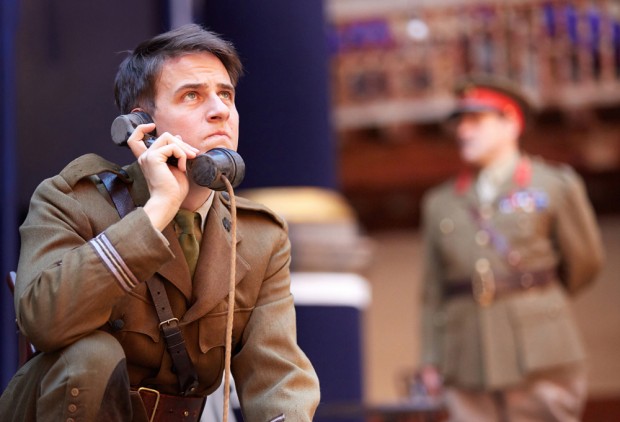 The number of plays commemorating the outbreak of the First World War continues to grow, with some already falling casualty to critical fire or to rapidly waning audience interest. Taking the field rather late in the day, and putting his head above the parapet this week is veteran playwright Howard Brenton, who has had enormous success at this venue with the much-revived Anne Boleyn. His take on the subject of the Great War is a beautifully eccentric one, and tells the story of one man’s war against war.

The story focuses on 19-year-old Jack Twigg, an Oxford student from a humble background who patriotically enlists in the London Irish Regiment. At the start of the play, we see him at the Ritz in the company of Lord Ralph Dulwich, a fellow student from a much more privileged background. The quintessential English subject of class is explored through good-natured jokes and Jack enjoys a night of revelatory sex with the Hon Penny Wedgewood, a classy young lady who later becomes a volunteer.

But while Jack is soon promoted to the rank of Captain, Ralph is passed over, and the scene shifts to the Battle of Loos in 1915. The horrors of trench warfare are lightly sketched out, and the effects of gas and shrapnel memorably described. Jack is badly wounded in the face and shipped back to England, where he comes under the care of Doctor Harold Gillies, a pioneer of reconstructive surgery. The details of skin grafts and innovative plastic surgery he receives have a grim fascination, and Jack slowly begins to get better.

In the wards, which are peopled by hundreds of men with bandaged faces — evoked by a handful in this production — the nights are enlivened by visits from the mysterious figure of Doctor Scroggy. Dressed like a caricature Scotsman, he brings champagne for the wounded to drink — to the dismay of the nursing staff. But who is he? As the answer emerges, as slowly as the reconstructed faces of his patients, it becomes clear that medicine is dealing as much with hearts and minds as with physical injuries. As a metaphor, Scroggy strides through the second half of the play like a beacon of humane care — and of hope for the future.

At his best, Brenton has a lightness of touch that is appealing in such an epic story and the moments when his humour is darkest are those when he most critical of war. There are some good jokes about class — “Mutilation is a great leveller” — and Penny is allowed a heartfelt criticism of male attitudes to fighting. Unsurprisingly, the bad news is that war continues because enough men enjoy the thrill of it, the fear of it, the fact that they feel it in their balls. So much for the war to end all wars.

Brenton has the good sense to occasionally borrow from the best masters, such as Bertolt Brecht or Joan Littlewood, but there remain some things that don’t really work. The romance between Jack and Penny is unconvincing, and the argument against using national identity as a reason for patriotism is a clumsy one. But there are many other things to enjoy: the bickering generals French and Haig, the royal visit and the patients’ drag show, as well as the surreal absurdism of war.

John Dove’s production is pacy and entertaining, even if much of the material will be familiar to anyone who knows about the First World War. Brenton’s neatly eccentric passages, mainly to do with his portrait of Gillies, are a joy, and the large cast is great. Will Featherstone and Joe Jameson provide a good contrast as Jack and Ralph, while James Garnon is an excellent Gillies and Catherine Bailey is an attractive Penny. At this venue, this is a balmy evening of fun that also occasionally makes you think.