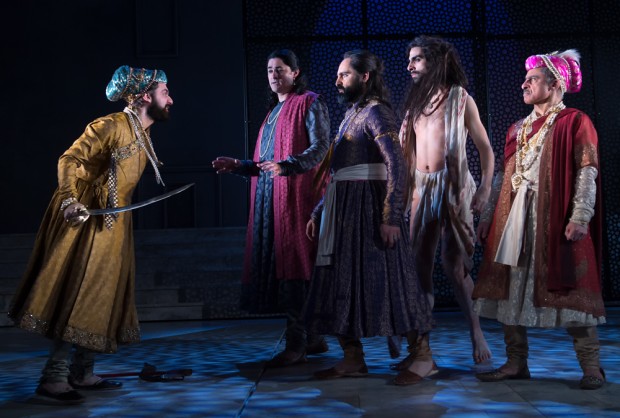 The history play has roots that go deep into our culture. We love to see stories that are kitted out in fancy dress, and long to savour a past that resonates with our present. In the case of Dara, which is adapted by Tanya Ronder from an original by Shahid Nadeem first performed five years ago by Ajoka Theatre in Pakistan, we time-travel back to Mughal India in the mid-17th century to confront once again the problem of militant Islam. But is there more here than contemporary issues clothed in colourful garb?

At the play’s heart is a family drama. In the 1650s, at the imperial court of India two brothers fight to succeed to the Peacock Throne. One, Dara, is popular with the masses and is his father’s favourite: he is inspired by Sufi Islam (which means he loves poetry and is interested in other religions). The other, Aurangzeb, is puritanically Islamist (which means he wants Sharia law and hates other religions). So sibling rivalry is infused with ideology.

The other main players are their two sisters. The eldest, Jahanara, who sides with Dara, and the youngest, Roshanara, who prefers Aurangzeb. The father of this brood is Shah Jahan, who loses control of his empire and is imprisoned by Aurangzeb. Add to this domestic scrap a host of other characters, including eunuchs, mullahs, faqirs, dancing girls, slave girls, ladies in waiting, beggars, warriors, guards and executioners, and you have a sense of this epic tale.

What’s it like to watch? Well, through a haze of billowing smoke, you can glimpse men and women in fabulous bejewelled robes, while religious sufis dance nearly naked and sweet melodies rise from the stage. Through fine gauzes, under Mughal arches, servants clear a path for potentates of a huge empire, while the scent of spices is suggested by lighting that evokes both the deepest darkness and the brightest noon. Fires blaze; gates open. It’s almost like a opium dream.

The main problem is that although the story of Aurangzeb’s triumph over Dara may be as familiar to many in India and Pakistan as the story of Henry VIII and his six wives is to us, for those who haven’t spent time studying the programme of this show the first few scenes are pretty heavy-going, packed with clumsy but necessary exposition. The constant flashbacks only serve to muddy the stream and things don’t really improve until the trial scene at the end of Act One.

Suddenly, the drama springs to life. Aurangzeb, who is a better soldier than his brother, captures Dara and puts him on trial for apostasy. In a Sharia court, Dara faces his accusers with immense eloquence and passion. His belief in tolerance and his respect for other faiths puts him on a collision course with the strict Aurangzeb and his mullahs. In a scene which reminds me of the trials of Galileo or Thomas More, Dara’s open-mindedness is broken on the rock of fundamentalist intolerance. In Zubin Varla’s hands, he grows into a genuinely tragic figure.

Nadia Fall’s production is very atmospheric, and she directs this scene with particular force, but in the end atmosphere is a poor substitute for clear and concise storytelling. Tanya Ronder’s text is meandering, and its language is thin, as dry as a riverbed in a drought. At times, I had the feeling that months of research had buried the drama. On the other hand, it’s hard to find fault with a large and multiracial cast — with Sargon Yelda (Aurangzeb), Nathalie Armin (Jahanara), Anneika Rose (Roshanara) and Chook Sibtain (head eunuch) all doing good work.

But the pleasures of the story, and the vividness of the production, couldn’t distract me from the fact that the second half lacks focus and seems merely to recapitulate what we have already heard. The structure of the piece doesn’t serve the narrative, resulting in unnecessary confusion. There’s no sense, either, of the theatre traditions of Pakistan. Nevertheless, I was glad to listen to stories of the building of the Taj Mahal, the use of a sick elephant to humiliate an opponent, and the parable of the tiger and the goat. But it’s surely a bad sign that I prefer the idea of the play to the experience of actually watching it.