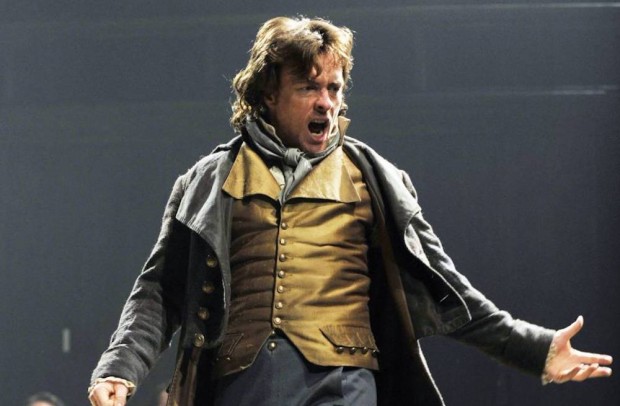 Plays about the French Revolution always pack a strong political charge. After all, this experiment in creating a new world exerts an uncanny fascination over anyone who might wish to live in fairer society. In Danton’s Death, written in 1835 by German radical Georg Büchner when he was just 21, the passion, fury and bloodlust of the revolution are given free rein — as are the arguments for and against political violence. And, as if you’d need any other reason to see it, this revival stars Toby Stephens, an actor who specializes in spies, radicals and bad boys.

Translated by Howard Brenton, formerly a firebrand and now a slow-smouldering liberal, this version is beautifully clear and concise, taking just two hours of stage time to tell a story that rambles quite a bit in the original. Focusing on the moment in 1794 when the revolution began to consume its own children, the play examines the conflict between the hedonistic populist Danton and the austere fanatic Robespierre.

As played with his customary gusto and charisma by Toby Stephens, Danton comes across as a larger-than-life revolutionary hero who seems to have contracted a very romantic death wish. Like Büchner himself, who died a couple of years after writing the play, Danton is both a confident character who spits in the face of the inevitable, and a man who seems to long for the sweet rest of endless night.

Burdened by guilt for his part in the notoriously bloody September massacres of 1792, Danton is an instinctive revolutionary who believes in grabbing handfuls of all the good things in life, whether they are women or wine. Having risked his life by fighting for a cause, he now wants to enjoy the fruits of rebellion: his slogan is champagne and whores for all. It’s a hedonistic (and sexist) sense of rebellion that found its echoes in the hippie radicals of 1968.

By contrast, Robespierre is the revolution’s ultimate terrorist, living in utter self-denial and austerity, and killing opponents for the sake of an idea, without passion but with a steely intent. Along with the young Saint-Just, he represents a radicalism that devours anyone who can’t keep up with the frantic pace of change: believing in an absolute conception of a new humanity, these men have no patience with moderates or, indeed, with anyone who disagrees with them. They are political absolutists. And a restatement of how fanatics can hijack a political movement (any resemblance to today’s Islamists must be coincidental).

The tragedy is that the more the radicals want to change society, the greater the mountain of corpses that pile up. What Büchner doesn’t show is that the revolution also soon dispatched Robespierre and Saint-Just, as well as thousands of others. In the end, it is the arrival of Napoleon Bonaparte that finally brings stability, but no social justice. Ever since, it has proved well-nigh impossible to reconcile the passion for dramatic social change with the desire for personal freedom.

In Michael Grandage’s well designed (by Christopher Oram) and pacy production, with its shafts of light playing across a grey chamber that represents a lodging, brothel, political assembly, courtroom and finally dungeon, this is a compelling evening. Stephens is joined by Elliot Levey, who brings to Robespierre a cool majesty, and Alec Newman as Saint-Just. With a host of other characters joining in the debates and discussions, this play is a reminder of both the thrill and the tragedy of great historical moments when neither side is either completely right nor thoroughly wrong, and when the guillotine — here deployed with sickening realism — throws a huge shadow over subsequent centuries.