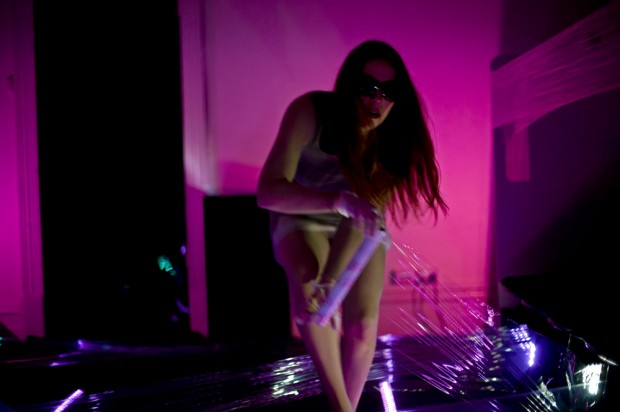 In theatre, total darkness is scary. When all the lights are cut, I immediately begin to feel anxious, and this feeling just grows and grows. If I can’t see anything at all, I feel increasingly vulnerable: what if something falls on my head? Will the actor hit me in the face? Can I trust my fellow audience members to sit still? In absolute darkness my hearing seems to be be more sensitive — I listen for quickening breathing, footsteps and movements. I swear that I can hear the walls creak, and feel the floor vibrate. Yes, that louder noise is a train passing close by…

Cut is a one-woman show written by Australian playwright Duncan Graham, who also directs. Composed in London, it has been a hit at the Adelaide Festival and in Edinburgh last year, and now visits the capital. Deep in the Vaults Theatre, in a room where a traverse stage cuts across a white-walled rectangular space (designed by Becky-Dee Trevenen and with a lighting and control system built from scratch by Sam Hopkins), a story about a women being stalked by a man slowly unfolds. Actor Hannah Norris welcomes us into the space, warns us about the frequent blackouts to come, tells us to use the panic word “cut!” if we have to leave quickly, and then makes us hide all light sources, from mobile phones to wrist watches.

Total darkness! At first, Woman narrates a scene in the black night of sightlessness, and it’s like radio: you imagine the story in your head, visualises the characters and the sets. Then the lights come on, and she is a flight attendant on board a plane, with the runway of floor-level lights both representing the aircraft and the airport. Then it happens. She spots a passenger taking an unhealthy interest in her. The tension rises. Then she’s on a train, and the same man, is following her. The tension rises some more. Finally, she makes it to her home, and guess who arrives at her door? Tense, tense, tense — violence!

“Let us begin. Let us begin in the dark.” What makes this 60-minute monologue scary is the fact that the room is repeatedly plunged into total darkness, while noir film music or an industrial roar pounds the eardrums. The darkness is intense and unsettling, which is more than can be said for the story, which is fragmentary and perfunctory. Graham explores the situation through short incidents as well as accounts of dreams, but his writing is often pretentious: the programme note says that the play was inspired by the ancient Greek Fates, and that the title comes from Atropos, the cutter of the thread of life. At its best — in the incident where a goldfish is tortured — it has a certain sadistic brio, but the main text is underdeveloped and doesn’t allow enough time for us to empathise with Woman. In her black dress and blue surgical gloves, Norris calmly narrates the incidents and her electronically amplified voice rises in tone as her anxiety increases. Occasionally popping on a pair of sunglasses, she appears in front of a black mirror, uses a torch to light her face in the half-dark and stretches cling-film across the stage. Her bright voice has a mild Australian accent, and her calm affectless demeanour makes a good contrast with the horrors she talks about.

Some of the staging is quite memorable, especially the bit with the cling film. But although the psychology of anxiety is powerful conveyed at times, there’s a lack of threat and the absence of drama compromises the story. And, despite the fact that this part-installation and part-theatre-poem is a good idea, there is little chance for genuine emotional engagement in this all-too-brief and thinly written piece.

A shorter version of this review first appeared in The Stage.