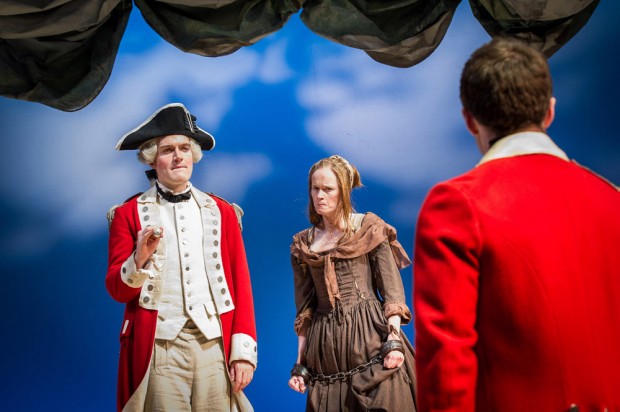 Plays about plays are often touched by theatrical magic. This is certainly the case with Timberlake Wertenbaker’s masterpiece, first staged in 1988, and now revived by the same director, Max Stafford-Clark, who originally eased it into the world. And, just as a quarter of a century ago the play felt like a protest against the moronic anti-arts prejudices of the Thatcher gang, so today it once again asserts the power of theatre as against the crippled vision of Arts Council cuts. Although Stafford-Clark’s Out of Joint company was a victim of arts cuts in 2011 — when its subsidy was cut by more than 25 per cent — this revival is a cogent two fingers up at both government and Arts Council. It is also a clear and emotionally strong reading of a contemporary classic.

Set in Sydney Cove, New South Wales, in 1788-9, shortly after the arrival of the first transported convicts, the play tells the story of the penal colony’s governor, Captain Arthur Phillip, who believes that art has the power to reform criminal behaviour and decides to stage George Farquhar’s The Recruiting Officer using the convicts as actors. Based on the Thomas Keneally novel, The Playmaker, Our Country’s Good has several plots and subplots: the officers disagree about the usefulness of the project, Lieutenant Ralph Clark falls in love with the convict Mary Brenham, old Harry Brewer has a relationship with young Duckling, and convict Liz Morden is almost suicidal in her resistance to authority. The transported men are a mixed bunch: Freeman the Irish hangman, Sideway the flamboyant pickpocket, Wisehammer the intellectual Jew, Arscott the hardened criminal and the black convict Caesar. Amid much comedy as they learn their lines, the drama ends on a note of redemption when some of them discover the power of theatre.

Before that, there are whippings and hangings, and the big themes of justice, punishment and redemption are mustered as Wertenbaker delivers her clear-sighted verdict: injustice is more common than justice; savage punishment just creates more savagery; redemption is born of love. Her skill lies in making these ideas seem the natural offspring of the prisoners’ experience. And if her account of the transformative power of theatre is frankly idealistic, it earns most of its golden glow by means of carefully constructed and beautifully written scenes.

While the big set pieces — when the officers discuss the play and when the cast rehearse it — cover a lot of ground, some of my favourite moments are the smaller scenes with their shiny slivers of insight. Mary and Dabby suddenly come alive when they discover the art of acting, and their contrary natures tell us lots about female friendship. Duckling’s monologue over the dying Harry reveals how she punished him through silence. Liz is measured up for execution, a grim indictment of capital punishment. And when Wisehammer and Mary discuss words and their meanings, you feel the playwright’s delight in the comedy.

Stafford-Clark’s sterling production is warm, appealing and light on its feet. Tim Shortall’s set — with its wooden platform, painted backcloths and barred doors — evokes the 18th-century world, and the merciless sun and dusty atmosphere provide the Australian context. The ensemble cast — featuring Helen Bradbury as Dabby, Kathryn O’Reilly as Liz and Laura Dos Santos as Mary — are all good and double up as at least two characters each, regardless of gender. There are fine contrasts between Ian Redford, who tackles four parts including Harry, and Dominic Thorburn as the callow Ralph. Lisa Kerr’s Duckling, Damola Adelaja’s Black Caesar, Matthew Needham’s Sideway and John Hollingworth’s Wisehammer are all excellent. Our Country’s Good not only talks about the magic of theatre, but with this moving and entertaining production it triumphantly proves it.