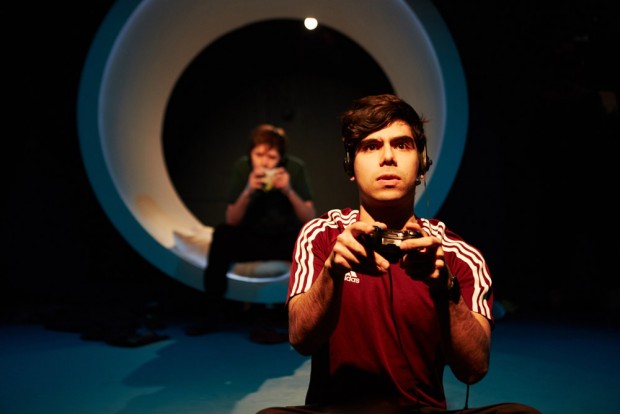 The Syrian Civil War has cast such a dark shadow over the news for the past five years that it’s difficult to remember back to the year 2011, the era of the Arab Spring, which seemed to be such an optimistic time, when, amid much rejoicing, dictators were being toppled all over the Middle East. Lucinda Burnett’s new play, Correspondence, opens with snatches from a series of news reports that take us back to those heady days of revolt and revolution. Before the reaction kicked in. Before the blood really began to flow. Before the numbers of refugees got critical. A springtime of nations indeed.

The opening image of the drama is two teenage boys playing on their Xboxes. They are several thousand miles apart, with Ben in Stockport and Jibreel in Derra, Syria. At first, their main interests are Call of Duty: Modern Warfare and Katy Perry, but because Ben edits his school newspaper he becomes increasingly interested in the events of the Arab Spring in Syria. When Jibreel disappears from view, Ben thinks he may have been arrested and decides to make the trip to Derra to find him. Joining him on this dangerous adventure is Harriet, a mouthy teen from his school.

Ben and Harriet make an odd couple: he is middle-class, the son of divorced parents and a rather geeky, introspective and hyperactive teen, while she is working class, already a hard-drinking and outgoing clubber, living with a single parent, Bob. Her nickname for him is “shit biscuit”. Charming. The first strain on our credulity in this play is that they would team up under any circumstances; the second is that they would make the journey to Syria. Is it really that easy for 16-year-olds to travel across Europe to the Middle East? When they get there, Harriet finds that she has something in common with Jibreel: both of them are less interested in politics than in having fun, and Jibreel dreams of coming to London to study and get laid. Then Burnett turns the whole play on its head by introducing an attack of psychosis, and making the story one about mental health rather than political revolt. (This is not a spoiler: the programme note makes this change of direction clear.) The main result of stuffing a 90-minute play with so many different themes is that it all feels a bit superficial.

This is a pity because the premise of the opener, that teens in Britain and teens in Syria might have a lot in common — annoying parents, stressful exams and an uncertain future — is potentially interesting. Unfortunately this relationship, or correspondence, between the boys gets quickly lost in overcomplicated plotting. On the other hand, while the relationship between Ben and Harriet seems unlikely, Burnett’s portrayal of Ben’s parents, the anxious Fran and the laidback David, has a real tang of truth. The best part of the play is the dialogues between them, which have a satirical slant, and when they talk to Ben.

But the play never really explores the relative situations of its two main protagonists, Ben and Jibreel. Are they both rebels without a cause? Do they both feel stifled by their parents and their provincial towns? Can you really compare a Stockport teen with a Syrian boy? How exactly do both react to a hostile outside world, to a world that seems to be spiraling out of control? So many questions. Alas, the play is too slim to provide an answer.

Blythe Stewart’s fluid production has good performances from its entire cast: Joe Attewell’s troubled Ben and Ali Ariaie’s happy-go-lucky Jibreel; Jill McAusland’s feisty Harriet; Joanna Croll and Mark Extance’s tensed-up parents. The staging, designed by Bethany Wells, features a large white circle which houses Ben and symbolises his claustrophobic detachment from the world. With their headsets and Xbox controls, both teens are happy to shoot thousands of people in the unreal life of the video game, but a short but loud burst of real gunfire during a demonstration is enough to remind us of the difference between digital reality and the other kind. Although only sporadically funny and only occasionally sharp, Correspondence is not without interest. But, like the Arab Spring itself, it is greater in its potential than in its realisation.