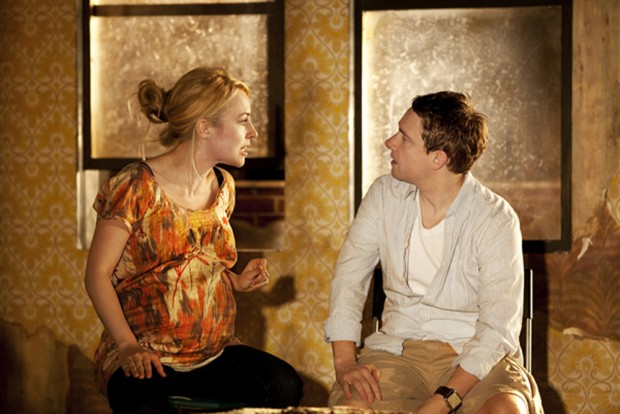 The American Dream is a great subject for theatre. Not only is it a powerful myth that animates millions, but it is also vulnerable to being subverted by generations of playwrights. Like an aged boxer, it is liable to being floored by a well-aimed punch. In Bruce Norris’s new play, which premiered in New York earlier this year and opened in London tonight, comedy is the kick that topples the great giant of the American mythology.

The theme of Clybourne Park is race and property. As one character helpfully says, “The history of America is the history of property.” In the first act, set in 1959, we are chez Russ and Bev, a fortysomething couple in suburban Chicago. As jaunty music plays and the sun floods into their lovely home, designed by Robert Innes Hopkins, it is soon apparent that everything is not well. They are moving because their son, a Korean War vet who was accused of war crimes, has hanged himself in their house, and Russ is haunted by the death. But this family tragedy takes on another dimension when Russ and Bev are visited by the younger Karl and his deaf wife Betsy. Karl, who represents the local community objects to the house being sold to a black family and predicts a dire future for the whole neighbourhood. He’s openly racist, which goes down very badly with Russ and Bev. Worse than that, their black servant, Francine, and her husband Albert, are not overly happy either with this kind of talk.

In the second act, which is set in 2009, the house is a wreck. Karl’s dire predictions about the neighbourhood have proved to be partly correct, although it has recently recovered from the drugs and crime epidemic of the 1970s. Yet right now the local community is dominated by the black middle class and although this particular house is in an advanced state of dilapidation, the neighbourhood is on the up and up. Now the tables are turned. The new incomers are not black, but white. Namely a middle-class couple, Steve and his pregnant wife Lindsey, who want to buy the property in order to pull it down and build a new modern house. Gentrification marks the restatement of the American Dream. But the local community, represented mainly by Lena and Kevin — a black couple — have certain concerns that this big new house will destroy the local townscape.

Norris has a wicked arsenal of cruel one-liners that pop around the lovingly recreated rooms, designed by Robert Innes-Hopkins, bouncing along the floor or jumping up to smack an unsuspecting character in the chops. He also has a superb command of theatre form and one of the many joys of this lively and enjoyable play is to see the care he has taken to echo the 1959 scene in the contemporary one. In each, there is a pregnant woman, in each there are unwelcome incomers, in each, racial stereotypes are inverted, in each, an old army chest holds an explosive secret. But the sharpest tool in Norris’s box of tricks is his sense of humour.

In the final showdown between Steve and Lindsey, on one hand, and Lena and Kevin, on the other, a series of jokes are told, each of which is more tasteless than the previous one, and the telling of which is a competition between the blacks and the whites. Not only does this allow Norris to indulge in the joys of politically incorrect transgression, but it also plays on what one character calls our “latent fears”. Humour releases tensions. Here, there are jokes that despise blacks, and jokes that hate women. Yet the most taboo-busting joke is told by a black woman at the expense of white women. The effect is cathartic — and left the audience howling with delight.

As well as the antagonism between races, Clybourne Park also shows tensions between couples. In Dominic Cooke’s thoroughly enjoyable production, there is a mix of acting styles, with some characters being cartoonish and others played for real, especially in the first part. The same cast plays different characters in the first and second halves: Martin Freeman is excellent as the ghastly racist Karl and the truth-telling Steve, Sophie Thompson excels as the grimace-queen Bev and later plays a lawyer, while Lorna Brown and Lucian Msamati make the black couples into agents of quiet subversion in the first part and blatant anger in the second. Mention must also be made of Steffan Rhodri as Russ and Sarah Goldberg as Lindsey. Yes, there are few sights as entertaining as watching the American Dream being dragged on stage and given a good going over.