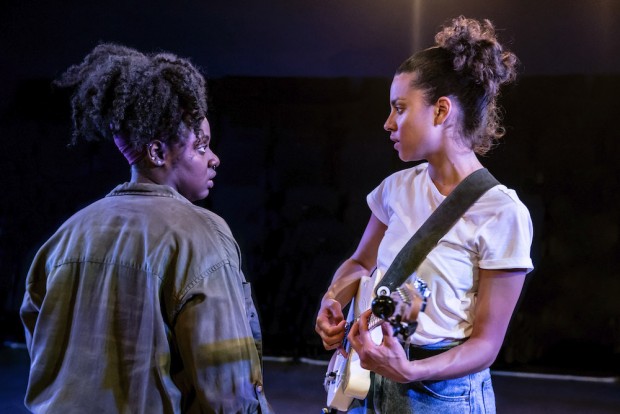 Identity politics has been around for decades. But it’s always good to revisit the subject. One of the great things about the Bush Theatre in West London is the fact that it not only stages new plays by a diverse range of playwrights, but it also successfully revives modern classics such as Winsome Pinnock’s Leave Taking and Caryl Phillips’s Strange Fruit. Now it is the turn of Scottish poet, novelist and playwright Jackie Kay, with this revival of her 1986 play, Chiaroscuro, presented this time in the exciting form of gig theatre.

It’s a story about female friendship: although one of its central aims is to question simple categories as they apply to women, it is necessary to introduce the main characters according to precisely these kinds of restrictive labels. So here are the play’s four women — Beth, Aisha, Yomi and Opal: Beth is an outreach worker in Haringey whose heritage is West Indian, Aisha works as a carpenter and is named after her Asian grandmother, Yomi is a single mother whose family came from Nigeria, and Opal grew up in care, with mixed parentage. In Kay’s imaginative conception, each of them owns a symbolic object: Beth’s is a family photo album, Aisha’s an embroidered cushion, Yomi’s a little black doll and Opal’s a cracked mirror. These symbols are used to help structure the narrative.

The story, such as it is, concerns the love affair between the confident Beth and the more uncertain Opal, from their initial meeting in a café to glimpses of their life together. In one crucial incident, Aisha holds a dinner party, inviting her three friends, and introducing Beth and Opal to Yomi. Things do not go smoothly, however, mainly because Yomi doesn’t know that Beth and Opal are a couple, and anyway has some politically incorrect views about mixed-race people. Beth gets defensive on Opal’s behalf and the evening ends badly. Later on, Yomi tries to confront her own anti-lesbian prejudices and Aisha has to come to terms with her thwarted affection for Beth.

Kay’s play is both a celebration, and a questioning, of black queerness, and of women’s lives in all of their complexity. Drawing on her own mixed-race heritage and sexuality, she writes with a rare passion and poetry. At the same time, her characterization is quite bitty and the storytelling is sketchy. Yet Kay’s writing is so full of life, so exuberant that it’s hard to be too harsh: her keynote here is briskness, and she doesn’t pause very long to delve too deeply into her creations. Likewise, Lynette Linton’s lively production, her first as artistic director of this venue, has abbreviated the original two-act play into a 90-minute gig, set in a recording studio designed by Moi Tran, and with most of the 1980s references cut. The result is bright, warm and occasionally wonderfully joyous.

The latest play in the Bush’s ongoing “Passing the Baton” series, dedicated to reviving rarely seen work by artists of colour, Chiaroscuro proves that sometimes in the theatre you don’t need to provide answers: it is sufficient to ask the right questions. Kay, who is Scottish poet laureate, explores not only the complex web of feelings between mothers and daughters, but also suggests some of the loneliness and emotional anguish of love and relationships. Linton’s directing is sensitive to these shifts of feeling, and she is good at following the currents that ebb and flow through the writing, using music as the perfect accompaniment, with the cast laying down tracks and keeping up a satisfying improvisatory feel. And there is no shortage of touching moments.

The serious themes of the play are suggested by its title, which evokes lightness and darkness, and definitions of race are troubled in its account of the feelings of queer women. In almost every short episode, the restrictive notions of racial or sexually purity are vigorously, if briefly, questioned. Debates about identity, and the importance of names and naming, snake through the action, and Kay’s unsentimental view of the realities of black female experience comes across as freshly as ever. Underlining everything is the simple point that all people are diverse in their feelings and experiences. In this production a very talented cast of actor-musicians animate the incidents with composer and actor Shiloh Coke’s excellent music, which ranges from soulful solo melodies to rocky band numbers.

Live music and spoken word mix, not always comfortably, in a show that plays to the considerable strengths of Coke (whose Beth is amusingly incisive and level-headed), Anoushka Lucas (fragile Opal), star singer Preeya Kalidas (smooth-voiced Aisha) and Gloria Onitiri (feisty Yomi). But however warmhearted, with its sparkles of wit and perceptive insights into what makes all of us human, it has to be admitted that both the characterization and plot are patchy, and that Kay prefers poetry and song over traditional forms of playwriting. Yet if you’re happy to go with the flow, then you’ll certainly enjoy this sensitive and emotionally true show.